Looking very like a pulp black & white talkie Western of the 30s, this Tex Ritter vehicle (it was his sixth Western of 1944) is nevertheless great fun as a straight-down-the-line old-fashioned oater.


It’s a standard tough-marshal-cleans-up-the-town plot. Tex is naturally the marshal. Gunsmoke is a funny name for a moral town that despises outlaws but there we are. Tex’s brother (Russell Hayden) is a lawyer inveigled into defending the bad guys at the behest of the wicked rich rancher (Harry Woods) but he soon sees the error of his ways and joins the side of right and truth. Actually, Russell should have stuck to his guns (or gunmen) because Marshal Tex seems to want to deny the bad guys a defense and he thinks they are guilty till proved innocent, which wasn’t very proper for 1944. Still, Tex wins and has a cheesy song (he croons it in the marshal’s office while they are voting, rather than on his horse). Mr. Ritter looks a bit dudish in his costume riding his all-white stallion. Like Hopalong Cassidy, he goes for all black. 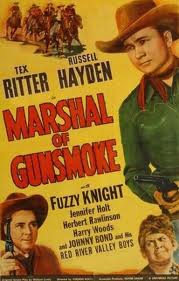 Fuzzy Knight, who was the comic relief in hundreds of films, many of them Westerns, is the stalwart deputy, Glow-Worm Johnson, and he has an electrical gadget which gives people shocks and is the source therefore of much hilarity.


There are one or two good lines. When Fuzzy is called a little shrimp he says those are fighting words where he comes from. “They’re fightin’ words where you come from?” Fuzzy replies, “Yeah. That’s why I moved.” 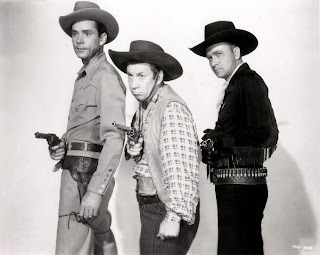 
This is never going to make anyone’s list of best Westerns ever made, I fear, but as a low-budget mass-produced horse opera, I’ve seen worse. 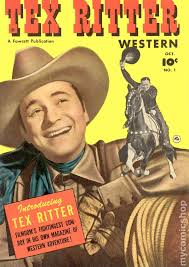