A cut above the usual Duke B-Westerns of the 30s

While Born to the West is in many ways just another 1930s John Wayne 59-minute B-Western, it has something extra.


This was because the long series of programmers he had done for Lone Star Productions, distributed by Monogram (16 movies, 1933 – 35), had continued more or less unchanged when Monogram was absorbed into the new Republic Pictures in 1935, and Duke went on churning out black & white B-Westerns – he did eight more. But then in 1937 Paramount took him up for a single Western and they based it, as they had done many before with Randolph Scott, on a Zane Grey tale (this time a short story). 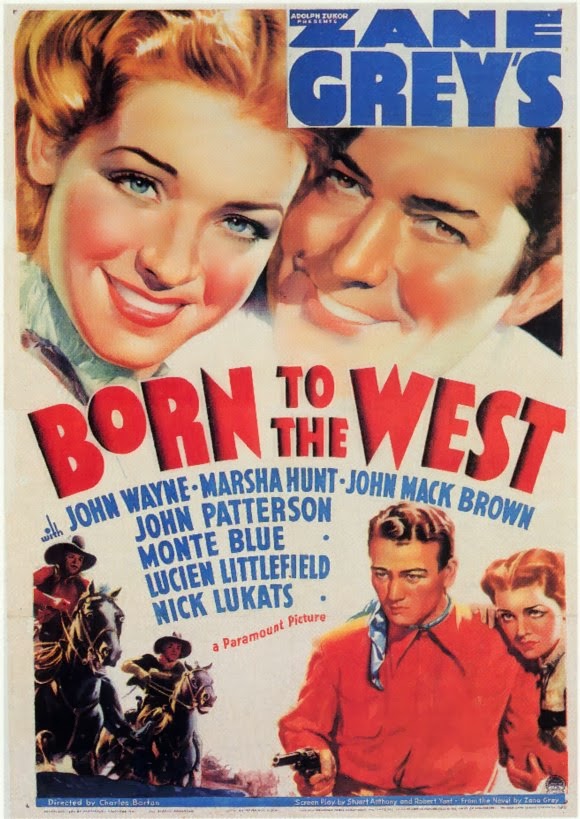 A B-movie but with Paramount budget
As such, it had something Wayne hadn’t seen much of since he’d done The Big Trail for Fox in 1930: budget. It was helmed by Charles Barton, a Paramount contract director whose first feature had in fact been one of those Zane Grey/Randolph Scott oaters, Wagon Wheels (1934). He’d done a Buster Crabbe number, Nevada, then the very old-fashioned Rocky Mountain Mystery, again with Scott, and this was his fourth Western. Not that it’s a huge Paramount production or anything; we’re not talking Gary Cooper in The Plainsman here. It was still a 59-minute B-picture. But it had a rather classier look to it than all those Lone Star jobs and was a million miles above the crummy zero-budget Westerns poor Wayne had to do for the miserly Harry Cohn at Columbia in the early 30s.


There are some classy wide shots of cattle, probably Paramount stock footage but hey. The production values look high anyway. 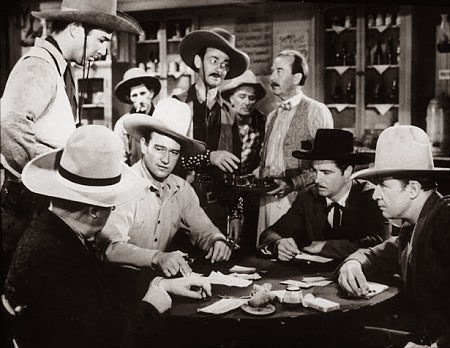 He says he's the best poker player west of the Mississippi
It featured one ‘John Mack Brown’ as the decent good-guy rival to Wayne for the girl’s hand. Johnny was trying out a slightly more grown-up handle John and does in fact appear almost statesmanlike in this role as rich cattleman. He soon went back to the ‘Johnny’ though.


Duke’s sidekick (they were kinda obligatory then) is lightning-rod salesman Dink Hooley (Sid Saylor). He’s quite amusing, I guess. Saylor did 127 Westerns, 1926 – 1956, so was pretty much of a fixture on the range. 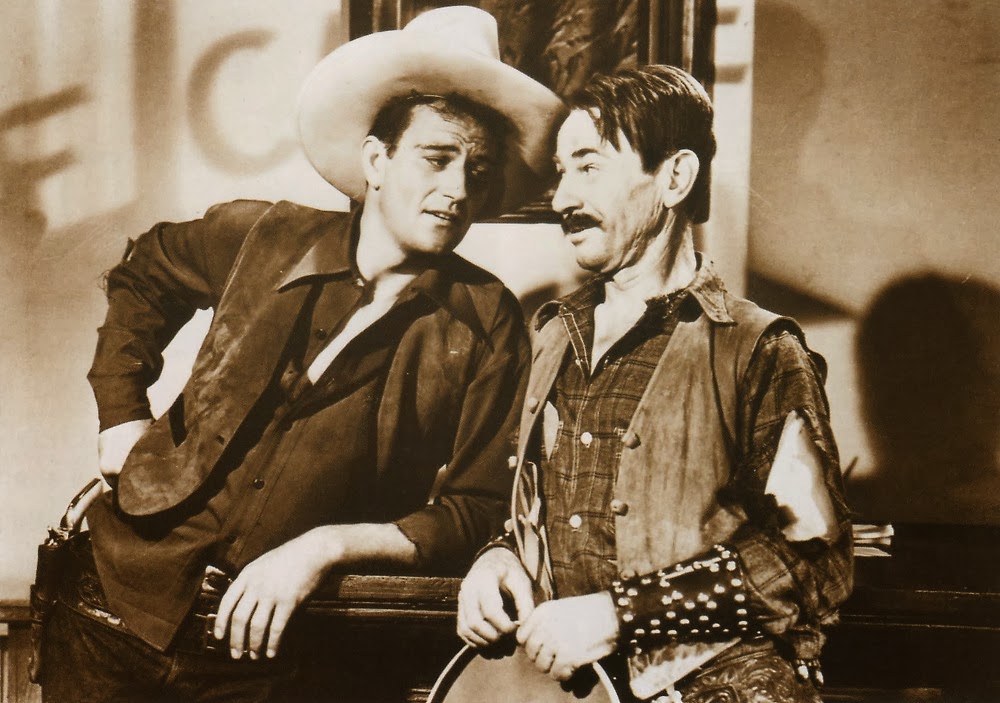 With sidekick Sid Saylor
Good old Monte Blue is the bad guy who wants to rustle Johnny’s – sorry, John’s cattle. Monte did 111 Westerns, 1927 – 60, so by the time of this one was also already something of a stalwart. He’d been a cowpuncher and ranch hand and had done stunting for DW Griffiths at Biograph. He became a silent star opposite Gloria Swanson and Clara Bow. He managed the move to talkies quite well but somehow got relegated to minor parts.


The dame is Marsha Hunt, who did only five Westerns and some TV shows. Johnny loses out because she chooses John.


Some old faithfuls are there. Earl Dwire is a cowhand and Al Ferguson is the bartender. We do kinda miss Archie Stout behind the camera and Yakima Canutt doing the stunts, though. 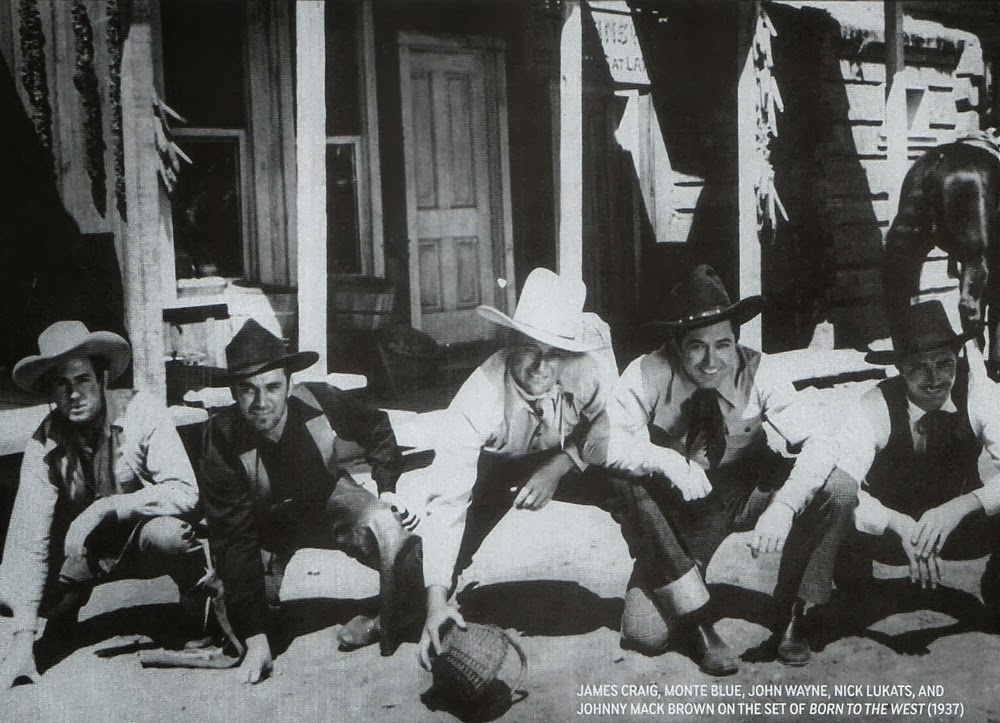 On the set. 'John' Mack Brown on Duke's left.
Wayne is much more at ease in this movie, quite relaxed and delivering his lines with a certain panache. The lines are better, mind.


The re-release title Hell Town was a bit of a cheat because it’s basically a cattle-drive movie and the town, when they get to it, isn’t particularly hellish at all.


After this one-off for Paramount, Duke went back to Republic to do eight Three Mesquiteers pictures as Stoney Brooke, four either side of Stagecoach in 1939. He was on his way back to stardom. But for me, this movie and The Telegraph Trail (Warner Bros, 1933) are the best of the lesser movies he did in the 1930s while waiting for John Ford to pick him up again and forgive him for being launched by Raoul Walsh. Worth a watch, pardners.