RN Bradbury directs a one-hour black & white Western photographed by Archie Stout in which the hero, John, played by John Wayne, aided by an old-timer, Gabby Hayes, foils the baddies (among whom is Earl Dwire) led by Yakima Canutt. In doing so, John wins a winsome girl in 1930s clothes. We have ridin’, shootin’, fisticuffs and a good Yak stunt or two. John turns out to be an undercover agent and rides off into the sunset with the girl.


There. That’s it. That describes 99% of the programmers Wayne made for Lone Star Productions in the 30s, while he was wanderin’ the lonesome trail between his big-picture starring roles in The Big Trail for Raoul Walsh in 1930 and Stagecoach for John Ford in 1939. 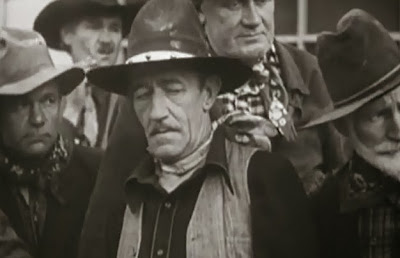 Classic villain: Earl Dwire
However, the fact that the stories were formulaic and predictable doesn’t mean they weren’t huge fun. You can cheer for the hero, chuckle at his sidekick and hiss the villain. You can thrill to the fights and smile aahhh when he gets the girl. What more do you want? 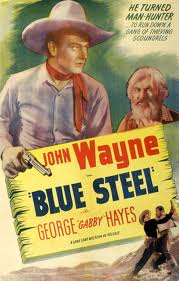 Enjoy
Blue Steel is a classic example. A town is treed by smiling villain Malgrove (Edward Peil). He knows there’s gold under the fields of the homesteaders hereabouts and is determined to buy them out cheaply to get his greedy hands on it. He does this by starving the remote town out. No supplies are allowed to get through and each time wagons or pack mules nearly make it to the famished farmers, the men bringing the food are brutally shot down by Malgrove’s henchmen and the grub is hidden in a mine. 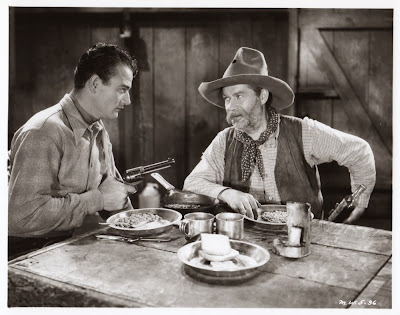 Duke and Gabby
Undercover US Marshal John Carruthers is sent to find out who is commanding the outlaws and foil the wicked scheme. There’s a hilarious opening scene worthy of a Victorian stage melodrama as a wildly over-made up John (with a fetching shade of lipstick) sneaks into a hotel lobby and hides, and the Polka-Dot Bandit (Yak) robs the safe. 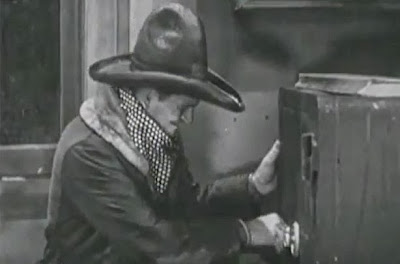