A Christmas treat for you: 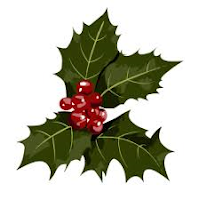 Only a Western in the very vaguest sense, this is a stupendously good Laurel & Hardy comedy which has Stan & Ollie going to Brushwood Gulch to look for a Mary Roberts (Rosina Lawrence), to give her the deed of a gold mine that her uncle, Stan & Ollie’s partner, has left her, only to find that the saloon moll Lola Marcel (Sharon Lynne), at the behest of crooked saloon keeper Mickey Finn (James Finlayson), impersonates Mary to gain control of the mine.


Once the intrepid pair have realized this, the comedy comes from their efforts to get the deed back, which result in, among other normal occurrences, a mule hoisted up to the upstairs window in the place of Ollie. 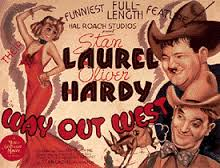 There is an absolutely charming dance by the two in front of the saloon while The Avalon Boys sing, perhaps the highlight of the film. This soft-shoe routine has been described as “casually sublime”. And one of the Avalon Boys was Chill Wills, who also dubbed the bass part when Stan joined in a duet of ‘On the Trail of the Lonesome Pine’ with Ollie, another top moment. 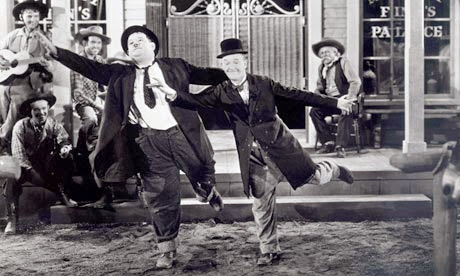 It is said that James Finlayson’s “Doh!” when he accidentally fired his gun in bed gave rise to Homer Simpson’s catchphrase.


It’s little more than an hour but it is an absolute delight. Of course all famous comedy acts had to do a Western and there are some splendid examples from Buster Keaton, the Marx Brothers, WC Fields and Bob Hope among others. This one is up there in the higher ranks. There’s an excellent quality DVD with remastered print. 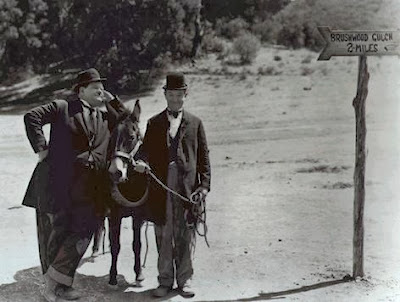