Heat on the Hudson

There have been film and TV versions of The Last of the Mohicans a-plenty between 1911 and 1992 and doubtless there will be more. My favorite is the Randolph Scott one of 1936. When James Fenimore Cooper wrote the books in the 1820s they were Westerns. They told tales of daring on the frontier a half century before, which is what early- and mid-twentieth century Western movies did. The introductory titles of this film set the scene for us “On the frontier, west of the Hudson River”. Now, to the fan of ‘proper’ Westerns the Hudson is hardly the West and stories of men on foot and French and British officers in tricorn hats and swords don’t really make the cut. Still, Daniel Day Lewis, who is excellent as Nathaniel (the man of many names – Pathfinder, Hawkeye, Natty Bumppo, La Longue Carabine, etc.), is a Western hero in that he knows the ways of the wild, is a brave fighter, shoots straight, is something of a loner and does what a man’s gotta do. So I guess we can let it pass. 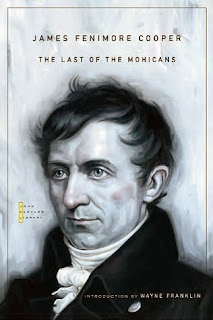 Not the liveliest of reads
This is a big production with a mega-budget, lots of action and a cast of hundreds, who were nothing beside the crew. The credits go on and on. I know that these days they feel obliged to give great prominence in the credits to those who supplied hamburgers to the driver of the hairdresser’s assistant but still, rarely can so many people have worked on the production of a movie. The credits take about as long as the film. 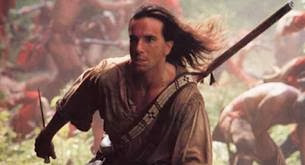 Action Dan
It’s visually attractive, photographed by Dante Spinotti in North Carolina. There is a slight hint of 1990s romantic soft lighting and backlit close-ups of faces, like shampoo ads, as the lovers stare into each other’s eyes. This atmosphere is reinforced by the music, by Randy Edelman and Trevor Jones, which is swirling and sometimes ponderous and occasionally breaks out into early 90s Clannad-style nostalgia. The lerve in the forest reminds you a bit of modern versions of Robin Hood. 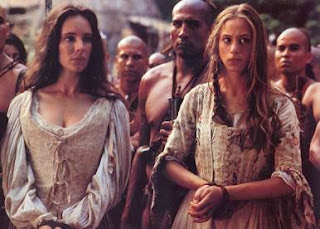 Beauty
As for the acting, to support the excellent Day Lewis (who, we are told, lived in the wild for a month or two to get into the spirit of the part, which is taking method acting a bit far) we have two very attractive young women, Madeleine Stowe and Jodhi May, and they do well.  The elder is spunky and brave and the younger is (really quite astonishingly) beautiful and fey. Steven Waddington does a solid job as the tiresome, pompous major who does the right thing in the end (and he seems to speak good French, so full marks there). The rest of the yanquis are alright but it’s the Indians who steal the show. Russell Means is a noble Chingachgook and Eric Schweig, later to play even better Indians (especially in The Missing), is superb. But best of all is Wes Studi as Magua, a truly worthy foe of Hawkeye – you really need a strong Magua and many versions are let down by their Maguas. Studi is simply magnificent. 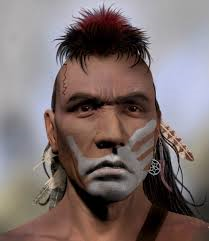 Scar-eee
The director, producer and co-writer, Michael Mann (I like Heat), had apparently never read the novel and that might have been just as well for the book is mighty slow. Have you ever tried reading the Leatherstocking tales? Boy, are they long. I have them on my iPad and just the first one (chronologically) is over 6000 i-Pad pages. This film really does extract the action bits and squeeze them into the 107 minutes. The film never pauses even for them to reload their single-shot rifles, which they fire with extraordinary rapidity. 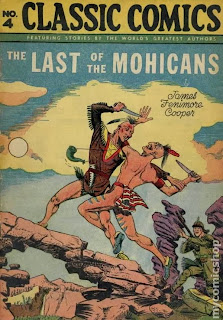 Gripping stuff
Of course the whole plot is really ineffably silly. What are posh upper-class English gels doing walking around the Indian-infested American forest in the first place, and why did their daddy let them go off with the Indian? Still, since when did we complain about Westerns on the grounds of improbable plots…


There’s supposed to be a 1999 re-edited director’s cut but I have only seen the original.

That's a longue carabine
Anyway, you could do worse than have a look at this version, if you think that Mohicans tales are Westerns.

Did they have cell phones then?