Gay Western? If you say so.

Johnny Mack Brown made a great number of Westerns between 1927 and 1965. He was quite handsome, a former star football player and had featured on Wheaties cereal boxes, a sure road to fame. He could jump athletically onto a horse. He was Billy the Kid in King Vidor’s movie of the same name in 1930, his only ‘big’ picture, although he was also Joan Crawford’s love interest in Montana Moon. He made nine Westerns in 1948 alone. He was a hero in many kids’ serials for Universal. 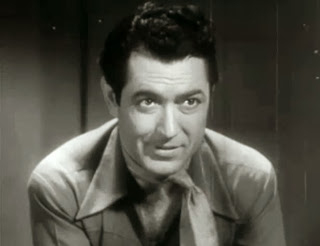 The Crooked Trail, aka Crooked Trail and Lead Law, is no better or worse than the others. Written by veteran screenwriter George H Plympton, who churned out the screenplay of nearly 300 movies of every genre, and directed by workhorse S Roy Luby (mostly used as an editor), Crooked Trail or The Crooked Trail tells of how Johnny saves the life of sneering badman Harve Tarlton (John Merton) and tries to reform him by making him a partner, free, in his gold strike. Harve, though, is a ne’er-do-well and sits around all day doing no panning and coveting both Johnny’s gold and his wife Helen (Lucile Browne) in her tight frizzy 1930s hair. 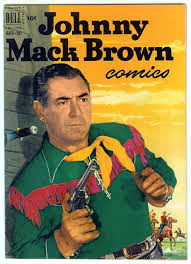 It’s one of those Westerns where two characters sit talking for a long time telling each other the plot. Then a Greek chorus of miners come along and fill in the gaps.
Some people say it’s actually a gay story but I couldn’t see it myself. 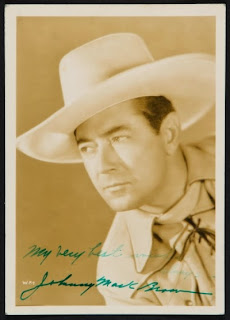 Johnny is a bit too good to be true and also rather dopey as everyone but him (even the dumb blonde and the town drunk) realizes Harve is up to no good. But there’s a fair bit of ridin’ and shootin’ and a showdown at the end.