Silver Rock (1953) is a modern Western, about a war hero, Tully Gibbs, back from Korea, who wangles his way into the trust of his dead fellow serviceman’s dad and sets up a mining operation in (probably) Colorado. But the period setting is unimportant because it is a Western to all other intents and purposes, with a man doing what he’s gotta do, beating the bad guys and winning the day – and girl. It could easily have been set in the 1880s or with the hero back from the Spanish-American war, for example.


Luke Short (Frederick D Glidden, 1908 - 1975) was one of the great writers of Western fiction. His books, from The Feud at Single Shot in 1935 to Trouble Country, published posthumously in 1976, were classic, straight-down-the-line short paperbacks, tightly plotted, authentic, with strong characters and with lots of action. They were not ‘literary’ but neither were they pulp. Several were made into films: Gunman’s Chance, Station West, Ambush, but in particular three excellent tales which made splendid movies, Ramrod (1947, directed by André de Toth and starring Joel McCrea and Veronica Lake), Coroner Creek (1948, directed by Ray Enright and starring Randolph Scott and Edgar Buchanan), and Vengeance Valley (1951, directed by Richard Thorpe and starring Burt Lancaster and Robert Walker). 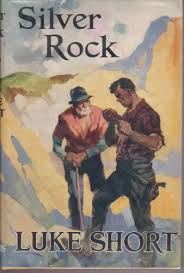 In Silver Rock you’ve got an interesting take on early 1950s small town America, with its respectable and less respectable characters. The truth-telling, wry, slightly cynical newspaper editor is a well-known Western figure. Here, Sam Horne is a classic example. He takes a shine to Beth Hodes, decent sister of Ben Hodes, the rich bad guy who tries to stop our hero Tully. Part of the reason for Ben Hodes’s enmity is jealousy over the lovely Sarah, and the protagonist and antagonist slug it out over her. Ben hires a minion to sabotage the mining equipment and shoot at the miners (a weakness of the book is that this fellow is never mentioned again) and he also bribes one of the County Commissioners, so we get another aspect of the small town West, corruption.


There’s some good description of the bulldozing of a road and starting the mine but while the detail sounds authentic it is not too technical and doesn’t get in the way or sound as if we are having to sit through a lecture on ore extraction. 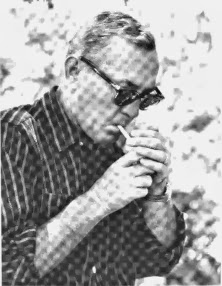 Well, it’s pretty predictable perhaps how it’ll all turn out. Still, the fact that Sarah discovers Tully’s initial dishonesty (he wrote false letters to the father from the dying son) and how Tully deals with that is interestingly done.


I wouldn’t put this one at the very top of the list of great Luke Short Westerns, but you’ll enjoy a read of it if you come across the paperback somewhere. If you’re new to Short, start with Vengeance Valley and Ramrod – they are really good. But none of the 52 books will disappoint you.