Sergio Corbucci spaghetti westerns are supposed to be (according to spaghettisti) at the upper end of the quality scale but there is nothing to distinguish Minnesota Clay from the other turgid pulp movies of the genre.


Cameron Mitchell from The High Chaparral (excellent as the bad guy in The Outcasts of Poker Flat, good as Daly in Garden of Evil and very fine as the sheriff gone bad in Hombre, also stalwart of many TV western shows) was by no means at the end of his career (he made films till his death in the mid-nineties) but in this mid-sixties flick he looks tired and overweight. He is a gunfighter wrongly imprisoned who breaks out of a prison camp to get revenge. After that, the movie is a straight Yojimbo copy, as so many spaghettis were, because Mr. Clay finds a town dominated by two gangs, tries to play one off against the other and gets beaten up for his pains. One difference here is that he is going blind, which makes the final sub-Pale Rider gunfight problematic (although of course it doesn’t stop him wiping out all the professional gunmen). 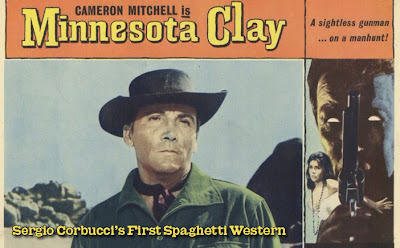 First of eighteen, unfortunately
The Ortiz gang is led by Fernando Sancho, who has exchanged the red uniform of The Man from Nowhere for a black one. Otherwise he is the same. The rival, non-Mex outfit is bossed by Georges Rivière, who was probably chosen as the winner in a Lee Van Cleef lookalike competition. Unlike Cameron, he was at the end of his film career, which was very cosmopolitan and picaresque (he made bad films all over Europe). Both gangsters have suitably nasty heavies. Ortiz seems to have most: Minnesota shoots down twenty with twenty consecutive pistol shots in a siege before being burnt out (in this version of the story he is captured after the fire). These films often seem to have been censored. At any rate we don’t see Cameron being beaten up. The make-up department has the job of indicating his suffering.


Filmed in Spain with the usual indifferent photography (Jose Aguayo) and dire soundtrack, the movie also suffered from bad acting and slow-paced direction. The dialogue (Corbucci and Adriano Bolzoni) is hackneyed.
Argentine Ethel Rojo, in very sixties bikini top, make-up and hair, is the duplicitous girl of Ortiz who gets her just deserts. We expect Minnesota to fall for her but he doesn’t, in the least. In fact he can hardly bring himself to be civil to her and he wipes off her kiss. So much for love interest. Probably just as well. As a precursor to going blind, Clay sees double, so he unfortunately has to deal with two of her. 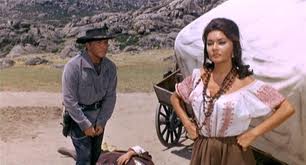 Not interested (well, he was blind)
One heavy has a sawn-off Winchester in a holster so had obviously been watching Steve McQueen on TV.


This is no worse than other spaghetti westerns and if you like the genre you’ll be able to watch it. But it’s no better either. In fact it’s just the nth remake. The worst part about it is Cameron Mitchell sleepwalking through his role. He quite obviously can’t wait for the final shout of “That’s a wrap!” so he can get on an Iberia flight for Los Angeles and bank the $14.50 he’s going to make in royalties.