How the West was fun

Most Western fans of a certain age have a soft spot for the Maverick TV series and associate James Garner first with Maverick and only afterwards with Rockford or other roles. Of course Gunsmoke was the main attraction and Have Gun, Will Travel probably came next, followed by any number of great TV shows like Wagon Train, Cheyenne and Wells Fargo. And in Maverick Jack Kelly was alright. Robert Colbert and even Roger Moore put in a performance as occasional brothers. But it was Garner who made it. That charming faux-cowardice hiding secret grit and the constant “as my Papy used to say…” made the gambler Maverick into a great Western archetype.


Sometimes, when attempts are made to translate these series to the big screen, they fail utterly. Especially more than thirty years on. 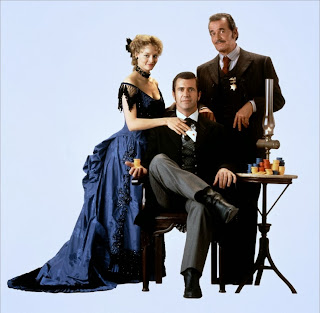 Excellent, all three
So it was a huge delight in 1994 when the movie Maverick came out and was real fun. Mel Gibson (whose pet project it was and whose Icon company produced it) was outstanding as Bret. He must have studied old Maverick shows and he caught the mannerisms perfectly. He even looked like Garner.
The writing, by William Goldman, was also extremely competent. He was the guilty party in Butch Cassidy and the Sundance Kid (a weak Western in which the writing was the weakest part) but had clearly improved a lot. There are great lines, a clever plot and a lot of classic Maverick humor.
And, as if that weren’t enough, James Garner was in it too.

Garner plays rough
It was really odd at first when he (the lawman Zane Cooper, known as Coop) talks to Gibson and refers to him as ‘Maverick’. It took some getting used to.


Graham Greene is terrific as the forward-looking Indian chief and Alfred Molina excellent as the evil Angel. There’s James Coburn as the conman commodore. Jodie Foster is fine as the voluptuous gambler lady. We even get Denver Pyle (white-bearded and, ahem, imposing) as a poker player. The whole Mississippi river boat (a fine one, by the way) is in fact populated by country singers or former TV Western stars. One of the poker players was the great heavy Leo Gordon, who wrote some episodes of the TV Maverick. Others were Doug McClure, Robert Fuller, James Drury. Bert Remsen is there – his very first Western appearance, in 1957, was in a Maverick episode. Wishbone, the cook from Rawhide, drives the stage. Dub Taylor (247 Westerns) is the room clerk. 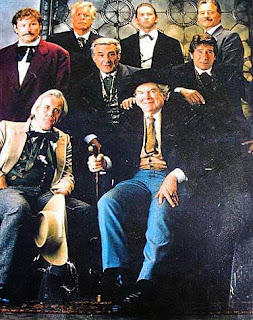 Doug McClure back row, left. Robert Fuller, center row, right.
Dig the Lethal Weapon references when Danny Glover and Mel Gibson appear to recognize each other during a bank robbery. Danny even says he is too old for this expletive. 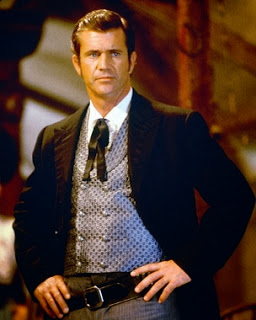 Bret
There’s the famous Canutt stunt as ‘Maverick’ goes under the stage and leaps from horse to horse. There’s some splendid scenery: the Grand Canyon, Yosemite, the Columbia River Gorge and up at Lone Pine. First class photography by Vilmos Zsigmond (who also, briefly, appears). Fun music by Randy Newman.  There’s nothing wrong with this film. 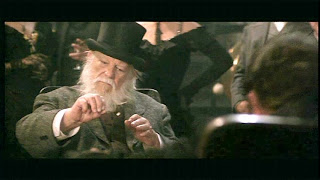 The mighty Denver
And the ending, the first time you see this movie, is hilarious and so, so right. Even on repeat viewings you can’t help smiling at it. 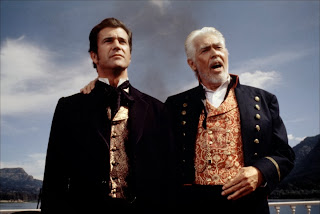 With Commodore Coburn
The movie appeals hugely to decrepit Western fans like your own Jeff but would also be attractive to a new generation who, poor things, never saw the original Maverick on TV in the 50s. Mel Gibson is far from my favorite actor; this movie and Payback were the only good things he has ever done and he has appeared in and promoted some disgraceful junk. But full marks to him, and Warners and director Richard Donner (who had done quite a lot of Rifleman episodes and Lethal Weapon). They made an adorable Western.