Hombre was Elmore Leonard’s fifth Western novel and came out in 1961. I have been an admirer of the movie of the same name since it appeared in 1967 and in fact I did not read the novel until much later (I see I bought my copy in Salt Lake City in 2003). Mr. Leonard’s novels are so good and in this case the film and book are so different that a great deal of enjoyment can be got from both.


I have already commented on the movie and you can read more by clicking the link. I have never been the greatest fan of Paul Newman’s Westerns: his method acting is tiresome in The Left-Handed Gun; The Outrage is an overwrought drama; Butch Cassidy and the Sundance Kid, though one of the most famous of Westerns, is essentially a weak example of the genre; and both The Life and Times of Judge Roy Bean and Buffalo Bill and the Indians are more frontier burlesque than genuinely good Westerns. But I forgive him all for his John Russell in Hombre. He captured exactly Leonard’s blue-eyed Apache. 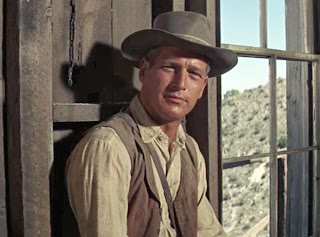 Newman as Russell
Leonard took as his starting point the fascinating story of one Jimmy (Santiago) McKinn. In May 1885 on a farm in the Mimbres Valley of south-west New Mexico, eleven-year-old Jimmy McKinn was kidnapped and his brother killed by Geronimo and a band of Apaches. The boy’s father, who had been away in Las Cruces at the time, gave chase upon his return and was relentless in his efforts. We think of films such as The Searchers or The Missing. But after finding his son’s coat with a bullet hole in the back, the poor man gave up and gradually descended into insanity.


In fact, however, the boy had been taken by Geronimo into Mexico where the band was pursued and eventually trapped by General Crook, and Santiago was among them. The party escaped but was later caught again, by General Nelson A Miles. A reporter, Lummis, wrote   "When told that he was to be taken back to his father and mother, Santiago began boo-hooing with great vigor. He said in Apache—for the little rascal has already become quite fluent in that language—that he didn't want to go back—he wanted to always stay with the Indians. All sorts of rosy pictures of the delights of home were drawn, but he would have none of them, and acted like a young wild animal in a trap. When they lifted him into the wagon which was to take him to the [railroad] station, he renewed his wails, and was still at them as he disappeared from our view." 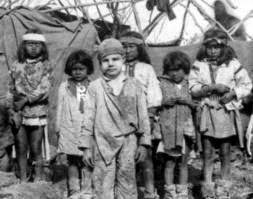 Jimmy Santiago McKinn. It looks to me as if he has the other Apache kids Under his thumb.
Later the reporter wrote, "Santiago McKinn, the 11-year old white boy, the Apaches' prisoner taken with Geronimo’s band, will be sent home tomorrow. It is learned that his parents were not killed, but reside at Hot Springs, at Hunter's, N.M., near the railroad from Deming to Silver City. During his half-year of captivity the lad had grown fully Indianized. He joins their sports, and will have nothing to do with the whites. He understands English and Spanish, but can hardly be induced to speak in either. He has learned the Apache language and talks it exclusively." 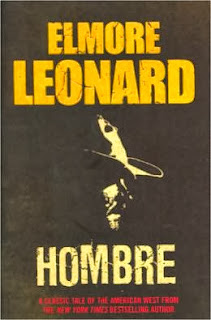 Great book
It really is an extraordinary tale. Elmore Leonard only used it as a spur to his creativity and the novel Hombre does not in any sense tell the true story as it happened. But it gives a ring of authenticity to his John Russell. In the story Russell had spent the period of his life between the ages of six to twelve with the Apaches. If the real Santiago had become so “Indianized” after only six months, how much more Apache would Russell have been!


The book is told in the rather charmingly stilted first person by Carl Allen, a young man who works for the Hatch & Hodges stage line in Sweetmary, AZ – a common setting for Leonard Westerns. This Carl was changed to ‘Billy Lee’ in the film and the boy is less central to the action, but in the book his voice is the strongest, more even than Russell’s.


Carl is not married and accompanies on the stage ride a person he refers to always as “the McLaren girl”, a young woman who has been held captive by the Apaches for a month and is now going home.


The movie usurped the chief badman’s name, Braden, for a sheriff gone bad who joins the stage robbers. There is no such sheriff in the book. Frank Braden is the head of the gang, the ‘Cicero Grimes’ figure played in the movie so well by Richard Boone. No matter. The book’s Braden is a classic Leonard villain, fearsome and effective. His henchmen are good too, especially the unnamed Mexican. The other surviving badman is named Early but I don’t think it can be Leonard’s character of later stories Brendan Early…


The other film characters do appear in the book: Mendez the stage driver (though he is more pusillanimous in the book), Dr. and Mrs. Favor – the crooked Indian agent and his estranged wife.


The book obviously owes something to the 1939 movie Stagecoach, by its plot and theme (Favor as the Berton Churchill crooked banker figure, Russell does the Wayne ‘Ringo Kid’ savior part), as it does to the Ernest Haycox 1937 story Stage to Lordsburg and Maupassant’s Boule de Suif published in 1880. But those are only influences; it’s not a retelling of any of those stories. 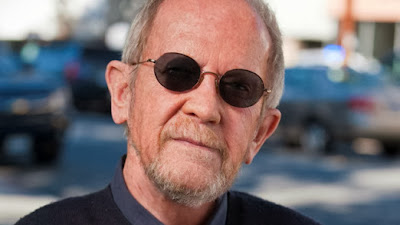 Elmore Leonard, one of the greatest writers of Westerns
When you’ve seen a movie, often, and really like it, you can’t help transposing the film’s interpretations of the characters onto a later reading of the source novel. So I tend to see Paul Newman when I read about Russell. Newman captured the book’s hero so well that this isn’t a problem. I loved Diane Cilento’s Jessie in the film but I think the McLaren girl is even more interesting. Another aspect stronger in the book than in the picture is how decent but plain dumb the rest of the passengers are and how cold but obviously right Russell is. Russell is a classic Western hero, tough, knowing, experienced, a survivor, but essentially a loner. The others are poor, weak humans.


It’s a first class book, one of Elmore Leonard’s best – and that’s saying a lot.