Roger Corman (b 1926) is one of the pillars of the film industry. In the early 1950s he started putting together B-movies on a shoestring budget and he went on to churn out dozens and dozens of pictures. He wrote an entertaining autobiography, How I Made A Hundred Movies in Hollywood And Never Lost A Dime. In 1955 he first sat in the director’s chair with a very B-Western, Five Guns West, made on the cheap (only $60,000!) but with actually quite good acting, and in the following year he came out with the almost laughably bad Gunslinger which is nevertheless weirdly watchable. 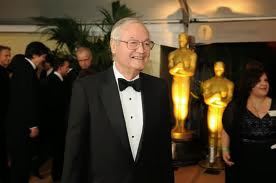 Roger Corman. He didn't win too many of those Oscars for his movies. But he was awarded an honorary one in 2009 "for his rich engendering of films and filmmakers".
Now if I tell you that a saloon owner has treed a town and wants all the property on the route of the new railroad line and the town marshal tries to thwart the wicked plot, you might say, yeah, been there, done that. A hundred times. But if I said that the saloon owner and the marshal and even the three saloon owner’s heavies were all female, you might think that was a bit different. Yes, we are in a Z-movie version of Johnny Guitar. 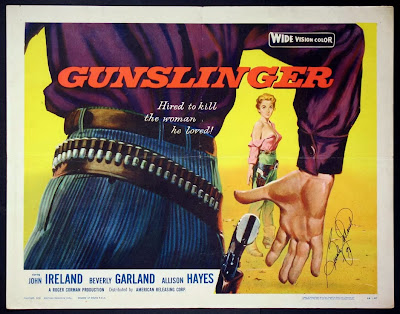 Good poster anyway
The actors will be familiar to devotees of cult and pulp movies, especially the saloon owner, Erica Page, because she is played by the 50 Foot Woman herself, Allison Hayes (who had also been in the earlier entertaining Scott Brady picture Mohawk). She has the Mercedes McCambridge part of evil rival to the heroine.
The heroine herself, Rose Hood, gets the mayor to pin the marshal’s badge on her comely bosom while her late husband, who had been wearing it, is being interred. In fact, during the funeral service she casually shoots to death one of the attenders at the graveside, who was one of the murderers, she claims. No one seems to mind a bit. 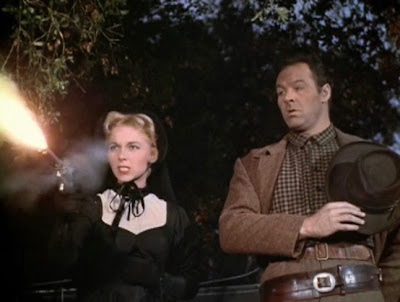 Black widow disposes of a mourner at the graveside
Madam Marshal Hood is played by Beverly Garland (three B-Westerns and an episode of The Lone Ranger). Unfortunately, it is a toss-up as to which of the women, the saloon owner or marshal, is the more unpleasant. They both deserve to get shot, though only one does. Erica has three dancing girls in her saloon who double as henchpersons and try (rather pathetically, actually) to hang the marshaless, but sadly fail.
The three heavy-ettes are thwarted by a gunslinger all in black who has been hired in Tombstone (where else?) to come in and shoot anyone standing in the way of Erica’s plans to clean up with the railroad scheme. And that includes Marshal Beverly. At least we recognize the gunslinger, for it is John Ireland. So that’s one good thing.

Starting off in 1946 as Billy Clanton in My Darling Clementine, Ireland was entertaining as Cherry Valance the gunslinger in Red River and then he shot Jesse James as Bob Ford in the amusing Samuel Fuller trash-movie I Shot Jesse James. Now you have to admit, that’s a pretty good start to a Western career. After several B-Westerns (including a part as Bitter Creek Newcomb in The Doolins of Oklahoma) he again slung a gun in Vengeance Valley, trying to kill Burt Lancaster. In 1951 he was seriously good with Lloyd Bridges in an underrated, gritty Lippert Western Little Big Horn. In 1953 he co-directed and starred in Hannah Lee, an independent movie about Tom Horn, or a Tom Horn-like figure anyway. Later, he was to return to Tombstone, not as a Clanton but as John Ringo in Gunfight at the OK Corral, and to do loads of TV Westerns and, sadly, many spaghetti ones too. But you see it’s a very interesting career. He seems to enjoy the part as the eponymous Gunslinger in ’56 and the picture is all the better for his being in it. 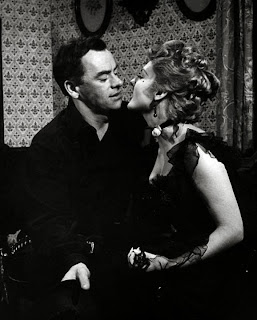 Ireland schmoozes both gals but gets neither
The movie has strangely Pink Pantherish cartoon opening titles. Sam Bass appears in it (for about twenty seconds): he crosses over from the highwayman’s trail to the path of righteousness by taking over as new marshal from Beverly. The Pony Express rider shot in the back by evil Erica has the proper slouch hat, with the brim pinned up to the crown in front. Great lid. 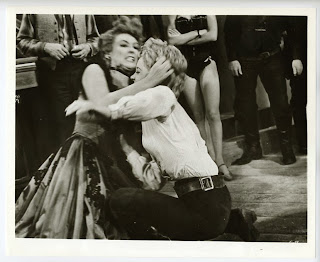 They don't get on
The dialogue is extremely stilted. The editing and continuity are appalling. It was quickly shot on a ranch somewhere near LA. You can see jeep tracks on the trail. The ‘steel’ jail bars shake when someone bumps into them. The final gunfight with Winchesters is (unintentionally) hilarious.

Marshal Beverly
And yet you get the sense that all this was intended, as if Corman was saying we all know this is a trash movie but we’ll get paid and what’s wrong with that?