This spaghetti western just staggers up to two revolvers as being only dire, not abysmal.


It was released by United Artists in ’68, starred Lee Van Cleef, and the music was by Ennio Morricone (a score admired by Tarantino and used in Kill Bill, apparently), so the movie had the credentials. Unfortunately, it is too long and too slow and ridden with clichés. The writing is rotten. 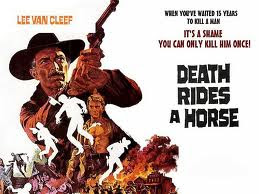 Fifth movie and only Western of director Giulio Petroni (he only made a fistful of films), this one is reasonably well done as spaghettis go. There is some attempt at photography (Carlo Carlini) and Petroni does try to achieve tension. Lee adds weight to the acting in a sort of sub-Colonel Mortimer role and Californian John Phillip Law, decked out like Clint, does his best to look steely and be quick on the draw.

Clint lookalike (-ish)
Lee and Law are both after revenge against the same gang, Lee because he was a member of it and they double-crossed him so that he got 15 years’ hard labor, and Law because the same gang killed his whole family after raping his mother and sister. The gang isn’t the kind you would invite to tea. Lee ‘n’ Law are rivals, as they both want to kill the desperadoes and do not care to see the other get there first.


Luigi Pistilli (Father Ramirez the year before in The Good, the Bad and the Ugly) is the principal baddy, the rich banker Walcott who robs his own bank (a very well-known trope) and is generally without scruples. He reprised the same role shortly after in The Great Silence/Il Grande Silenzio, directed by Sergio Corbucci. Brit character actor Anthony Dawson, bit-parter in many a James Bond flick, plays a very plummy-voiced secondary baddy and gang member. 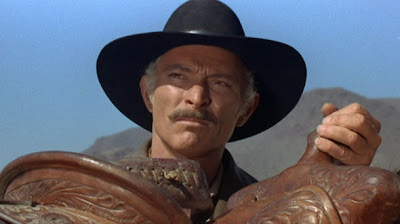 Signor Van Cleef
Lee van Cleef did a dozen or more spaghetti westerns at the end of his career. In fact, after Eastwood he's probably the most famous American to star in them. They were all pretty dire but this one was probably his best.
To be perfectly honest, you do not need to see this film. No one will think you an inexpert Western fan if you skip it. Nor will you have foregone a great work of dramatic art.


But it isn’t total dross and if you had nothing better to do on a wet afternoon, well, better to watch this film than waste time sitting through a non-Western, some boring Shakespeare play or something. I’ve probably been over-generous in awarding it two guns but I just felt I needed to distinguish it from the utter crap that was churned out industrially in the late sixties with no respect for the genre, just as exploitation. Signor Petroni at least made an effort.