Because this is set in the Rockies in about the 1870s and has US Cavalry and Indians and outlaws and so on, we must class it as a Western but in reality it’s a whodunit. Alistair MacLean wrote a great number of action thrillers in the 1960s and some were made into popular films such as The Guns of Navarone, Ice Station Zebra and so on. They all had incredible plot twists and a ‘British’ feel to them, even if set in exotic locations. This one is a kind of Where Cowboys Dare. 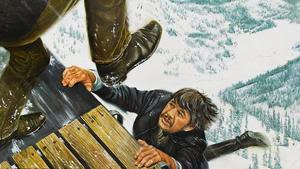 Will the hero be killed? No.
It’s all set on a train and soon enough we have the inevitable “We have a killer aboard.”  Someone is whacking passengers one by one and no one is who he (or she) seems. Church ministers, doctors, train engineers - all meet their grisly ends but of course they aren’t really church ministers. It’s Mr. MacLean’s tribute to Agatha Christie, perhaps: Murder on the Occidental Express.


Charles Bronson is brave, omnipotent and laconic. As it’s a train drama he has his fair share of deadly fights on the roof. The 2nd Unit director was Yakima Canutt (his last movie) so the stunts are good. A bald baddy with a beard has taken over the fort and is planning to give the Indians the train’s cargo of guns and ammunition. Fortunately for the action finale, the train’s also carrying lots of dynamite and Bronson is, naturally, expert in its use. 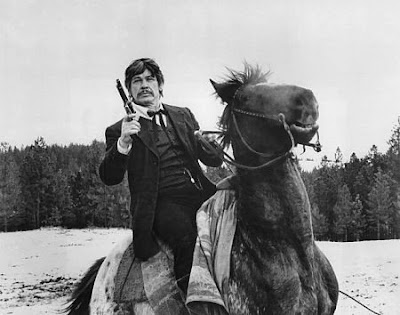 Secret agent Bronson
There’s some nice Lucien Ballard photography of Idaho scenery (this and another Mr. & Mrs. Bronson film the following year, From Noon Till Three, were his last Westerns) and the train is good. It chugs over high trestles (or one high trestle several times anyway). The movie was directed by Tom Gries, who did the excellent Will Penny and the fun 100 Rifles. This was his last Western. 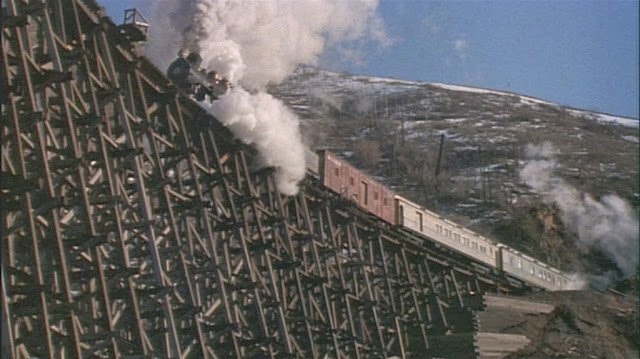 Nice trestle
The acting is fairly perfunctory. Bronson as a secret agent was no Laurence Olivier and Jill Ireland, Mrs. Bronson, is really wooden – sorry. There are some solid character actors (Charles Durning, Bill McKinney, David Huddleston; Richard Crenna is the Governor of Utah). But it’s not the actors’ fault. Even the great Ben Johnson can’t rise above a frankly dire screenplay. Mr. MacLean really should have stuck to paperback adventures and given Western movies a miss. 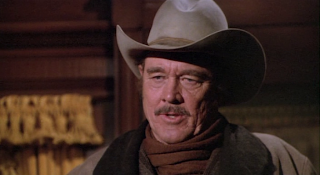 Ben the Great. But even he can't save it.
On a superficial level this is a decent actioner. There are plenty of shoot ‘em ups and bodies falling from the train. But the characters are two-dimensional and there is no development. There’s no real suspense. You just get the idea that it’s a formula and we, the viewers, are going through the motions just as the actors are.
Second rate - though it did well at the box-office.