Universal was a great studio for Westerns and 1953 was one of the classic years for the genre. There were truly great ones like Shane (Paramount), The Naked Spur (MGM) or Hondo (Warner Bros); there were very good ones such as Escape from Fort Bravo (MGM) or The Man from the Alamo (Universal); and there were perfectly satisfactory ones like Kansas Pacific (AA) or Wings of the Hawk (Universal).


But there were 91 in all that year (a dream year for Western lovers) and many were inevitably below par.


Jeff Chandler’s two offerings in that year were sadly among the also-rans. A pity, because he was good at Westerns. He did 14 before his premature death and in them he seemed to alternate between being Cochise or an Army officer, in both cases decent and statesmanlike and in both cases burly and tall. But earlier in ’53 he had done the very ho-hum The Great Sioux Uprising, and then he did War Arrow, which has many aspects in common. 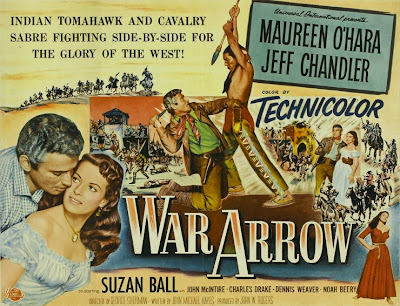 Not one of the great landmarks of the genre, I fear
In both Jeff is being statesmanlike with the Indians, respecting them and trying to bring peace between them and the white man. In both he succeeds, as we know he will. And in both he gets the girl, ditto. Both films are attractively photographed in beautiful Western locations.


But there are differences. War Arrow is definitely a better picture than The Great Sioux Uprising, mainly because the writing and direction are superior. Instead of the elderly Lloyd Bacon, who did a poor job directing the first, on War Arrow there was experienced Western hand George Sherman. He’d been directing bulk-production talkie programmers since the mid-1930s but had done some really quite good movies like Tomahawk with Van Heflin or The Battle at Apache Pass with Jeff Chandler again. He knew what he was about and War Arrow, while fairly predictable and standard, moves right along in pace and plot. Instead of the stodgy Robert Bren and Gladys Atwater script of Uprising, there was John Michael Hayes (later, Nevada Smith) to write the later movie. He again does a professional job.


As for the acting, the earlier film did feature Glenn Strange, which was good, but the cast of supporting character actors is stronger in the later one. We have Noah Beery Jr. and Charles Drake as Jeff’s sergeant sidekicks, both very good (Beery was never less than excellent), we have Jay Silverheels as the Kiowa chief Satanta and Henry Brandon (later Scar in The Searchers) as the Seminole Maygro, and above all we have the formidable John McIntire as the by-the-book, jealous Colonel Meade. That’s a damn good line-up.

McIntire as by-the-book colonel excellent. Chandler as decent major too. Female leads O'Hara and Ball ho-hum.
The female leads are weak in both, the Howard Hughes protégée Faith Domergue in the first and the prima donna-ish and overacting Maureen O’Hara in the second. Both do look beautiful, though. The ingénue in War Arrow is Suzan Ball, one of Lucille’s cousins. In this movie and the later Chief Crazy Horse she played an Indian maid. Unconvincingly.


The story of both movies is historical bunkum. In War Arrow, we are fighting the Kiowa. Jeff recruits a small band of displaced Seminole Indians led by Maygro (Brandon) to aid him in his guerrilla tactics against the fearsome Kiowa chief Satanta (Silverheels) and his men. Colonel Meade (McIntire), who is no relation to the Gettysburg Meade, I’m sure, is playing it too much by the book and is being totally outclassed by Satanta’s clever tactics. Jeff has orders to train up a band and fight fire with the fire. Col. Meade does not approve, also because he has set his sights on Maureen O’Hara and Jeff looks as though he is beating him to it.


There’s a renegade white captain who is fighting with Satanta (with the slightly patronizing suggestion that no wonder the Indians are doing well) so he has to be foiled as well. You have to have skullduggery. There’s an attack on one of those wooden toy forts Hollywood also had. Satanta is killed in the attack. I’m afraid none of this conforms to history. 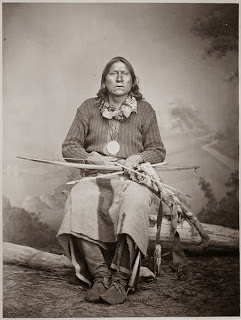 Satanta or Set'tainte, also known as White Bear (c 1820 – 1878) was born the son of Chief Red Tipi and a Mexican captive. He developed a reputation as an outstanding warrior and in his twenties was made a sub-chief of his tribe, under Dohäsan, with whom he fought at the first battle of Adobe Walls in 1864. He signed a series of treaties, notably the Medicine Lodge Treaty of 1867, but neither side respected the provisions. In 1871 Satanta led several attacks on wagon trains in Texas. He was arrested by General Sherman and, with fellow chief Satank, put on trial for murder, the first chiefs to be so tried. He was found guilty and sentenced to death, commuted to life in Huntsville State Penitentiary. But he was released on parole after two years. Satanta was present at the fight with buffalo hunters at Adobe Walls (where young Bat Masterson made his name), which violated his parole, and he was returned to Huntsville. There he committed suicide in 1878 by throwing himself from an upper window. Larry McMurtry’s Blue Duck was in some ways based on Satanta. 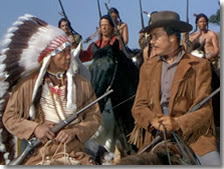 The movie Satanta (Jay Silverheels)
An interesting story, though none of this comes across from Jay Silverheels’s Satanta in War Arrow. Oh well.


The Great Sioux Uprising and War Arrow can be safely passed over by Western fans in favor of many better offerings of the same year. If they do come on TV, however, they aren’t dreadful and both, especially the latter, have certain qualities.