At first blush a B-picture with stars of the second rank, this movie is actually creeps up on you. It turns out to be rather good.


John Ford and John Wayne made such great Westerns together that when you see Ford and Wayne on the title screens you think what’s this, a lost masterpiece? But it turns out to be Patrick Ford, the son, and Pat Wayne, ditto. 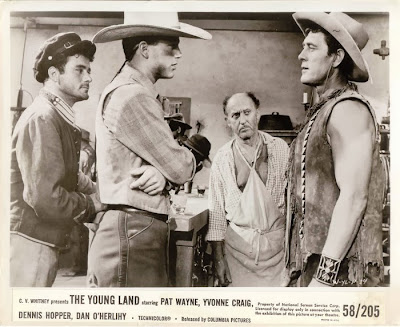 Sheriff Pat Wayne confronts lead heavy Ken Curtis
Patrick Wayne (b 1939) was John’s second son and made his debut in Rio Grande in 1950 as ‘Boy, uncredited’, aged 11. Six years later he was excellent as the fresh-faced lieutenant in The Searchers, and three years after that The Young Land was his first starring role. He is tall, has something of his father’s walk and is altogether convincing as the young sheriff of a newly-American California town, which he governs, despite the rowdy presence of many toughs, without a pistol strapped to his hip. In the story, he is declared to be certainly over 21, though in reality he was not yet 20. His acting is a tad on the wooden side but only a tad; mostly, he carries it off with dash and vigor.


Leader of the toughs but also with a good side to him is Ford regular Ken Curtis, this time with no songs or hokey humor, just playing the part, and playing it rather well. 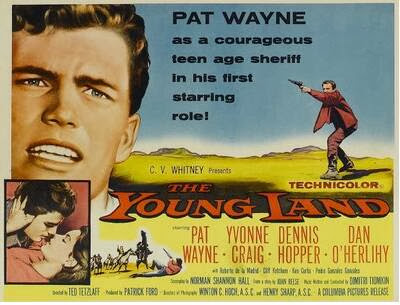 His first starring role and his last for some time. He was Sinbad in 1977.
They had cinematographer Ted Tetzlaff to direct it, only his second oater as director. Perhaps as a result, it’s quite a visual Western: though set in a small town with no stagecoaches or cattle drives or anything, so it could have been a very static play on studio sound sets, Tetzlaff manages a lot of sweeping vistas and Californian color. And the action nips right along too so he did a good directorial job really.


It was written by vet Westernist Norman S Hall, who’d been writing B-Westerns since the mid-1930s, from a story by John Reese who did Good Day for a Hanging, a Fred MacMurray Western, the same year. The script is rather interesting because it details sympathetically and thoughtfully with the theme of racism. The sniveling low-life gunman (Dennis Hopper, 23), who is arrested by Sheriff Pat for shooting a man to death, is surprised to be detained: “For shootin’ a Mexican?” The trial of the gunman excites universal prejudice and is attended by angry, armed men from both sides of the perceived ethnic divide. There’s a dignified and statesmanlike don, former alcade, Don Roberto de la Madrid, played by Roberto de la Madrid. He has, obviously, a beautiful, sultry daughter, Elena (Yvonne Craig), slightly less statesmanlike but rather more attractive, and she and Sheriff Pat develop a mutual affection. The de la Madrids are on the side of reason and moderation and together with the politically shrewd judge manage to defuse (for the moment) the US-American and Mexican-American animosity. 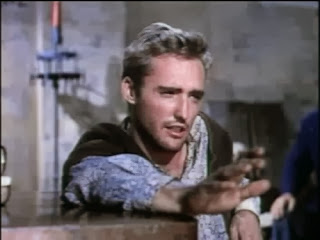 Hopper as low-life gunman
The juiciest role is that of said judge, which went to Dan O’Herlihy. He’d started with a small part in the 1950 epic The Iroquois Trail with George Montgomery and this was his second Western and first with a key part. I remember him later as the English gent Sir Harry Ivers in the ho-hum Alan Ladd Western One Foot in Hell and as Grimes in 100 Rifles. He also did a fair number of TV Westerns. He was rather good. Here, his judge is pompous and stands much on his own dignity but he also comes across as decent, honorable and full of integrity. It’s well done, even if his final verdict does seem improbable. 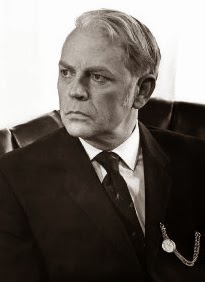 Judge O'Herlihy, rather good
This is a much better Western than it may appear at first sight and I recommend it.