The kind of Western you want to see

An absolutely classic, straight-down-the-line 1950s Western, The Tall Stranger has a first class Joel McCrea as the lead (he was never less than excellent) and some top-notch character actors in other parts, notably Leo Gordon, Ray Teal and Michael Pate. Virginia Mayo is a blonde ex-saloon gal trying to make a new life with a young son. It’s a Louis L’Amour story (as was McCrea's Stranger on Horseback two years before). There’s rootin’, tootin’ ‘n’ shootin’. What’s not to like? 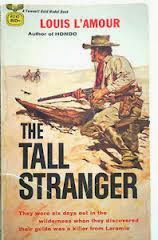 Louis L'Amour tale, well adapted by Christopher Knopf
Joel McCrea did a lot of dramas and rom-coms to start with but he always wanted to do Westerns. He knew Will Rogers very well and he loved all the roping and ranching. In 1935 he got a good part in the Howard Hawks-directed semi-Western Barbary Coast and then it was Westerns all the way. Over a 43-year period he ended up appearing in 34 plus the 26 episodes of Wichita Town on TV. He starred in the big Manifest Destiny pictures Wells Fargo (1937) and Union Pacific (1939). In different movies he played some of the greatest figures of the West: Buffalo Bill (1944), The Virginian (1946), Wyatt Earp (1955) and Bat Masterson (1959), and did some outstanding smaller Westerns like Ramrod and Four Faces West – among the best B-Westerns ever made. And towards the end of his career he starred in an absolutely superb movie, Sam Peckinpah’s Ride the High Country with RandolphScott. It truly was a great Western record. And always he was the quiet man, decent but a tough hombre when he had to be and just right in the saddle. 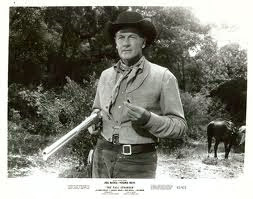 Joel McCrea
This was another Walter Mirisch production. McCrea had already done hree Westerns with Mirisch, Wichita, The First Texan and The Oklahoman, and now he signed again, to do another three.

Mirisch and McCrea worked a lot together

In The Tall Stranger Joel rides in after the Civil War (quite a few of his Westerns were just after the war, though this time he's a Union soldier, not a Confederate) to face the ire of his half-brother, rancher Hardy Bishop (Barry Kelly) who owns, or claims to own, all the huge Bishop’s Valley. The last thing he wants is sodbusters homesteading on ‘his’ cattle range. Yup, it’s one of those plots. But Joel is shot by a vicious Mexican rustler who has fancy spurs and a gold-plated rifle loaded with dum-dum bullets, and it’s the incoming homesteaders who save him – a beautiful blonde one in particular...


Now you gotta admit, that’s a classic start to what’s shaping up to be humdinger. 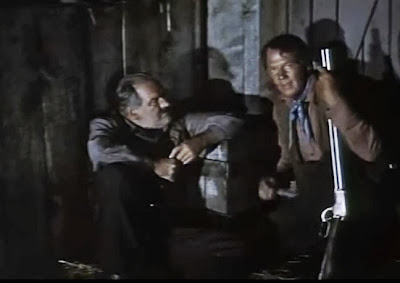 Holed up in the barn under siege. But they have that Henry.
Thomas Carr’s Western career started as an actor - well, an extra, anyway - as ‘Railroad worker, uncredited’ on John Ford’s The Iron Horse in 1924 but in 1945 he directed his first oater, Oregon Trail. He went on to direct B-Westerns all through the 1940s and 50s, and then a whole host of episodes of all sorts of TV Western shows, Bonanza, Laramie, Rawhide, The Virginian and so on. So he knew something about Westerns. He did a pro job on The Tall Stranger: the movie rattles right along, never lags and is in happily familiar territory without being hackneyed or corny. Well done, Mr. Carr.


Leader of the homesteaders is the great Ray Teal, in CSA cavalry hat. What a great character actor Ray Teal was. I must say, I slightly prefer him as a corrupt sheriff or the evil grasping big rancher (he could have had Barry Kelley's part), but he could do decent homesteader too.


Barry Kelley didn’t do that many Western movies (though later quite a few TV shows). I remember him as the sheriff in the Ronald Reagan remake of Law and Order and he was Lew Agry in Buchanan Rides Alone, so he was quite memorable when he did appear. He does a good job with the tough rancher part in The Tall Stranger, Joel’s half-brother. 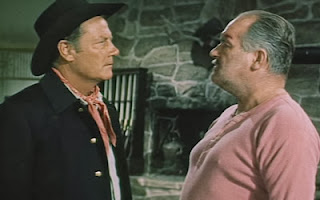 Half-brothers Joel and Barry
His ranch foreman is another stalwart of Westerns, Leo Gordon, and he is all decked out in gunslinger black and slick holster, odd for a ranch hand. But surprisingly he turns out to be a goody. He looks a bit puzzled being nice. Not quite sure what to do. Goody wasn't Leo's thing.

One of the hands is Michael Pate, playing Indian Charley, a kind man who nurses Virginia’s injured son. Aussie Pate came to Hollywood and made a name for himself writing Westerns (he wrote the excellent Escape from Fort Bravo for William Holden), as well as acting in them, often as an Indian. He was of course Victorio in the great Hondo in 1953. He was also very good. Actually, Leo Gordon wrote the occasional Western too. Leo and Michael, great stuff.

Michael
Syrian-American Michael Ansara, who sadly died in July this year, was often wheeled on for ‘ethnic’ parts and in Westerns he was usually an Indian (such as Kamiakin in Pillars of the Sky) or a Mexican. Here he is the evil Mex rustler Zarata, the one with the fancy rifle and soft-nosed bullets. Boy, is he bad.


Virginia Mayo had starred with McCrea in the Raoul Walsh-directed Colorado Territory in 1949 – her first Western. She obviously got away from him but he gets her back in this one, never fear. 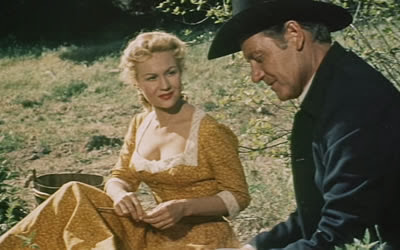 Joel gets Virginia. Again.
For 1957 (and for McCrea) it's quite 'modern'. There are damns and hells and references to houses of prostitution. Of course that would soon be mild stuff indeed but it was a sign that McCrea Westerns were becoming a little more 'adult'.

Anyway, there’s nothing wrong with The Tall Stranger. If you want a quality B-Western to really enjoy, you won’t do better. It’s the kind of oater you want to see. Trust me.