Just about passable as Eurowesterns go, this fairly early example (original title Tierra brutal) was directed by Londoner Michael Carreras, grandson of the founder of the Hammer studios and himself top dog there at the time. He was taking a break from lurid horror films to go off to Spain to make a Western.


He got some American stars who were not exactly in the first rank (I'm being polite here) to appear in it. Richard Basehart had done a couple of B-Westerns and some TV shows (he was born in Zanesville, Ohio, birthplace of Zane Grey, so we honor him; Dennis Hopper was born in Dodge, and Stuart Gilmore, director of the Joel McCrea remake of The Virginian, was born in Tombstone - forget about being born with a silver spoon in your mouth, that's like being born with a silver Colt in your holster). Baseheart plays Steve Fallon, an embittered gunfighter in black leather who wants to hang up his irons and settle down in Sonora. 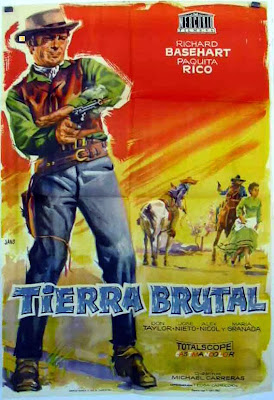 I prefer the Spanish poster
Don Taylor is Summers, an American rancher in Mexico who has been so scarred by his experience in the Civil War that he won’t touch a gun again. Taylor had acted in one B-Western (the Luke Short story Ambush, 1950) but moved into directing TV shows. His face is kinda familiar. He looks a bit like David Janssen, I think that’s what it is. He has a beautiful Mexican wife (Manolita Barroso) and, natch, a glam daughter (Paquita Rico) for the gunfighter to fall for. 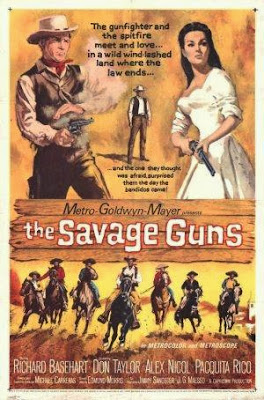 There are seven bad-guy riders, you notice
There is the obligatory evil, grasping rancher who wants the whole valley. Well, there had to be. He is Ortega (José Nieto, quite good in a dastardly way) and the noble Don he has dispossessed? They wheeled Fernando Rey out for that part. Sadly, the film is quite crudely dubbed so a lot of the acting is marred. Ortega has a lightning-fast American gunman as a henchman, Danny, and this part is played by Alex Nicol, the no-good Dave Waggoman in The Man from Laramie. The question is, of course, who is faster, Danny or the famed Fallon? Such suspense.

Alex Nicol, gunslinger
Far better than the later spaghettis that were to be made in Spain, this one is more on a par with A Man called Noon or Catlow. No great shakes but you’ve seen worse.