Jeff Chandler’s last Western (he died in 1961 from blood poisoning got in a slipped disc operation, at the age of only 42) was a minor studio black & white B-movie, and some might think that was sad. But actually, it was rather a good film.


Allied Artists produced a plethora of low-budget B-movies. Probably the studio’s greatest triumph was the Don Siegel-directed Invasion of the Body Snatchers in 1956. 1960 was a good year for Allied, with such epics as Sex Kittens Go To College, Bluebeard's Ten Honeymoons and David and Goliath.


Still, every now and then they came up with a nice little black & white psychowestern and The Plunderers was one. 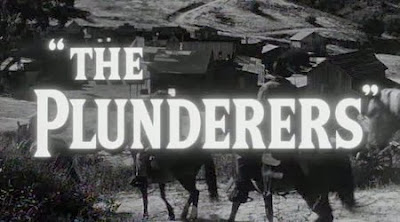 Better than the average Allied picture
It starred Jeff with second-billed John Saxon. Doubtless the two Brooklyn boys thought that together they would give strength to the film. Eendraght Maeckt Maght, after all. Saxon (b 1935) had been good as the half-breed Johnny Portugal in The Unforgiven earlier the same year, and this time did a Mexican, paying great attention to the accent. He was to be Mexican again as Chuy with Marlon Brando in The Appaloosa in 1966 and yet again, with Clint Eastwood, as Luis Chama in Joe Kidd in 1972. He was rather good. He rode superbly in The Unforgiven, I noticed, and I guess he didn’t learn that in Brooklyn. 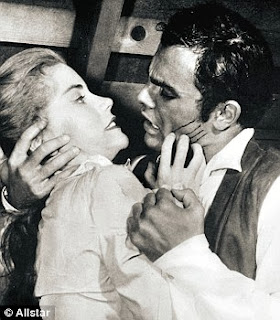 Bad guy Saxon gets scratched
Prematurely gray Jeff was always good in Westerns. He was noted for his Indians, of course. He was Cochise no fewer than three times (Broken Arrow, The Battle of Apache Pass, Taza, Son of Cochise) but he was just as often seen in US Army blues. In The Plunderers he is ex-Captain Christy, Civil War vet with only one working arm. 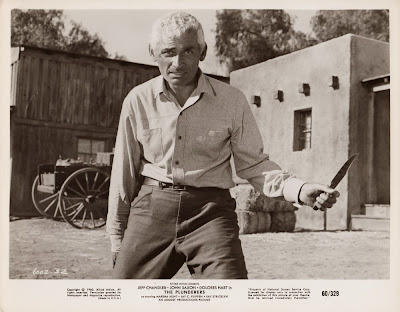 One-amed vet takes on the bully
The story is a rather Firecreeky plot about bandits coming to town, holding the place hostage and revealing all sorts of weaknesses and enmities among the population. The bad guys are really only four loutish youths, though, not professional bandits at all. More like The Wild One. They are led by Ray Stricklyn (the boy Clint in The Last Wagon and the Young Jesse James immediately before The Plunderers) who is outwardly macho but inwardly insecure. He has with him a huge bully whom they call Mule (Roger Torrey in his first Western; he did a lot of TV work afterwards) and a callow youth named Davy, played by Dee Pollock, only 23 but already a veteran of many a B and TV Western. But, as Jeff says, the dangerous one is the Mexican. The Mexican, Rondo (Saxon) repays the compliment by telling his compadres that Capt. Christy is the one to watch. 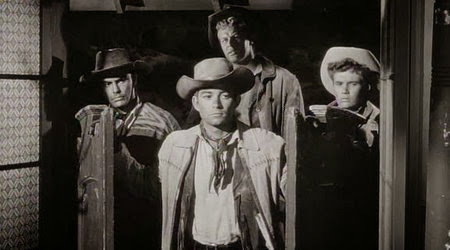 The four punks
There are some old-faithful character actors. Vaughn Taylor, always there when you need a pusillanimous townsman, is the general store owner and James Westerfield is the saloon keeper. You know Vaughn: the hotel manager in Cowboy, Henry Richardson in Warlock, the banker in The Professionals. You’ll recognize Westerfield immediately, too: Judge Parker in True Grit, Reverend Howard in The Gunfight at Dodge City, etc. Great to see these faces. And good old Jay C Flippen is the elderly sheriff who’s not as fast as he was. It’s a pretty nifty supporting cast. 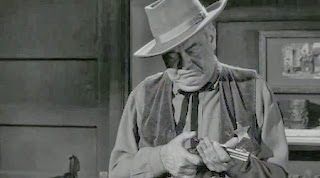 Jay C Flippen is the elderly sheriff
It was directed by Joseph Pevney, only his third Western. He had directed Chandler five years before in Foxfire. He does a sound job.


There was a 1948 The Plunderers, a Republic effort, but that was no relation and this one is not a remake.


You could actually do a lot worse, though, than this 1960 movie.