Monte Cristo on the Mississippi

When in the Westerns rack of the DVD store you see a film titled Gambler from Natchez starring Dale Robertson, you think you’re in for a Western. Sadly, you will be disappointed in that hope, but don’t despair: you are in for a merry 88 minutes of malarkey.


It’s a costumed murder mystery and revenge drama set in 1840s New Orleans, and the title frame says it all really: a deck of cards, a brace of flintlock pistols and crossed swords. Elegant period gowns and stuffed shirts, carriages and mansions decorate a Monte Cristo-ish world of plots, schemes and skullduggery. 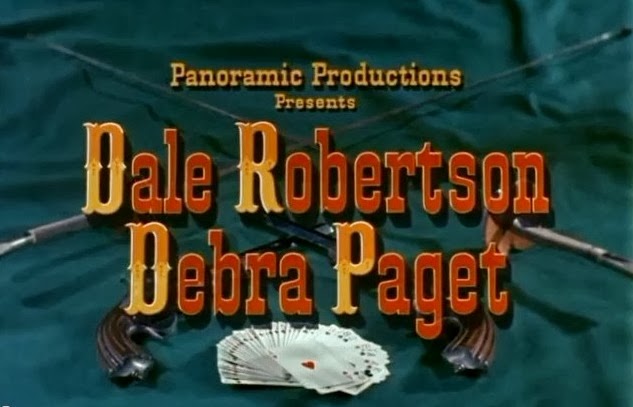 A bit like The Iron Mistress, it's not really a Western. Never mind.
In fact there is something of Edmond Dantès about Dale because he arrives from nowhere in glitzy New Orleans with loads of money and sets about getting revenge - not, though for his own incarceration but for the murder of his pappy who was, horrors, a professional gambler (though an honest one).


Pre-Wells Fargo Robertson is rather good in this (once you get past his 50s Brylcreemed hair) for he looks the part in the clothes and handles the bladework himself with, well, no other word for it, aplomb. It was already his eleventh Western (if Western it be) and it was followed immediately after, the same year, by his heroic captain in Sitting Bull. 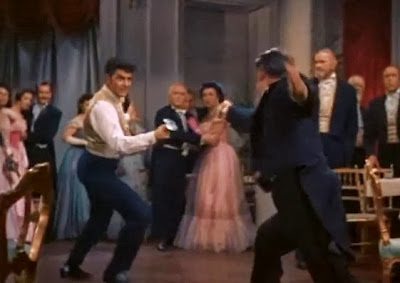 En garde !
The villain André Rivage (Kevin McCarthy, in his first Western; he was third billed in the Jacques Tourneur-directed Stranger on Horseback the following year) is suitably slimy, base, lying and ruthless by turns. He has both degenerate rich and thuggish poor cronies, and, naturally, a beautiful sister Ivette (Lisa Daniels) with whom Dale can dally – though of course we all know he’ll go for the riverboat captain’s Creole daughter Melanie (Debra Paget, gorgeous, her first appearance after Broken Arrow) at the end. 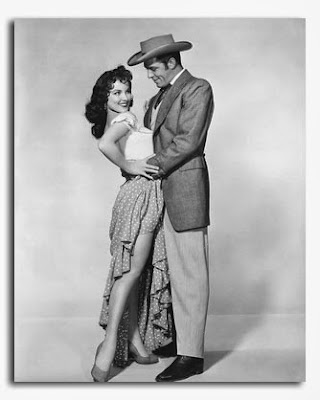 Gambler will get dusky (and rather saucy) beauty
I do think Dale should have ruined the villains, the rich ones I mean, rather than cause their deaths. That revenge would have been sweeter. But nay, bodies litter the Vieux Carré.


All the flunkies are African-American and the male ones are called Boy, even by Dale, which is unpleasant but then this was 1840s New Orleans (and 1950s Hollywood). Woody Strode is in it though, as the riverboat’s factotum, and he gets to watch Dale’s back satisfactorily.


Directed in workmanlike fashion by Henry Levin (The Man from Colorado) and shot in nice Technicolor by Lloyd Ahern (The Silver Whip, another Dale Roberstson oater) with stirring music by Lionel Newman, this movie has quite a lot going for it. And boy, that riverboat captain is fat. 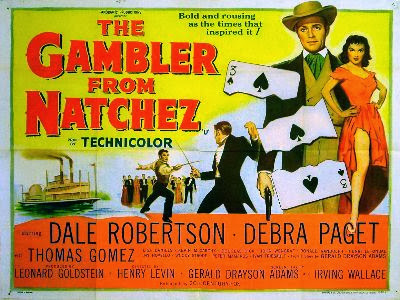