The Command was the first Western - the first Warner Brothers movie, in fact - in CinemaScope and indeed, the Wilfred M Cline photography (California standing in for Wyoming) does make the most of long, snaking wagon trains and zigzagging columns of soldiers. They threw budget at it. 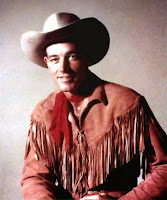 The star was a bit on the B side, though. Guy Madison (1922 – 96) was popular because of the successful TV show Wild Bill Hickok, which ran from 1951 to 58 for no fewer than 113 episodes. During the 1950s, some episodes were cobbled together and released as feature films. Madison and his comic sidekick Andy Devine also did the show on radio for several years (you can hear the first episode here and it’s fab). Madison was very handsome and very popular, especially with women viewers. The popularity got him roles in eight Westerns in the 1950s, including The Command, but once the Wild Bill series was over he struggled to get work and ended up doing low-grade Italian westerns in the 60s.


As the title suggests, The Command was an Army Western. The story tells of a cavalry doctor, Robert MacClaw (Madison), obliged to assume command in the field when his commanding officer is killed by Indians. It’s a post-Custer scenario with Cheyenne, Sioux and Arapaho out in big numbers. (There is quite a number of Westerns with this post-Custer scenario). The basic conflict of a doctor leading men to kill Indians is potentially an interesting one. He defends himself thus: "I've got a uniform and a conscience. Right now, the uniform covers the conscience." Neatly put. Sadly, though, this potentially interesting aspect is left unexplored by the weak script. 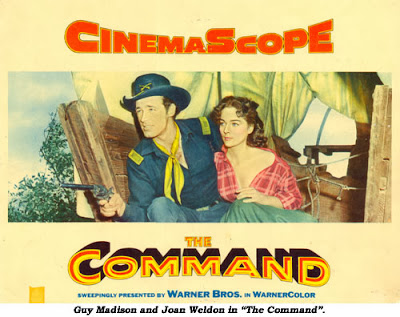 The screenplay was written by Russell Hughes, only his third Western (though he later did the very good Jubal), and writer/director of many a trash B-movie, Samuel Fuller. Fuller is a great figure among auteuristes and cinéastes but I never saw the quality there, I’m afraid. I Shot Jesse James, Run of the Arrow and Forty Guns are essentially pulp fiction movies which leave a slightly unpleasant taste in the mouth. Fuller was better suited to black & white B tough-guy war films and noirs and I don’t think he ever really understood the Western.

The story of The Command had huge, but untapped potential because it was based on a novel, Rear Guard, 1950 (first published as The White Invader in The Saturday Evening Post) by James Warner Bellah (left). Bellah wrote 19 novels and very many short stories, especially for the Post, and several of them were taken up and made into movies – notably by John Ford. All three of the cavalry trilogy, Fort Apache (1948), She Wore a Yellow Ribbon (1949) and Rio Grande (1950), were based on Bellah stories: Massacre, Big Hunt and Mission With No Record, respectively. He also wrote the screenplay, then novelizations of Sergeant Rutledge, The Man Who Shot Liberty Valance (both John Ford films) and A Thunder of Drums.
With the CinemaScope and a first class cinematographer, with budget, and with such a story as a base, the movie The Command ought to have been better. That it was ordinary is down to the screenplay, the less than stellar (though solid) acting and the direction by David Butler, who was excellent directing Bob Hope comedies but didn’t really do Westerns. He directed seven (and some TV shows), San Antonio with Errol Flynn being about the best (though Raoul Walsh, uncredited, directed much of that), and the Doris Day Calamity Jane, if that’s your thing. Of The Command, Butler himself said, “That picture was made as a filler, and it grossed more money than any other picture that year at Warner Bros.” So he got something right – and indeed, the action scenes are fine and the movie perfectly satisfactory as a B-Western. But it could have been more. Imagine it with John Ford directing and, say, William Holden as the Army doctor – as he was, later, for Ford in The Horse Soldiers. 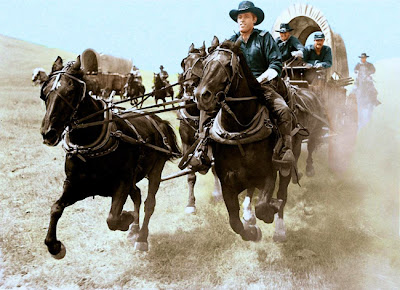 Some good action scenes, especially towards the end
Though made in ’53 and shown in ’54, The Command had none of that Broken Arrow semi-pro-Indian slant that so many Westerns, even Bs, were given. It harks back to the 40s. The Indians are savage non-persons who may be shot down in large numbers without compunction – indeed, to cheers. Madison says they possess “a child’s logic” and avers that they are “lacking civilization”. That was, in fact, something of a Bellah trait.


Ray Teal is good in it (he always was) as the arrogant and roughneck Army surgeon and Carl Benton Reid was also formidable as the hard-baked colonel. But probably the best actor was James Whitmore as the experienced, dust-covered cavalry sergeant lumbered with the doc who knows nothing of tactics but who finally acquits himself well. The relationship he and Madison build is well done. They say Denver Pyle was in it as an infantryman but I didn’t spot him. Curses.