Randolph Scott was in five films in 1939. There was a coast guard movie, one about pilots, and three Westerns. The first oater was his part in the brash, fun Jesse James with Tyrone Power and Henry Fonda, and the third was Frontier Marshal, when he was the first to play Wyatt Earp on screen.


Sadly, however, the middle one was little more than a Shirley Temple vehicle and, to make matters worse, was set in Canada.


I don’t think that stories of how the Mounties got their men were really Westerns, not proper ones, and Randy looks ridiculous in his ‘British’ mustache and red uniform with silly bell hop's cap. And I didn’t know Her Majesty’s officers rode mustangs with Texas saddles or spoke with Virginia accents. A couple of his brother officers were actually English anyway, so at least central casting got that right. 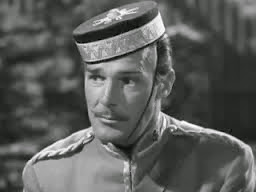 Not Randy's finest hour
Now I don’t want you to think me a curmudgeon (though you probably will) but I don’t really like children in Westerns. I know there were families with offspring on the frontier and so I guess they have to be shown but so often in Westerns they were Hollywood brats. I didn’t even like the whiny child in Shane. Most people think he was adorable but I think he wasn't a patch on the tough kid in the book. About the best boy was Lee Aaker, the Rin Tin Tin lad, who was first class in Hondo. Some of them could act remarkably well – think of that little girl in Shoot Out with Gregory Peck – but paraphrasing Dr. Johnson, "Sir, a child's acting is like a dog's walking on his hind legs. It is not done well; but you are surprised to find it done at all."


In Susannah, Shirley is indeed in the ‘acting remarkably well category’; she was very talented. Because Westerns weren’t really in those days a girl thing, they also had a little boy in it for Shirley to pal up with, the son of the chief, called Little Chief (played by Martin Good Rider, a Blackfoot), so this is really a children’s movie. And for their mothers. I hope their poor dads didn’t have to go. Maybe they sneaked out at the interval and went for a beer. 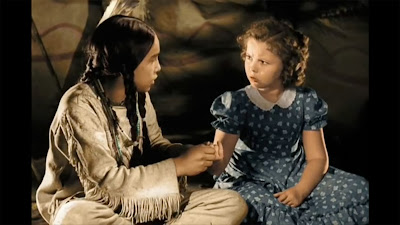 Shirley with her little Blackfoot pal
The Indians (it’s an Indians-against-the railroad plot) are even more “Ug, me big chief” than was usual for this time and the script is very weak despite (or because of) the fact that no fewer than nine writers contributed to the screenplay from a Muriel Denison novel. There were even two directors. The Indians also wear their feathered war bonnets and paint all the time, rather like you and me wearing our tuxedos or long dresses to wash the car. 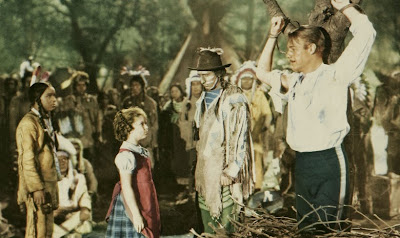 Shirley saves the day
Margaret Lockwood appears for Randy to fall for. She's the colonel's daughter, natch, though colonels are called superintendents in the RCMP. Good old J Farrell MacDonald is there as Inspector Randy’s Irish servant who cares for the little girl. Victor Jory is the bad Indian Wolf Pelt (there always has to be a bad Indian who wants war). When he joins the real Blackfoot extras in a war dance he is embarrassingly bad. Still, I am a Jory fan so I forgive. 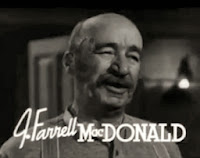 This film is not actually unwatchable (the only truly unwatchable Randolph Scott Western is Belle of the Yukon). But it isn’t very good either. Strictly for Shirley Temple fans only. 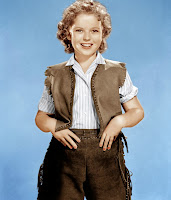