Santa Fe Passage is a very routine Republic B-Western with little to recommend it. It’s in color and set in nice Utah locations but really that’s about all I can say in its favor.


It’s a wagon train/Kiowa story with John Payne as buckskin-clad scout and Slim Pickens as his sidekick – but even Slim can’t do much with the writing and directing, such as it is.


John Payne was a 50s beefcake actor. I think his contract had a clause in it saying that he had to remove his shirt at least once each movie. He was in 12 Westerns, 1939 – 1956, and then a few TV shows. Probably his best films were Rails into Laramie and Silver Lode, both in 1954. He was not the most charismatic of Western actors but he was solid. 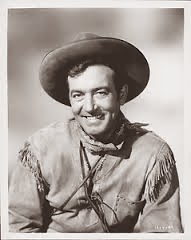 John Payne
His co-star was Faith Domergue (which she always insisted be pronounced Demure, for some odd reason). Howard Hughes had met her at a party on his yacht and become infatuated with her, bought her out from Warners and put her in some of his movies, which flopped, partly because she couldn’t act very well. She later became known for cheap sci-fi and horror flicks but she did five B-Westerns, starting with Duel at Silver Creek with Audie Murphy, The Great Sioux Uprising with Jeff Chandler and then this one. Sorry to say it, but she wasn’t much good. 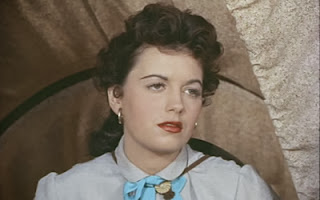 Faith Domergue
Then the bad guy is Rod Cameron. Oh dear, I am finding it difficult to be complimentary. I'm not a meanie, honest, but what can you say? Canadian Cameron made B-Westerns all through the 1940s and 50s, many opposite Yvonne de Carlo, stuff like Salome Where She Danced and Frontier Gal, pretty dire most of it. Later he did TV work and some Eurowesterns. He was OK, I guess. At least he was tall and tough.

Rod Cameron
We have got heavy Anthony Caruso, always fun, as the Mexican villain Chavez and Leo Gordon the Great as the half-breed villain McLawery, so that’s good anyway. And as I say, Slim is there, doing his best to be cheery and fun. So that's something. 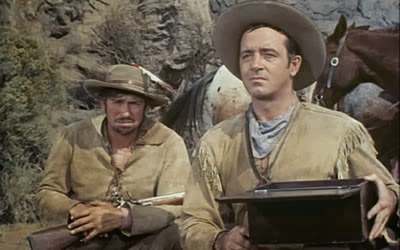 Sidekick Slim
The Kiowa chief is Satank (George Keymas) who is stabbed in the back by Faith Domergue’s squaw mother (Faith’s a half-breed too). As you doubtless know, it didn’t actually happen like that. Satank was killed in 1871 after being arrested by General Sherman and trying to escape.

Satank
The director William Witney had been churning out B-Westerns since 1933. Apache Rifles with Audie in 1964 was about the best but even that wasn't very good.


This is an early Western with single shot muzzle-loader rifles and no pistols. No date is given but I guess it’s 1840s or something.


By 1955 nearly all Westerns were vaguely pro-Indian and usually featured a brave, decent scout who tried to make peace with the Comanche/Apache/Sioux (delete where not applicable) but this one harks back to the 1940s because Payne is an Indian-hater (he hates half-breeds too) and there is mucho double-crossing on both sides. It’s actually slightly unpleasant in tone, this movie.


I’m afraid I can’t recommend it, not even for Slim, Leo and Anthony.