Tyrone Power, on Her Majesty's service

Tyrone Power didn’t really do Westerns. Any big studio star in the 1950s had to climb into the saddle occasionally but he was much more comfortable romancing exotic dames or buckling swashes. He was, of course, Jesse James in Fox’s big picture of that title in 1939 and a pretty dashing Jesse he was too. He also starred in a smaller but really rather good Fox Western in 1951, Rawhide, about a remote stage station being besieged by bandits. But he only did six cowboy films in total and apart from Jesse James and Rawhide, two were Canadian Mountie pictures, one was a Brigham Young biopic and in the other he was Zorro; they hardly count as Westerns at all.


After a tiny (uncredited) part as a Mountie in a small-studio B-picture, Northern Frontier, in 1935, his very first Western appearance, Power returned to the northern wastes in a red tunic for his last oater, Pony Soldier. Immediately, you recognize the (rather attractive) scenery of this ‘Canadian’ film as being Sedona, AZ. It’s all orange rocks and very unSaskatchewany. At least Universal’s rather unconvincing 1954 Raoul Walsh-directed Mountie picture Saskatchewan starring Alan Ladd had been shot on location in Alberta (and very nice the photography was too). Fox’s Saskatchewan was situated a tad further south. Never mind, it looks nice (the scenes not shot in the studio anyway). 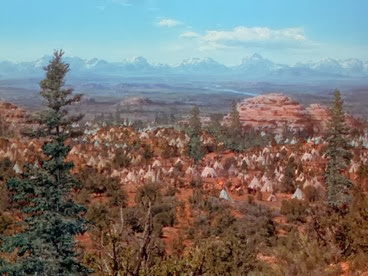 Canada, AZ
It’s supposedly based on a true story (but we all know how that goes in Hollywood) about a young, inexperienced Mountie named Constable Duncan MacDonald. It’s 1876. The RCMP has only being going for three years and no one has yet told Duncan that the Mountie always gets his man. As a result, he returns to base having let the fugitive he was pursuing escape. After this faux pas he is assigned to bringing the whole Cree tribe, which has fled its "reserve" over into the US, back into Her Majesty’s domains, as well as rescuing two captives that the Cree have taken. To achieve this mission he only has one helper, the comic-relief fat half-breed sidekick Natayo Smith, played, with gusto, by Thomas Gomez. New Yorker Gomez is one of the highlights of the movie, in fact. He was entertaining as the ship's captain in the New Orleans Dale Robertson flick The Gambler from Natchez. Here he brings life to what otherwise risks being a rather plodding ‘Western’. 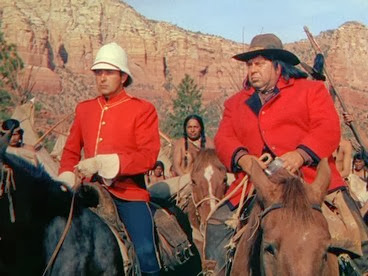 Tyrone with heavweight sidekick Gomez
Well, Duncan is brave and resourceful, you won’t be surprised to hear. And one of the captives (Penny Edwards, already in her tenth Western) is glamorous, which won’t surprise you either. The other is Flint McCullogh! What’s he doing here? A bit out of his way, isn’t he? Although the Wagon Train might have passed through Sedona, I guess. Anyway, Robert Horton is a bad guy, sneering and criminal. He has escaped from one of Her Maj’s jugs north of the border. Don’t worry, Duncan will see he gets back behind bars.


As part of the peace treaty, Duncan is semi-obliged to adopt a ten-year-old orphan boy of the tribe so Fox could have a kid in it. He’s played by Anthony Earl Numkena but I fear you will search Burke’s Peerage in vain for this Earl Numkena. 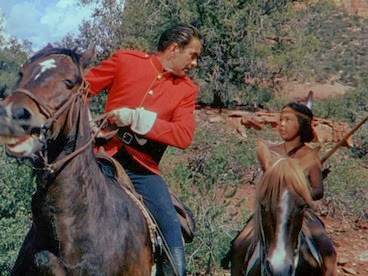 Duncan with adopted son
Always in these Indian pictures there’s a statesmanlike chief and a younger hothead brave who is all out for war. Pony Soldier is no exception and we have Stuart Randall (whose part had to be redubbed as his accent was too Texan) as the noble Standing Bear, while Cameron Mitchell (Buck Cannon from High Chaparral; I think of him more though in The Outcasts of Poker Flat, Garden of Evil and as the sheriff gone bad in Hombre) is very well made up and quite convincing as the warrior Konah (second billed, no less). 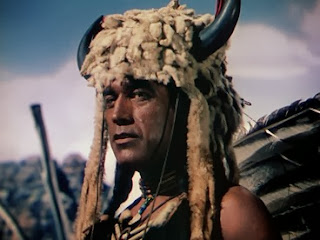 Stuart Randall as Candian chief with Texan accent
They say Richard Boone was in it but I didn’t spot him. Sadly. IMDb also says it was Earl Holliman’s film debut. What part did he play? I don’t know.


Anyway, Pony Soldier is watchable, in a generic sort of way, but don’t expect too much. 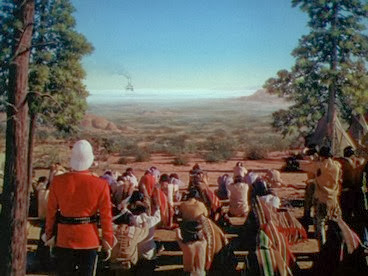 There's a bit where a mirage appears and Ty claims it is big medicine of Queen Vic, so they better toe the line