The least of Richard Brooks's Westerns

In one way this is a typical end-of-the-West tale because it’s set in 1905 and there’s a motor-cycle showing how out-of-date horses are. In fact, though, the characters are all classic Old West types and apart from the motorbike there’s no sign that the Wild West is disappearing. The characters don’t seem to be aware that they are anachronisms. All the scenery is the wild and unspoiled West.


Richard Brooks (1912 – 1992) was an auteury kind of director who won an Oscar for Elmer Gantry. He directed three Westerns. The first two were rather good: The Last Hunt in 1956 with Stewart Granger and Robert Taylor, and The Professionals in 1966 with Lee Marvin, Burt Lancaster and Robert Ryan, among others. They had classic Western credentials with something interesting to say as well. Bite the Bullet had certain qualities but is certainly not the equal of the first two.


It’s the story of a cross-country endurance horse race sponsored by a newspaper. There were in fact several such races. The most famous was in 1908, sponsored by the Denver Post, which put up $2,500 in prize money to the winner of a race from Wyoming to Colorado over a distance of 700 miles. Brooks clearly took this event as inspiration for Bite the Bullet. However, we are never told from where to where the movie race goes. I guess it’s supposed to be symbolic, man.

Horse-lover Hackman
The contestants have the slight air of mail-order characters for there is a horse-loving ex-Rough Rider (Gene Hackman), a drifting gambler (James Coburn), an old-time former Pony Express Rider who wants one crack at glory before cashing in (Ben Johnson), and naturally there has to be the inevitable posh Englishman (Ian Bannen), semi-feminist woman (Candice Bergen), noble Mexican (Mario Arteaga) and brash kid (Jan-Michael Vincent). Central casting could have done this job blindfold. 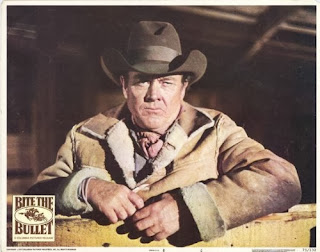 Old-timer Ben
Another problem with race movies is that they risk being staccato, episodic affairs as far as pacing is concerned and sometimes quite contrived plotting has to be adopted to prevent a slow and inexorable rhythm to the picture. Horses going 700 miles and stopping every night can only go so fast and can only be so interesting. There can only be so many plausible occurrences. 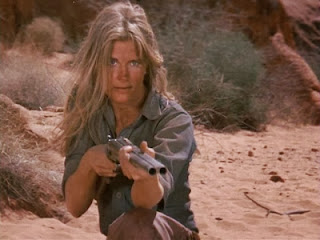 Feisty femme Candice
Still, the actors are by and large good and visually the movie is very attractive. It was photographed by Harry Stradling Jr., who had done Rooster Cogburn, Little Big Man and Young Billy Young, among others, so knew something about Westerns, and the Colorado, Nevada, and New Mexico locations were superb.


We cheer Gene (it was to have been Charles Bronson but he turned it down) when he beats up the kid because we have loved abusers of horses getting a taste of their own medicine ever since The Virginian took on Balaam for cruelly mistreating the sweet horse Pedro. Of course the kid learns the error of his ways from the wily old cowboys and reforms. The opening scene shows Hackman being nice to a foal – standard Western semiotics: anyone seen early in a movie being nice to young animal or young human is going to be the goody while anyone seen beating either is set up to be the film’s villain. 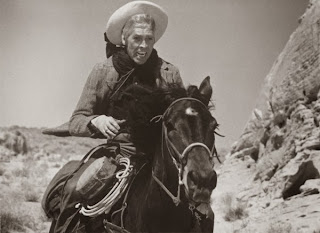 Coburn aims to win
Coburn is damned tough and gritty. Ben is suitably old and beat-up but it’s Ben Johnson so of course we are on his side. Candice is actually quite good as the whore with crook husband who turns out to have an ulterior motive for entering the race. Bannen did posh Brits in the West as a bit of a sideline (see The Deserter). He’s OK, I guess. He is handed a mere derringer with which to shoot his crippled horse and does this with a shaking hand from several yards away. I fear that animal may have suffered. 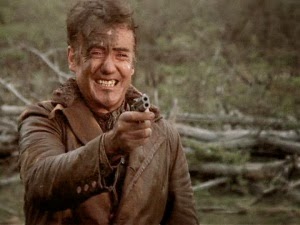 You don't really want to shoot a horse from several yards away with a derringer
J-M Vincent is OK as the youth. This movie was released on a double bill with another Vincent picture. 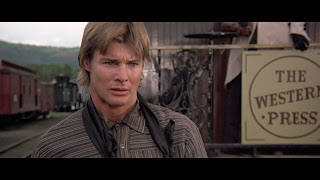 Vincent as wild kid who reforms
Bite the Bullet was nominated for two Academy Awards and won the 1976 Western Heritage Bronze Wrangler Award for best Theatrical Motion Picture. Not sure that I would have gone that far.