The commendable upsurge in interest in the real life and culture of American Indians in writing and movies from the 1950s on was largely the work of Anglo people, and the Indian life was, understandably perhaps, seen through a white lens. The stories were (still are, actually) usually recounted by having a white man join a tribe of what he at first thinks of as savages, then he comes to respect their culture. James Stewart as Tom Jeffords did this with the Apaches in Broken Arrow, Jack Crabb did it with the Cheyenne in Little Big Man, and in more recent times there was Lt. Dunbar (Kevin Costner) in Dances with Wolves with the Sioux and Eli McCullogh in The Son by Philipp Meyer with the Comanche. One of the pioneers, however, was Dorothy M Johnson, who did it with the Crow people. She wrote two quite well received novels in the 1970s but is better known for her short story collections Indian Country (1953) and The Hanging Tree (1957). A Man Called Horse comes from Indian Country. 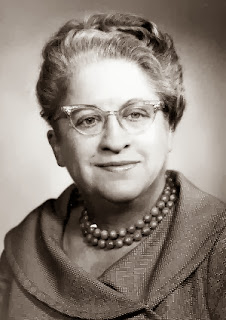 Dorothy M Johnson (1905 - 1984)
A Man Called Horse is a brief, 15-page story which tells of an unnamed young man, member of a rich Boston family, who while out in the West in 1845 is captured by a party of Crow, who kill and scalp the guides and servants he has engaged. The Crow take him to their village where he is given as a slave to an old woman, Greasy Hand, mother of a leading warrior, Yellow Robe. He must endure many hardships, not least of which is being treated as sub-human and as a beast of burden. He gives himself the name of Horse, as being better than no name.


He gradually acclimatizes and after four months begins to pick up the language. He manages to overcome one of two passing Indians, “a member of some enemy tribe”, and wins two horses which he presents to Yellow Robe for the hand of his sister, Pretty Calf, whom he calls Freedom. The wife and child perish in premature childbirth, and “he went home three years later”. He remains, when back in “civilization”, very reserved about his ordeals.


The story is tersely told, without embellishment and in a matter-of-fact, practical way. There is, however, occasionally some elegant writing (I like it, for example, when Horse in love is described as being “enslaved by Freedom”).


Many details of this short story and, more, the essential tone of it were changed radically for the motion picture. By 1970 (the year of Little Big Man, the film and also of Soldier Blue) we were in full revisionist mode but if we were all going to movie theaters to see more Indian-oriented movies than the old cowboy ones, we were still watching commercial pictures which slightly reveled in the cruelty, and never mind too much if it were accurate. You don’t go to the movies to see a Western for an anthropology lecture.


A huge change is that the Crow were replaced by the Sioux. I don’t know why. The hero, now named as John Morgan, has become an English aristo with rather 1970s blond hair. You’d think the Indians would have wanted that scalp on their lodge-poles or bridles but nay. Morgan is played (and this is one of the major weaknesses of the film) by Irishman Richard Harris, a notorious ham. The old hag Greasy Hand is strongly, if stereotypically played by Australian Judith Anderson, and Yellow Hand (no longer Yellow Robe – maybe the Yellow Hand moniker brought back vague notions of Buffalo Bill) is played by Fijian Islander Manu Tupou (who popped up briefly again as the pawnbroker in the excellent Payback). Pretty Calf has been renamed Running Deer and is played by a Greek, Corinna Tsopei, attractive in a sweet way. Some of the actors in the smaller parts were American Indian, however, and the movie was partially shot on location in South Dakota. Some of the Robert B Hauser photography, especially early shots of Indians running, is very classy. 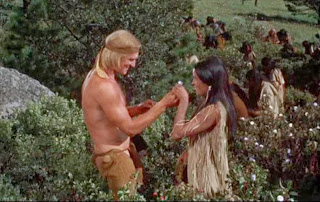 Irishman woos Greek
Mr. Harris is, early in the picture, often seen pinkly naked and this heightens his vulnerability and non-person status.


The movie centers on the famous and deeply unpleasant scene of initiation which involves Harris being hauled up in the air on rawhide thongs attached to knives inserted in his pectorals. This rite is completely invented; it was not in the Johnson story and was never practiced by either Crow or Sioux. It has a lurid and salacious ring to it and has always put me off the film. The film is one of those which irritatingly claims to be authentic and factual historically. It is nothing of the kind. As I have so often said in this blog, I have no objection to Western movies distorting historical truth – they are there to tell an exciting story, not give you a history lesson – but when they mendaciously claim to tell the factual truth, then I do object. 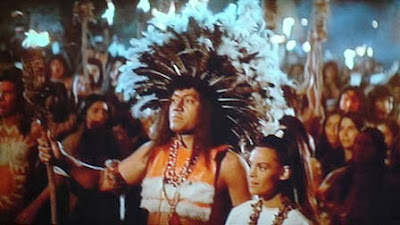 He looks more Fijian than Sioux
There are other changes. The film invents another captive, Batise (third-billed Jean Gascon) who conveniently speaks English and French – which of course was perfectly possible – and that overcomes Harris’s language problems. In the movie, unlike the story, he never really learns the lingo. (The decision to have a lot of Sioux dialogue with no subtitles was a brave one but was the right way to go; it highlights Horse’s isolation, and we can anyway usually infer what is meant.) Horse kills two enemy Indians, Shoshone, in the film and scalps one. Makes it a bit bloodier. One detail, however, is gorier in the book than the on the screen: old Greasy Hand beheads an annoying dog in the story. Pierced pecs are one thing, but showing a pooch killed on screen, such horrors would never do, so that was quietly dropped.
The director was Elliot Silverstein, who had only done one other Western - and that was Cat Ballou.


By the way, long before Richard Harris, a 1958 episode of Wagon Train also used the story (this time it was Yellow Rope for some reason, played by Hollywood’s resident Indian chief, Aussie Michael Pate) and used the same title, A Man Called Horse. It had as Horse Ralph Meeker – Roy Anderson in The Naked Spur and Lt. Driscoll in The Run of the Arrow, another lurid Indian-rites flick with an overacting star not suited to Westerns.