The Wild West for real


A Frontier Doctor by Henry F Hoyt (edited by Doyce B Nunis, Jr., Lakeside Press, RR Donnelly & Sons Company, Chicago, 1979) – no relation to the 1911 silent movie A Frontier Doctor with GM ‘Broncho Billy’ Anderson or the 1958 TV series Frontier Doctor with Rex Allen – is the autobiography, first published by Houghton-Mifflin in 1929, of Henry Franklin Hoyt (1854 – 1930). It’s a great read. 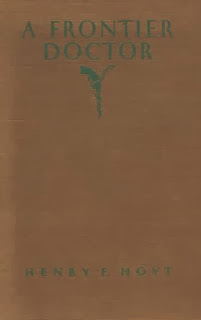 First edition
I first came across Henry Hoyt as he tangentially affected the lives of Jesse James and Billy the Kid at a reported meeting of the two outlaws in Las Vegas, NMT. It’s a fascinating story which I’ll tell you about some other time. But the principal source for such a meeting was the autobiography of Dr. Hoyt.


Hoyt’s book is a breezy, straightforward narrative and its interest is not so much in its author’s relatively modest attainments as in the places he went and the people he bumped into.


He was born on a farm at St Paul, Minnesota Territory. His parents had moved there in 1848, at a time when there were only 4000 residents in that huge region, 910 of whom lived in St Paul. By the time Henry was four years old, Minnesota was a state and St Paul was the state capital.


Five uncles went off to the Civil War in 1861. Two of them distinguished themselves at Gettysburg.


When he was eight, the Santee Sioux of Minnesota, near starvation, poorly supplied by corrupt and incompetent Indian agencies and offended by ever-increasing white encroachments on their land, rose in revolt. In little more than a month, up to 800 settlers and soldiers were killed and an untold number of Sioux. Of course it was doomed. General HH Sibley defeated the Santee at the Battle of Lone Tree Lake in 1862. 38 Santee were executed and within two years the Santee were driven out to reservations in present-day South Dakota. But Minnesota remained a dangerous place when Henry was growing up. His father was in the state militia.


How distinctly I remember sitting up most of that night helping my father mould [sic] bullets for the anticipated encounter on the morrow.


As a young man Henry joined a railroad survey party pushing West and he recounts his adventures with gusto. He was not a modest man and the narrative is peppered with phrases such as “Being a strong swimmer…”, “As I was a good shot…”, “I could cover 100 yards in ten and three quarter seconds”, “Being big and strong…”, “I could play [on the violin] any tune by ear”, and so on, but you don’t seem to mind. It comes across as youthful enthusiasm rather than boastfulness. 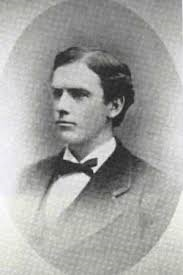 
In September 1876 the James-Younger gang's raid in Northfield, Minnesota took place. Henry was not there but of course he heard all about it and he recounts how the body of Charley Pitts (aka Samuel Wells), one of the gang, was taken to St Paul where it was to be used for medical science. In March '77 the remains were turned over to Hoyt.
Pitts was a fine specimen of physical manhood and I decided to retain and mount his skeleton for use in my office after my graduation.
As a good method of preserving bones for this use is to store them underwater for a long period, Hoyt then packed the bones in a shoe box, weighted it with stones and sank the box into Lake Como, near St Paul. Years later, when Hoyt was in Las Vegas, NM, the lake froze over and the box came to light. A hue and cry was raised, unbeknownst to Hoyt, over the dastardly murder that must have been committed, for the bones were full of bullet holes. Not until Hoyt’s brother, who had helped Henry sink the bones, came to hear of it and contacted the inquest, did the fuss die down.
But the story really starts, as far as the Western lover is concerned, with Henry’s decision to head West. He had decided to become a doctor and had started as an intern and at college but he needed money to complete his studies and, we detect, had itchy feet. The discovery of gold in the Black Hills drew him by stage to Deadwood.


At this period, there were no laws regulating the practice of medicine and surgery, so I decided to locate in some live town and practice.


It was a live town alright. He arrived in May 1877, less than a year after the assassination of Wild Bill Hickok. He had already met Capt. Myles Keogh of the 7th Cavalry, the famous Scottish surgeon Joseph Lister and detective Allan Pinkerton. Now he added Calamity Jane to the list of people he ran into. As the book progresses, and Henry, finding no gold in Deadwood, goes down to New Mexico and the Texas Panhandle (where he cowboyed and acted as doctor at the same time), he tells us of encounters with rancher John Chisum; the man who shot Dora Hand in Dodge, Spike Kenedy; cowboy and later detective Charlie Siringo; rancher and pioneer Charles Goodnight; Billy the Kid; Jesse James; Pat Garrett; former-President US Grant; Governor Lew Wallace; boxer John L Sullivan; General Arthur MacArthur and Secretary of State Frank Kellogg. It’s quite a list, you will agree, and it’s what makes the book such fun.


QUIZ. Some of the people Hoyt knew. Spot the celeb.
(Answers at the end of the post.)

I personally prefer the time in New Mexico, partly because I know the area and its history quite well and partly because that’s the most exciting part. Henry was bartender at the Exchange Hotel on the plaza in Las Vegas, then postmaster there. He was very much in touch with the people and goings on. He met Billy the Kid several times after the first encounter in Las Vegas, and indeed was given a race horse, Dandy Dick, by Billy, with bill of sale (though where Billy had acquired it is another matter). He later discusses Billy’s case with Governor Wallace.
One slightly shocking aspect of the book is the fact that Hoyt was clearly a decent, educated, teetotal man of considerable probity and moderation, yet he was in Las Vegas member of the so-called vigilance committee and took part, with apparent sang froid, in several lynchings. He describes these mob hangings cheerily as 'necktie socials' and it is evidence of how casually murders of this kind were carried out, and almost socially acceptable, in nineteenth century America.
Henry set up a medical practice in Bernalillo, NMT before, in the fall of 1881, heading back East to complete his studies. After qualifying, he returned to St Paul and became consultant doctor to railroad companies. In 1889 he was appointed head of the Health Department in St Paul.


The later part of the book, not so interesting for a Western fan but still good reading, describes his service in the Philippines during and after the Spanish-American War. He then practiced in El Paso and Long Beach, California, where he eventually retired with his wife and son (all three had been injured in a house fire in Manila) and died suddenly in Yokohama, Japan on his way home from a return visit to the Philippines in 1930, the year after his autobiography was published - to quite good reviews. 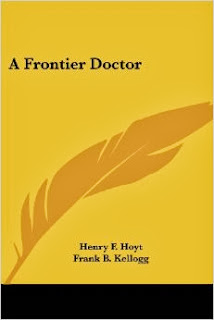 Paperback with, apparently, a foreword by Kellogg
The book was quite hard to find when I got it, a few years ago, but is available now in paperback and I do recommend it.