The idea is that a traveling circus of acrobats, sharpshooters and strong man (all useful for the gags and stunts) led by la Moreau and la Bardot meets a dashing revolutionary (George Hamilton) who dies for the cause and the gals vow to continue la revoluccion on his behalf. Luckily, Brigitte happens to be a firearms expert. 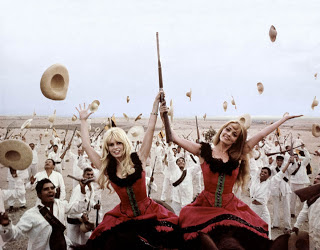 Viva!
It’s mid-sixties pop cinema with very little now to recommend it. It has not dated well.


It was directed and written by supposedly class-act French director Louis Malle, later to do quality takes on transatlantic society with Pretty Baby and Atlantic City but in 1965 still with everything to learn.


There’s a rather daring bit for the mid-sixties where Jeanne makes lerve to a semi-crucified George Hamilton. It’s all very tame by today’s standards but caused something of a stir at the time, with US court cases on censorship (they decided that it was fine for a 17-year-old to see but it would irredeemably corrupt a 16-year-old). 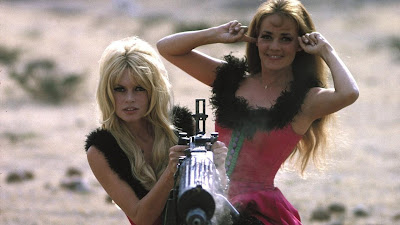 Les mitrailleuses
Most of the action takes place during the opening titles. We get the whole life story of the Marias. It slows down a bit after that.


They accidentally invent striptease and a gun that shoots round corners.


It’s quite nicely anti-clerical and the Catholic padres are sinister KKK types who support the brutal dictatorship. Their head honcho (forgive my lack of knowledge of Roman Catholic hierarchical nomenclature) gets his head blown off at the end. There’s a hint of feminism: Bardot is as much the huntress as the hunted, as she chalks up the names of her conquests in her caravan. So underneath the slick, silly, sexy, sixties romp there is a hint of the subversive. That’s why it gets two revolvers. As a Western it would struggle to get even one.


Hamilton was a last-minute replacement for Alain Delon.
Brigitte came back in 1971, this time with Claudia Cardinale, in Les Pétroleuses, known in the US as Frenchie King. It was no better. There was a kind of remake in 2005, Bandidas. It was a lot worse.


You can forgive comedy Westerns a lot if they are funny. But if they aren’t, they don’t have a great deal to recommend them. Nothing, in fact. And I’m afraid this one is in the second category. The Marias are naturally very decorative but dud gags, poor lines, very fake stunts and weak writing don’t add up to a hell of a lot, I’m afraid. 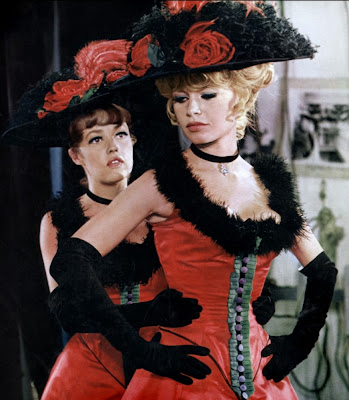