Unchallenging but not Junk

On one level, The Outsider is just another unchallenging, family-friendly Hallmark movie. I don’t remember it in the theaters and it doesn’t have those mini-action-climaxes and frequent fades-to-black that TV movies have, so maybe it was a straight-to-video affair, I don’t know. But I think it’s a cut above the bland pap-fiction that sometimes appears in this way.


It’s certainly a very female film. Directed by a woman (Randa Haines), written by one too (Jenny Wingfield), from an original novel by a woman (Penelope Williamson), and with the story seen from an essentially female perspective (I hope I’m not being sexist here and I don’t think so), still, it’s a long way from a quality, seriously feminine picture like The Missing. 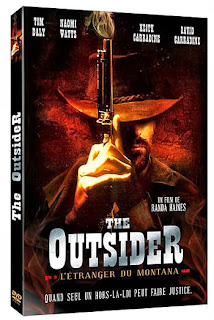 Worth a look if it comes on TV but maybe not a DVD purchase
It’s one of those movies where the actors are all perfect-looking, you know, gleaming teeth and immaculately brushed blond hair. The kid is angelic and the woman beautiful and the man macho and tall. That was always a weakness in Westerns that told of tough life on the frontier. The people never seemed ordinary enough. We never get women with bad skin and buck-teethed kids. 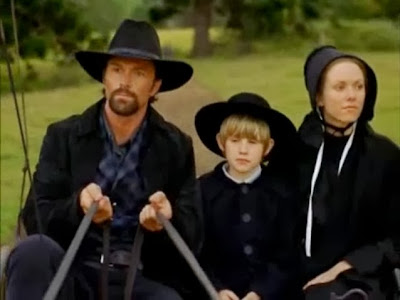 Too good to be true
The plot falls somewhere in the Angel and the Badman, Shane and Riders of the Purple Sage ball park with a bit of Witness thrown in. Against a very 2D backdrop of evil rancher vs. honest homesteader conflict, a lone Shane/Lassiter-style gunman staggers, wounded, into the life of a widowed farmer woman who is ‘Plain’, member of a strict religious order (Quaker? Mennonite?) that does not even allow music in the house. The gunfighter of course takes up the cudgels (well, Colts anyway) against the grasping big rancher in defense of the noble underdog farmers. The woman is against his using violence, but comes round and stands by her new man, even at the cost of being shunned by her community.


So far, so conventional and unremarkable. But the film does have something nuanced to say on violence, on the evil that religion can do even when it appears good, and on the corrupting power of sects.


I didn’t like the music (Todd Boekelheide), which is of the type sometimes called ‘haunting’. I don’t know if the people of the religious order were supposed to be Norwegian but the soundtrack is based on Norwegian folk tunes. Folky can become hokey and some of it is rather New Age woo-woo with a 1990s feel to it. Likewise, much of the photography (Ben Nott, his only Western) is very nice but it also occasionally falls into the temptation of filtered nostalgia/sugar. Interestingly, the movie was shot in the Gold Coast, Queensland, and it does look very like Pennsylvania or points West of there. We are used to film makers having to go to Alberta for contrail- and powerline-free scenery but maybe the future is down under. 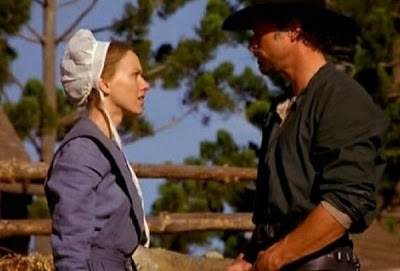 The love story part OK if you like love stories
One good thing about the movie is that there is a brace of Carradines in it. David of that Ilk was especially good as the world-weary cynical old doctor, brother Keith not quite so convincing, I fear, as an elder with a Mormon-fringe beard. Still, great to see them. They lift any Western.


I didn’t know the other actors. Naomi Watts is apparently English. Wonderful how these non-American actors manage with the language and accents. She was to be in the 2003 Ned Kelly so was gaining experience at Ozzie ‘Westerns’. Her character’s name appeared to be Yoda when watching the film, which was a bit odd, but it turned out to be Yoder. 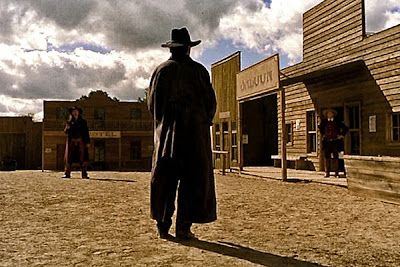 The Western part much less convincing
The Outsider is really just a love story that happens to be set in the 1880s West. If you like love stories, you’ll enjoy it because it’s well made and properly acted. There are some soft-focus love scenes, far too discreet to be accused of soft porn, so your teenage children won’t be embarrassed if they watch it with you (not that they ever do). The camera lingers lovingly (and rather too much) on the glowing Rebecca Yoder. We are on the very edge of schmaltz here, Romance anyway, and one wonders if the original novelist wrote for the Mills & Boon imprint.
For me, though, the properly ‘Western’ part, the story of the Shane-type gunfighter standing up against the open-range rancher on behalf of the decent homesteaders, wasn’t well enough developed (who shot him in the first place, and why?) or interestingly done. The director and writers didn’t really seem that interested.
You want to see a good Western with a woman nursing a shot gunman back to health and falling for him? Watch Angel and the Badman or The Revengers. You want to see one about a mysterious stranger who comes into the valley and fights for the homesteaders? Have another look at Shane. You want a story about a woman of a religious community wooed by a tall, dark gunman? Read Riders of the Purple Sage. All of these are way better than The Outsider.