Not the greatest start for Audie's Western career; still fun though

War hero Audie Murphy went into movies in the late 1940s, first with a bit part in Texas, Brooklyn and Heaven (1948), then with a small part as a cadet in the John Farrow-directed Beyond Glory (1948), and then in his first starring role as juvenile delinquent Danny Lester in Bad Boy (1949). It was absolutely inevitable, however, that his Western career would start with him as the juvenile delinquent of juvenile delinquents, Billy the Kid, and sure enough, in 1950, he starred as William Bonney in The Kid from Texas.


He went on to make 33 feature film Westerns and 26 episodes of Whispering Smith on TV. His long-lasting baby face secured him ‘kid’ roles well into the 1960s. Even in his first Western, as Billy, he was already 25, whereas the real Bonney died aged 21, though Murphy does look incredibly young. 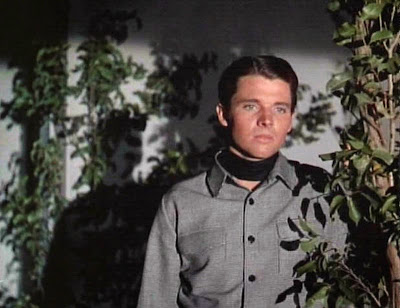 Audie as Billy
Many of his early Westerns were unambitious and conventional affairs, and Audie did his best but he was still learning. He himself modestly said, "I'm working under a great handicap . . . no talent." That wasn't in fact the case but certainly, at the start anyway, he tended to just be himself, not 'acting' at all. He often looked expressionless. But in a Western that works. Western heroes are supposed to be reserved, taciturn, stoic. The Universal oaters had reasonable budgets and were no poverty row shockers but somehow they all looked like B-movies. They’re enjoyable and some of them are good (see, for example, Ride Clear of Diablo or No Name on the Bullet) but only in The Red Badge of Courage in 1951 and later in The Unforgiven in 1960, both directed by John Huston, did Audie really show what a powerful and talented professional actor he really was. "No talent" my foot. But it is true that he doesn’t shine in the majority of his early Westerns, which he plays in a pretty low-key way. 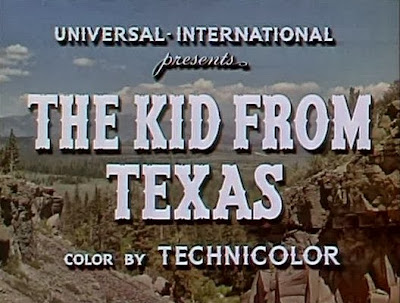 Rather missable, I fear
The Kid from Texas is a typical early Audie Western. It tells the tale of Billy the Kid (being Audie, they invented the fact that Billy came from Texas, which of course he did not) and it is one of those annoying movies that begin with a mendacious voiceover saying, “The facts were as you will see them.” This pseudo-factual approach is strengthened by the spoken commentary (by Parley Baer) that punctuates the narrative, giving a ‘documentary’ feel to the film. Many movies were perfectly happy to tell the fanciful legend of Bonney/McCarty/Antrim (take your pick) and have a lot of fun but without absurd claims as to veracity. But for some reason makers of Westerns often felt moved to claim historical authenticity, even for the most ludicrous exaggerations and falsehoods. Universal, director Kurt Neumann and writers Robert H Andrews and Karl Kamb went down this route but the story of Billy as told is not "the facts": it is in fact complete bunkum. 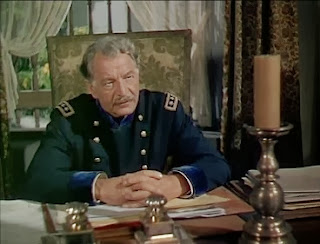 Governor Wallace taking a break from writing Ben Hur
As told in this version, Billy goes to work for an English lord in New Mexico, Roger Jameson (Shepperd Strudwick, who was born as near to London as you can get in North Carolina). Jameson - the Tunstall figure, obviously -  is gunned down on his own ranch by the henchmen of evil rival rancher Major Harper (Denis Hoey). Jameson has persuaded Billy to hang up his (over-fancy) two-gun rig but now of course Billy straps the pistols on again to get his revenge.


Jameson’s partner, the McSween figure, is Alexander Kain (geddit?), played by the great Albert Dekker. He takes over the business when Jameson is killed but is a two-timer. He has a glam young wife, Irene (Gale Storm) and Mr. Kain suspects a liaison between her and Billy, but any affair between the two is only hinted at and Billy himself dismisses the idea loudly. Nor does Billy dilly or dally with any dusky maidens.


Governor Wallace (Robert Barrat) rides out in full Union General uniform to meet Billy in the wilds of New Mexico but makes no deal or promises, merely tries, unsuccessfully, to persuade the boy to turn himself in. Billy refuses, without saying why (nor is it clear). Lew appoints Pat Garrett (Frank Willcox, looking very like John Dehner as Garrett in The Left-Handed Gun) as county sheriff and after a quick escape from the burning Kain home and from the Lincoln County jail (the Ollinger figure he shoots with a shotgun is a certain Minninger, played by William Talman) Irene Kain goes off to stay with the Maxwells and play waltzes on the piano at Fort Sumner, Billy listens at the window and then Pat arrives… Fin. 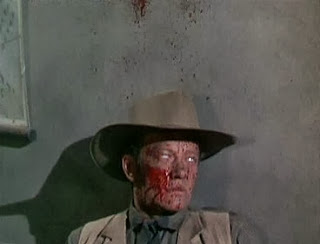 The death of 'Minninger', a lot of tomato sauce, quite graphic for 1950
You see? Complete tosh.


You will notice from the above that many of the actors are pretty well B-list but diversion is provided by the great Ray Teal as No 1 corrupt Sheriff Rand and fat Paul Ford as No 2 corrupt Sheriff Copeland.  We also have Will Geer in a sort of Gabby Hayes amusing sidekick part as O'Fallon. Walter Sande is there and Robert J Wilke is a (disgracefully uncredited) henchman. So there are some good Western character actors to divert us. 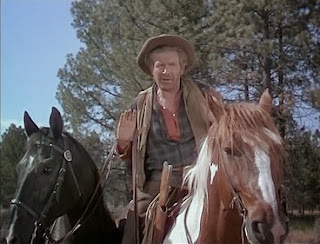 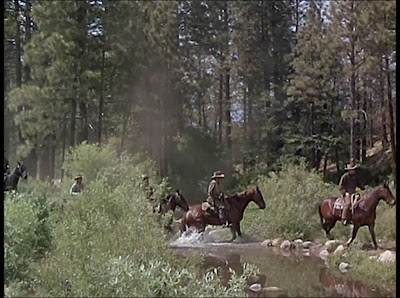 Some nice scenery
The dialogue is downright corny, I’m afraid, and chock-full of clichés. The movie may have been alright for a 1950 juvenile audience (and their dads) but honestly, sorry to say it (because I'm a bit of an Audie fan) it is pretty second-rate.

It did well at the box-office though. Murphy's fame helped a lot and casting him as a troubled youth resorting to violence didn't hurt.


Purely as a Billy the Kid movie it was no worse than many another and a lot better than some, despite the monkeying about with "the facts".

Later the same year Audie would give another violent youth the same treatment when he played Jesse James in Kansas Raiders.