How much difference a definite article makes. Just as, long before Unforgiven, there came The Unforgiven, so forty-two years before Ed Harris’s excellent Appaloosa, came Marlon Brando in the much weaker (if more arty) The Appaloosa.


As the title suggests, it’s the story of a man’s passion for a horse. Brando wants to breed Appaloosas but his fine stallion is stolen from him by dastardly Mexican bandit John Saxon, aided by the even dastardlier Emilio Fernandez. Brando is obliged to cross over into Sonora and go after his nag.


Of course Saxon’s mistreated woman Trini (Anjanette Corner, very 60s looking) is pretty and needs to be rescued from his clutches. 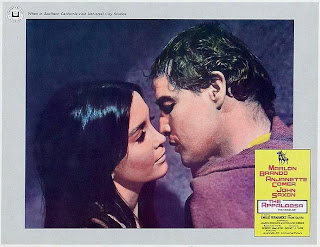 It's lerve
The screenplay was by James Bridges and Roland Kibbee from a Robert MacLeod novel. If only it had been Elmore Leonard. Then we would have got authenticity, tension and fine dialogue. As it is, even though the movie is only 99 minutes long and the story quite simple, it manages to drag.


The main trouble, though, is Marlon Brando. He is so busy acting that the actual character never gets a chance. We feel throughout that we are watching a famous thespian playing a role. We never for a minute forget that or believe in Mateo, the character. Brando looks OK once he has removed his fright wig and false beard (he ‘shaves’), and is not too overweight or improbable, as he later often was, but his Method acting is tiresome to watch. For some reason, when in Mexico he suddenly starts speaking English with a Mexican accent. 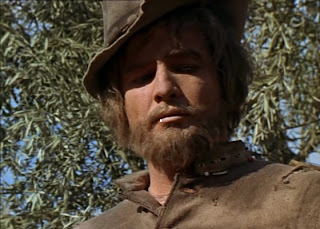 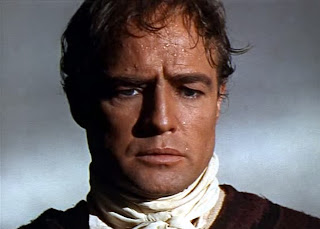 Without applied facial hair. Just acting.
Brooklyn-born Saxon tries hard with his Spanish accent and suntan and is quite menacing but not very. Fernandez is splendid, as always, though he hasn’t a part worthy of him and his character is not developed. Frank Silvera plays the obligatory honest old peasant farmer with heart of gold. He had been in Viva Zapata! and was later used in Hombre, whenever, in fact, a Mex was needed, although in fact he was a Jamaican. 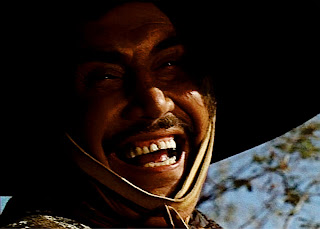 The great Emilio Fernandez
Miriam Colon is in it. She was always good. She was also in Brando’s earlier, rather weak Western, One-Eyed Jacks.


There’s some psychobabble about impotence. The idea is that the bandit can’t satisfy his girl whereas Brando, with his potent stallion and symbolic long gun - oh, you know.


The movie was directed by Canadian Sidney J Furie, who had done The Ipcress File the year before and would later do some episodes of Lonesome Dove: The Series, although he was not known as a Western director. It’s not clear how much of the very arty photography and shot-framing was down to him and how much done by cinematographer Russell Metty, or even Brando himself (it was the sort of thing Brando liked). But there’s a lot of it – characters enter saloons seen through the glass of a bottle, we peek at Brando over the huge brim of Fernandez’s hat, that kind of thing. We also have some proto-spaghetti ultra-close-ups of faces. Some of the outdoor shots of the (presumably) Mexican locations are very fine and certainly down to Metty. Visually, it reminded me of Valdez is Coming.


The score is credited to Frank Skinner but it’s one of those movies where silence reigns and in fact is the more tense for that. Minimal or absent music can work very well.

The arm-wrestling over scorpions was good. 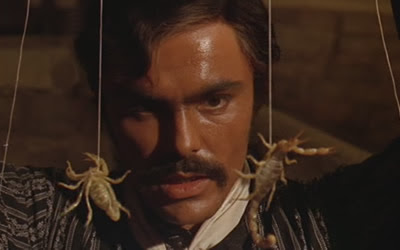