A mid-50s pro-Indian picture starring a pre-Wells Fargo Dale Robertson, this gives us a semi-revisionist portrayal of Little Bighorn and it has certain merits, not least its Mexican locations shot in CinemaScope color.


However, Robertson looks absurd in Gene Vincent hair and is very wooden, J Carrol Naish, 60, is unconvincing as an elderly Sitting Bull (Bull was actually in his 40s) and such liberties are taken with history as to make it laughable. 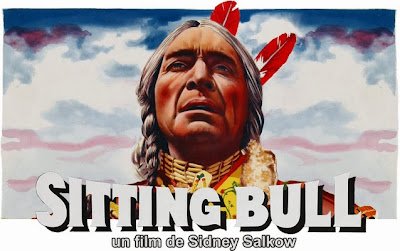 Tȟatȟáŋka Íyotake, also nicknamed Slon-he or "Slow", more commonly known to us as Sitting Bull, a Hunkpapa Lakota spiritual chief and tribal leader of his Sioux people, lived from c. 1831 to his murder in 1890. He was very active in gathering Indians of various groups and he reported a vision he had had of the white soldiers suffering a major defeat but he did not take an active part himself in the battle with Custer. In May 1877 Sitting Bull led his people into Canada, staying there four years and refusing a pardon and the chance to return. However, hunger and desperation eventually forced him, with 186 of his family and followers, to return to the United States and surrender on July 19, 1881. In 1885 he participated in Buffalo Bill’s Wild West show, forming a friendship with Annie Oakley. In December 1890 he was murdered by Indian police sent by Indian agent James McLaughlin to arrest him at his farm. 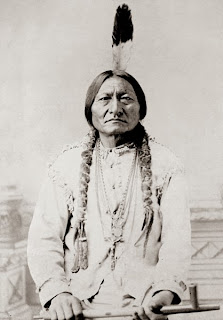 
Hollywood has often shown Sitting Bull and, unusually, often used Native American actors to portray him. In a 1912 silent, William Eagle Shirt was Sitting Bull in Francis Ford's Custer's Last Fight, and in 1922 Chief Lightheart played him in In the Days of Buffalo Bill. Chief Yowlachie was the Bull in Sitting Bull at the Spirit Lake Massacre (1927) and Chief Thunderbird did the honors in the 1935 talkie Annie Oakley (the one with Barbara Stanwyck as Annie). In more recent times, well-known American Indian actors such as August Schellenberg, Graham Greene and Eric Schweig have all played Sitting Bull in various movies and TV shows.

But it was New Yorker J Carrol Naish in the 1954 picture Sitting Bull. He'd also played the Bull in the 1950 Annie Get Your Gun (the Betty Hutton one).


At a peace council (participated in also by Sitting Bull's women - very likely, I don't think) wise statesmen Dale and Bull are all set to come to an agreement and avoid war, and Dale has persuaded President US Grant to come out to Montana and have a parley, when arrogant fool Custer (B-Western actor Douglas Kennedy, the Bob Hope-lookalike telegraph operator in Rails into Laramie) disobeys orders and attacks. The Indians, with blankets over Western saddles, surround him. Custer’s last stand seems to have been made in a hollow, and he, of course, is the last man killed as he waves his saber. Sitting Bull orders the Indians not to scalp or otherwise mutilate the dead. So you see how authentic it all is. 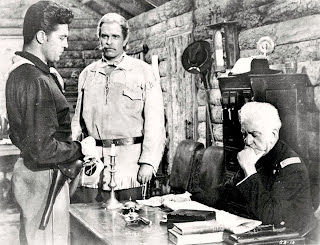 Wise Captain Robertson with arrogant Custer
The day after, Dale leads the post-Bighorn Sioux north to Canada for safety, then is arrested for treason for this act. Sitting Bull comes back (he gets back from Canada in 48 hours) to save him from the firing squad. It really is all preposterous twaddle.


Well, as I have often said in this blog, we don’t criticize Hollywood Westerns for not being historically accurate. They are entertainment, after all, and not documentaries.

Custer's last stand, B-movie style
There’s love interest, of course, in the curvaceous shape of the general’s daughter Kathy (Mary Murphy) but she is very unpleasant and dumb too. She won't even listen to Dale's side of the case and throws him over for a newspaper correspondent, Wentworth (William Hopper). She has hardly got her claws into this paper boy before she is asking him, as he prepares to cover the big Custer story, if "News is more important than our marriage?" Wentworth, who is killed alongside Custer, is presumably a Mark Kellogg figure. Marcus Kellogg (1831 – 1876) was a reporter for the Bismarck Tribune and said to be one of the first killed at Little Bighorn. Lucky escape for Wentworth, that, being killed, and bad luck for Dale, stuck at the end of the movie with such a ghastly woman. 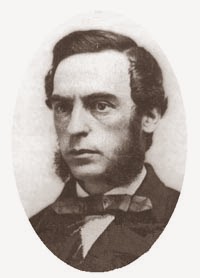 Marcus Kellogg
One good thing: there’s a black man, Sam (Joel Fluellen) who has been living with the Sioux, a bit like Lavender in the Thomas Berger novel Little Big Man, who allies with Dale. African-Americans, often freed or escaped slaves, did sometimes join Indian tribes. They were known as black white men.


The fort is one of those toy ones Hollywood loved, a wooden stockade made of pointy logs. Of course forts weren’t like this at all but rather buildings in an open space around a parade ground, as any visitor to sites such as Fort Laramie or Fort Apache will know. Here in the wooden fort President Grant (John Hamilton) meets Sitting Bull and they shake hands on a peace deal.


The evil Indian agent at the reservation (Thomas Browne Henry) is quite well done. Many of these agents, especially in Grant’s administration, were disgracefully corrupt, starving the Indians in their charge and holding back government rations for resale for personal gain.


Very much a Custer B-Western, Sitting Bull does have a sort of message about arrogant and overweening US military.

But it's a two-revolver picture at most.