It is a commonplace that there are not many plots for a Western. You can have revenge plots, or chase stories, or tales about men trying to live down their past; brave souls fighting nature to survive, also. Seraphim Falls manages to combine all of the above in one film and it seems to have been a conscious effort to make a ‘classic’ Western.


Competently directed and co-written by David Von Ancken, in his feature film debut (though he was an experienced TV director), the movie, set in 1868, tells of a man named Gideon, apparently trying to atone for his past, isolated in high mountain country, who is ruthlessly hunted by another man, Carver. The reason for this manhunt is only revealed gradually, in flashback, as the film progresses. This flashback part might have been borrowed from The Outlaw Josey Wales. Gideon is good at survival and though shot and disarmed, manages in a slightly John Ramboesque way to elude Carver and decimate his unsavory posse. 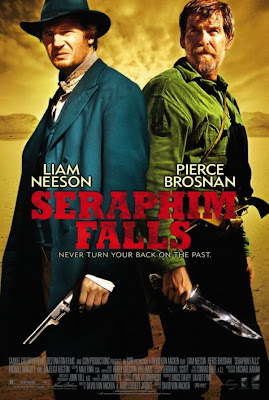 Back-to-back or face-to-face Irishmen
Von Ancken chose, deliberately, I am sure, two very similar men as his protagonists: both Irish, roughly the same age and both tall. They are costumed similarly and everything contrives to make them a matched pair. Pierce Brosnan (Gideon) and Liam Neeson (Carver) were far from Western specialists (Brosnan had appeared in Grey Owl, a 1999 Richard Attenborough-directed film about a 1930s Canadian conservationist, hardly a Western) but together they are a class act, it must be said. Bearded Brosnan, used to action films, of course, did many of his own stunts, and is convincing as he battles the elements and his pursuers. Neeson is implacable and relentless as the hunter. Neeson says on the making-of part of the DVD that both were like small boys once they got their Western costumes on. Lifelong Western lovers, they were in their element. I get that!


The episodes in the settlers’ cabin, among the crooked missionaries and at the railroad camp are well handled directorially and well acted. They add color and interest to the chase. Chase stories can sometimes move ploddingly at the pace of the tired horses (or men staggering on foot) and these interruptions or pauses break up the relentless action and change the pace. The long pursuit never becomes tiresome. Of course Von Ancken never has to ‘cut to the chase’ because the film is the chase.

Brosnan, Von Ancken, Neeson
The incidents with the Indian at the water hole and the elixir saleslady in the desert are less successful in this regard: towards the end of the film, there is a probably regrettable attempt at (let’s be generous and call it) magic realism, as Wes Studi appears as a character named Charon (deep, man), guardian of the only water hole, to tell the characters that nothing is free and everything has a cost.

Then, in the flat salt lands of the New Mexico desert, miles from any tree, Anjelica Huston suddenly appears from nowhere in a horse-drawn wagon. She is an angel (or an Anjelica anyway) of death, or perhaps the devil, dressed in red with low-cut corset, who makes a Faustian bargain with both Gideon and Carver, ensuring that both have a gun with only one (anachronistic) cartridge for the forthcoming final duel.

You might enjoy these surreal insertions though some have described them as “pretentious, surreal gimmickry“. The title too is weighty with symbolic meaning as the two angelic characters fall from grace. Gideon in the book of Judges was God's chosen soldier: perhaps we are supposed to see Carver's Confederates as Midianites. Or maybe we can take this symbolism business a bit too far... 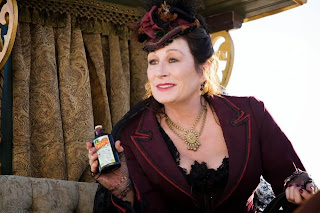 Surrealism in the shape of Wes and Anjelica
Of course the moral of the movie does not only apply to the American Civil War. Any war film is really an anti-war film and this somewhat portentous picture has a Meaningful Message which is hard to miss. 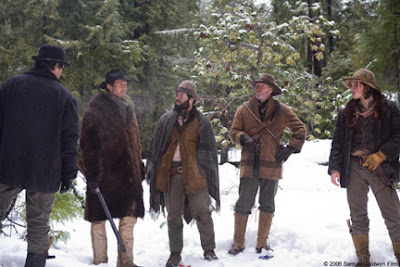 The posse
These days, animals are not harmed in making these films but Brosnan sure uses up mounts in the movie. He rides them to death or slits their throats and climbs inside their bodies, whatever is required. He’s a dab hand with a Bowie knife and would give the great Jim a run for his money.


There’s an occasional slide into wry self-awareness, let’s call it, or mocking parody if you prefer, as, for example, when Huston’s Madame Louise tells Brosnan’s Gideon that “a man’s gotta do what a man’s gotta do”.


Visually the film makes a strong impression. John Toll’s photography is striking. He’d worked as a camera operator on Tom Horn and had been the Oscared cinematographer of Legends of the Fall. He had wonderful Death Valley, Oregon and New Mexico locations to work with and these feature largely in the story. Oaters are usually ‘cold’ Westerns or ‘hot’ ones, set in the frozen Rockies with snow and pine trees or in arid, baking deserts with buttes or cacti. This Western combines both, throwing in a few lush green hills in between. It’s good.


The film came out (in the USA anyway) in 2007, a good year for Westerns, and it had stiff competition. That was the year of both the excellent remake of 3:10 to Yuma and the magnificent, moody The Assassination of Jesse James by the Coward Robert Ford. Seraphim Falls is not on that level but it is, as it is described on the DVD box (correctly, for once), “a tough, gritty and exciting chase thriller.”