Rails into Laramie is a predictable B-Western but is a lot of fun. Directed by experienced Jesse Hibbs (assistant director on Winchester ’73 and director of Ride Clear of Diablo, both Dan Duryea pictures) and written by good old DD Beauchamp (who wrote a Dan Duryea film River Lady, the 1953 Law and Order, The Man From The Alamo, Ride Clear of Diablo and many, many more), and with a decent Universal budget, it had a fair bit going for it. 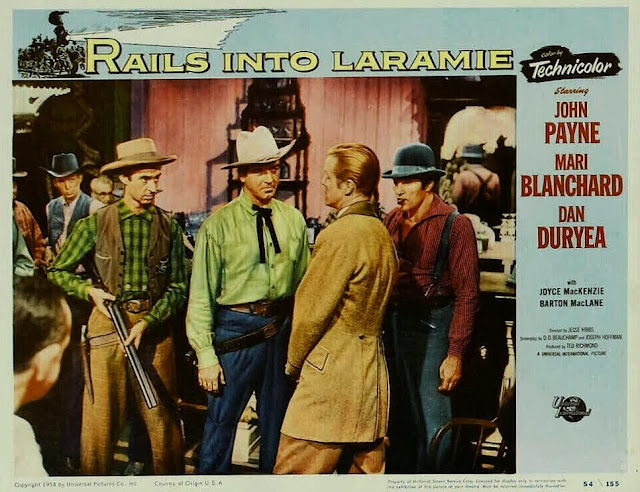 Former pals face off
And of course it had Dan Duryea as the villain Jim Shanessy. It was already Dan’s seventh oater and the public knew him by now as a rogue. He plays a crooked frock-coated saloon keeper who ‘owns’ the town of Laramie, Wyoming Territory, 1869, as the railroad arrives. The Army details a tough sergeant to act as temporary marshal, Jeff Harder, to clean up the town, which, naturally, he duly does. This marshal is played by John Payne. Three years later Payne was to write, produce and act in the TV series The Restless Gun but he had already done six feature B-Westerns before Rails into Laramie. He was a 1950s beefcake type, often filmed with his shirt off, and isn’t the first name you think of when discussing 50s Westerns, even B ones, but still he was competent.


Shanessy and Harder go back but their former friendship won’t get in the way of Jeff running his old pal outa town. Jeff’s old flame Helen (Joyce Mackenzie, Terry in Broken Arrow) has now married Shanessy so there’s a bit of ambiguity there, and he also falls for Shanessy’s saloon partner Lou (good old Mari Blanchard – six B-Westerns and a bit part in McLintock!).


Lee Van Cleef, suitably unshaven, is Duryea’s gunslinger-henchman, so that’s good. Barton MacLane is one of the pusillanimous townsmen. 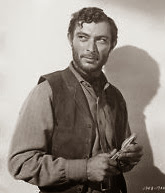 Henchperson
The plot rattles along at an excellent pace. There are two trains, which don’t quite have a Denver & Rio Grande style head-on collision (the budget wasn't that big) but come close. 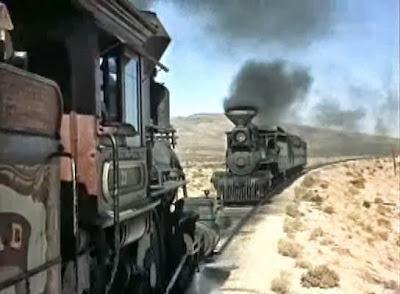 Great stuff
The plot has a Union Pacificky tinge to it and owes more than a little to Ernest Haycox's The Troubleshooter.

There’s an interesting little bit where Dan is finally found guilty by an all-woman jury. Wyoming was of course the first state to allow women the vote and to serve as jurors. The first territorial legislature of the Wyoming Territory granted women suffrage in 1869. Whether a twelve-woman jury was sworn in that year to try Dan Duryea is another matter but at least it was vaguely historically accurate! 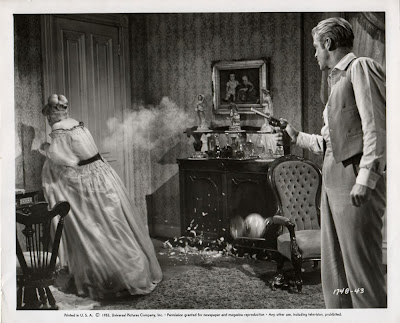 You can tell he's not a gent. Shooting a lady in the back is not considered polite.
Dan could of course be totally over the top but in this one, while clearly enjoying himself as the villainous dandy, he keeps something in reserve and the movie benefits.


All in all it’s a good little color B, definitely worth a look.

Later the same year, Payne and Duryea got back together for another Western, this time for RKO, Silver Lode.