It was amazing how quickly after the showing of the first effective narrative Western (The Great Train Robbery in 1903) parodies appeared.

Of course by 1918 the famous William S Hart had already appeared in 38 Westerns, including The Return of Draw Egan (1916), which has a plot very similar to that of Out West: tough stranger comes into town, cleans up the place with his guns and gets the girl. So they had something to parody.


Out West is an 18-minute one-reeler in which Roscoe Fatty Arbuckle lampoons what must have already been Western movie clichés. Thrown off a train, Fatty becomes bar tender in a saloon after demonstrating to the owner with his twenty-shooters that no bad guy or drunk will stand a chance. 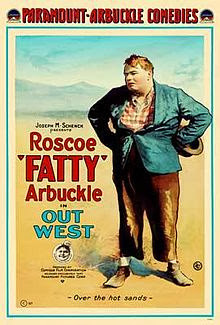 Already a parody in 1918
The good news is that Buster Keaton is the frock-coated saloon owner, and Arbuckle’s nephew Al St John is the bad guy, Wild Bill Hickup. Keaton we all know, of course, and his Go West of 1925 is one of the greatest comedy Westerns of all time. Al St John, though, may only be known to Keystone Cops fans or lovers of Buster Crabbe and Lash La Rue programmers, where he played the whiskered sidekick. He was still appearing in Westerns in 1952 (The Black Lash and Frontier Phantom). Out West was his first. 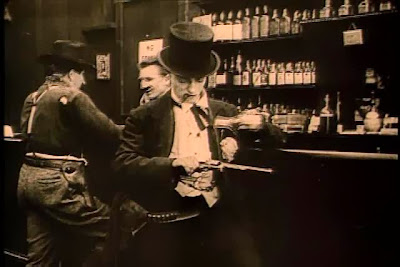 Buster oils his Colt
There’s a card sharp who slips the ace of spades into his hand. Buster notices and oils his Colt with brandy, ready for the fray. He has a useful trap door in the saloon floor for disposing of dead gamblers.


Meanwhile, Fatty is on a train, though without a ticket. He has his ample posterior punctured with bullets (some fired by Buster Keaton’s dad Joe) and is thrown off in the desert, where his a.p. is again punctured, this time by Indian arrows. Arbuckle is surprisingly agile and athletic for such a fat man. I love the way he casually lights a match by letting the passing train scrape it. 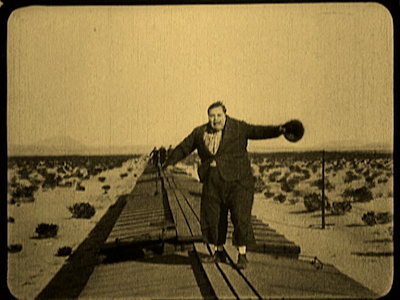 Athletic fat man does his own stunts
Black-hearted Bill Hickup, in a curious brimless hat, holds up the Last Chance Saloon with his Mexican henchpersons. When he shouts “Hands up!” the hands on the clock obediently rise to five to one. The barman attempts resistance but Bill shoots him and he ends up in the hole in the floor. Now Fatty appears, grabs two pistols and proceeds to make Wild Bill seem like an amateur. After clearing out the bad guys, Fatty takes the late bartender’s place.

Fatty is hired
Then there’s a scene doubtless thought to be hilarious in 1918 when the customers in the bar shoot at the feet of a Negro to make him dance. He is saved by a Salvation Army lass (Alice Lake) who shames them into desisting.


A “lonesome cowboy” rides his horse into the saloon. Bill gets his revenge by lassoing the Sally Army girl and a general shoot-out follows with mucho gunsmoke. Buster deceives a bandit by leaving his hat to be shot at while he sneaks round to get the drop on his attacker. Already a recognizable cliché in 1918! Fatty rescues Alice by incapacitating badman Bill by tickling him. Together, Fatty and Alice then push Bill’s cabin over a cliff with Bill in it. The End.