Any chance to see Anthony Quinn in a Western is worth taking. To see him in anything, come to that. When he got the chance to lead, or at least play one of the leading parts, he was never less than superb. He did 19 Westerns, from 1936 to 1973, not a huge number compared to some, but he was excellent in all of them. One might highlight as particularly fine his performances in The Ox-Bow Incident, Viva Zapata!, The Ride Back, Warlock and Last Train from Gun Hill. 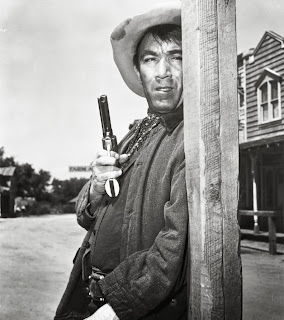 Quinn: formidable
Man from Del Rio is at first sight just another black & white mid-50s B-Western. It starts with a cliché: the Quinn character, David Robles, shoots ‘the fastest gun alive’ in a duel on the saloon steps and no one bats an eyelid, except to congratulate him. But very soon the movie develops into a far more interesting affair with complex characters and themes.


The female lead was Quinn’s fellow Mexican and friend Katy Jurado in a characteristically wonderful performance as the doctor’s nurse who at first spurns Robles as a gun-man, like her first husband, who left her a widow, but she gradually comes round to care for him. Robles is a scruffy gunfighter-turned-sheriff who is hired to clean up the town but is then ostracized by the hypocritical townsfolk. Jurado has a great line about using a snake to kill rats but then you are left with a deadly snake. 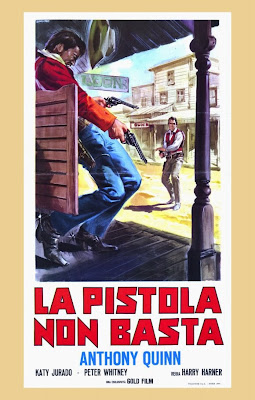 Not just pulp
Quinn's Robles is gauche, inexperienced, almost puzzled, yet very powerful and very effective. He thinks that as sheriff, in his new clothes, he will be respected by the townsfolk. He is soon disabused. Frozen out of the community dance, he ends up on the street with the town drunk and then tipsily dancing with himself. It’s a moving moment. The Quinn/Jurado relationship is handled with great skill. They are the only Mexicans in the white town of Mesa (supposed to be a Dodge/Ellsworth kind of cattle town) and the snobbish treatment of Robles has racial undertones too.


There is some good support acting, notably from Western veteran Douglas Fowley, who did 96 Westerns between 1934 and 1982, as the cynical Doc Adams (he had to be named Adams and indeed director Harry Horner had done an episode of Gunsmoke earlier that year), and Whit Bissell as the town drunk-factotum Breezy Morgan (55 Westerns, 1947 – 1978). I love the Doc’s sign. It advertises his services - Physician, Dentist, Veterinary and, in case all the above fail, Undertaker. Guinn ‘Big Boy’ Williams (uncredited) leads the gunmen thugs in the saloon. 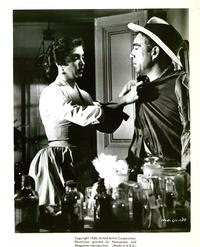 Jurado and Quinn: both superb
Only Peter Whitney (TV Western stalwart) as megalomaniac villain Ed Bannister is miscast. He is supposed to be a former lightning-fast gunslinger himself but doesn’t convince at all as that. He has grandiose schemes to own the town but he never satisfactorily explains what his plans are.


The director was an interesting fellow, Harry Horner, who had been born in Bohemia, went to university in Vienna and had worked in many different capacities in theater, Broadway shows and movies. It was his only Western feature film but he was famous for entering deeply into the background of a movie to get a better understanding.


The classic final Main Street showdown (scheduled for 10 in the morning, and the clock on the wall ticks inexorably in a High Noony way) again has an unusual twist.


No one would claim that (The) Man from Del Rio is a great Western – it’s not High Noon - but Quinn’s complex characterization and Jurado’s sensitive strength make it well above the average.