Jeff Arnold and Riders of the Range


British boys and Billy the Kid

British readers of a certain vintage may have wondered if the writer of this blog is related to the famous Jeff Arnold, Texas Ranger, hero of Riders of the Range, a BBC radio serial of the late 1940s and early 50s, and then of the British boys’ comic Eagle.


Well, no, unfortunately, I can claim no blood relationship. Sad but true. 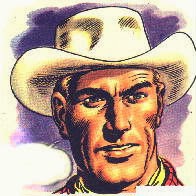 The other Jeff Arnold
But I have been contacted by Steve Winders, who writes articles for the Eagle fan magazine Eagle Times, and Steve gives me the lowdown on Riders of the Range.


He says that the radio serial “combined music and drama to tell stories about the cowboys of the 6T6 outfit from Pecos, Texas, aiming to present an authentic picture of the wild west, with the stories being set against a background of real events, including the opening up of the Chisolm [sic] Trail and the story of Billy the Kid.” Sadly, all the episodes were performed live and not recorded so we cannot listen to them now, though the scripts survive.


The hero of the series was the Texas Ranger Jeff Arnold, played by the Canadian singer and actor Paul Carpenter, chosen for the role, apparently, because he sounded like John Wayne.


The serial was both written and produced by Charles Chilton (1917 – 2013) and in 1950 Chilton was approached by Marcus Morris, owner of Eagle, to make Riders of the Range a weekly feature of the comic. Morris even paid for Chilton to make his first visit to the American West. The strip was beautifully drawn by Frank Humphris (1911 – 1993) and became very popular. It lasted till 1962. 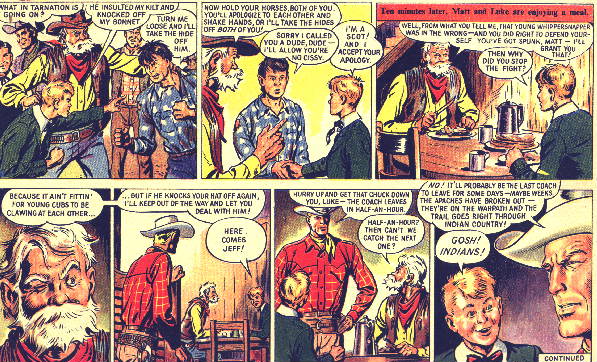 British readers (the stats page of this blog tell me that there are quite a few) may well remember that Jeff and his old-timer sidekick Luke.


Thanks, Steve, for the information, and happy trails!
More on Eagle: http://eagle-times.blogspot.fr/
Posted by Jeff Arnold's West at 8:39 AM