aka Si può fare…amigo, Bulldozer is back amigo, The Big and the Bad, etc. etc. [yawn]

Why does such drivel have to be so long? Surely an hour would be enough to have to sit through such junk. Yet even if you fast forward the moronic fights to avoid listening to the stupid sound effects and hasten the end, it still seems to go on for ever and a day. Actually, Germans were the luckiest. In their country the runtime was ‘only’ 85 minutes. In Spain they had to suffer an extra quarter of an hour while the poor Italians had no less than one hour 39 minutes to endure.


Even if you are a fan of spaghetti westerns, it is difficult to see what the appeal could possibly be in this cretinous farrago. 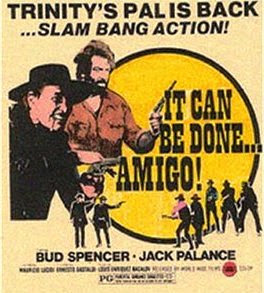 'Slam bang action' is actually a lie. It's boring.
It ‘stars’ Bud Spencer, who seems tired and bored. Jack Palance does nothing except grin vapidly and count his paychecks. There’s an unattractive woman (Dany Saval) and a tiresome nine-year-old kid (Renato Cestiè). 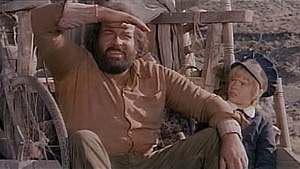 Bad actor and stupid kid
The dialogue, by Rafael Azcona and others, has the usual chimp-on-valium sparkle and wit. The ‘music’ is abysmal and uncredited (who would take ‘credit’ for it?) Visually, this is cheap and nasty with lousy photography by Aldo Tonti of the usual Almerian characterless desert and knock-off western towns (they have the nerve to call one Silverton. Silverton, Colorado is a great town and well worth a visit).


The total budget for this movie was probably forty lire. 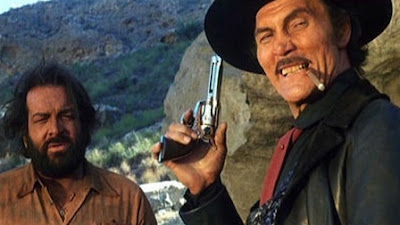 Jack smiling. It's the last day of the shoot and payday.
The utterly unfunny ‘comedy’ aspects aren’t the worst, though. It’s the fact that the movie is so slow and boring. It moves along at the pace of a dead horse and you just wish they would get on with it and get the story over with. The director (Maurizio Lucidi) should really have been struck off, unfrocked and disbarred from the Guild of Western Directors (Third Class, Spaghetti).


Readers of this website will know that I don’t care for so-called spaghetti westerns much – or indeed even at all - but I do try to be fair and have even been known to give three revolvers to one (A Bullet for the General). However, in this particular case there are no saving graces at all. Why would anyone actually pay to watch this? I only did because it was in a boxed set of such films and Jack Palance was in it but I promise you, nothing will induce me ever to put it in the DVD player again. I’m not a masochist.