If you are used to Barbara Stanwyck as the impressive matriarch figure Victoria Barkley of the 1960s 112-episode TV series The Big Valley, or have seen her as bossy baroness Jessica Drummond in the rather trashy Forty Guns (Fox, 1957) or as Edward G Robinson’s evil rancher wife in The Violent Men (Columbia, 1955), you might expect that in a film titled Cattle Queen of Montana, she would be a rich rancher with thousands of head and a great empire under her command. But no, this is a minor A-picture which is all about how she and her husband drove a herd to Montana all the way from Texas, Lonesome Dove style, but then there’s a cry of “Stampede!” (there always was) and she’s left with no husband, no cows and only sidekick Nat (Chubby Johnson).


True, it was an age when all Hollywood stars had to climb into the saddle at one time or another, even if they were allergic to horses, but la Stanwyck did rather get the taste for it. Apart from the above named oaters and some episodes of Rawhide, Wagon Train and Zane Grey Theatre, she was in ten feature Westerns. She was Annie Oakley in her late 20s (1935) and of course starred as chirpy Mollie Monahan in the Cecil B DeMille-directed fun farrago Union Pacific, her second Western. She built up a rep as a tough, gun-totin’ Western gal in pants. If that’s your thing. I don't care for her, though. 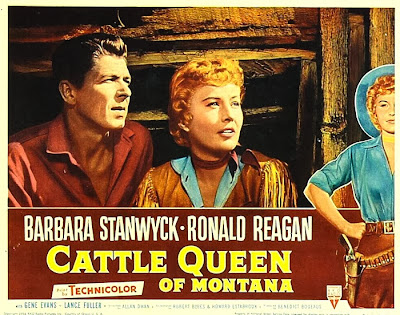 Cattle Queen was a Bogeaus/Dwan production. Producer Benedict Bogeaus and vet director Allan Dwan did a few Westerns together, all a bit average, it must be said. See, for example, Silver Lode. Dwan directed no fewer than 171 Westerns, from Bud Nevins, Bad Man in 1911 to The Restless Breed in 1957. The 1939 Frontier Marshal with Randolph Scott as the first screen Wyatt Earp was about his best.


Starring opposite Ms. Stanwyck was Ronald Reagan, posing (quite well, actually) as a gunslinger but in reality working for the US Government, as he was indeed to do 1981 - 89. I’m afraid he was pretty wooden in Westerns. I pass no judgment of how he was in the White House, and leave that to you. 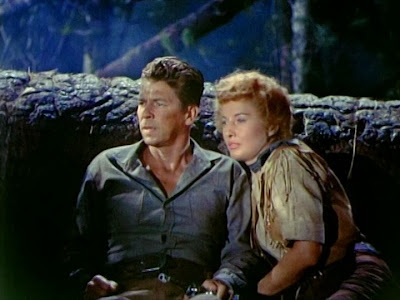 Don't worry, Barbara, I'll get you out of this
Appropriately for a film of this title, there’s some lovely location color photography shot in the Glacier National Park, MT. It was done by John Alton (eight B-Westerns). It is also true, though, that there is a fair bit shot in California and in studios, and with Ms. Stanwyck in front of a back-projection screen. Oh well. 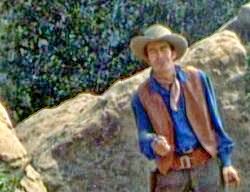 Jack's the henchman
Some good news: apart from the great Chubby as loyal flunky Nat, we also have Jack Elam as (you will not be amazed to hear) henchman of the evil rancher opposed to Barbara. He survives into the last reel before being shot, which is pretty good for Jack. Morris Ankrum and Myron Healey are there too, and Western stalwart Paul Birch also, as Colonel Carrington.

Col. Carrington was actually an interesting fellow: Henry Beebee Carrington (1824 – 1912) was a lawyer, professor, prolific author, and an officer in the US Army during the Civil War and in the West during Red Cloud’s War. A noted engineer, he constructed a series of forts to protect the Bozeman Trail. Unfortunately he got whipped by Red Cloud. Well, you can’t win ‘em all. 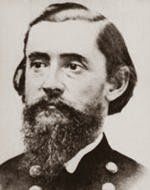 Col. HB Carrington
The Blackfoot Indians are not well done. They talk Ug-speak of the “Me want firewater” kind. Anthony Caruso (63 Westerns, nearly always an Indian, Mexican or heavy, always amusing) is the bad Indian and Lance Fuller (bland TV/B-Western actor) is the good one, who is named Colorados. Colorados’s dad is Chief Red Lance. I don’t know who the (uncredited) actor was but he sounds distinctly German, which is odd for a Blackfoot.

Many Westerns are loosely called cowboys-and-Indians stories but they rarely are. This one actually is, though. It's about drovers and their relations with the Blackfoot.


The whole things is rather predictable and unremarkable, I fear. Robert Mitchum was supposed to have taken the Reagan part but read the script and decided to avoid it. You might do well to follow his example, unless you are a hopeless Western fan. 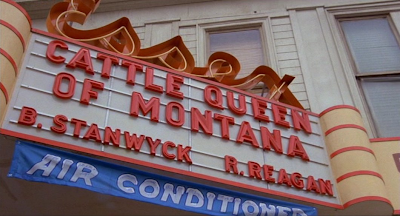