When I started this blog I never thought I would be reviewing a Western called Joheunnom nabbeunnom isanghannom. But there we are.
Joheunnom nabbeunnom isanghannom, otherwise known as The Good, The Bad, The Weird, is a Korean spaghetti western set in 1930s Manchuria. Clearly it’s a remake of or homage to the third of Sergio Leone’s Dollars trilogy. Well, if Leone can borrow an East Asian plot like Yojimbo, the Koreans can borrow one right back. 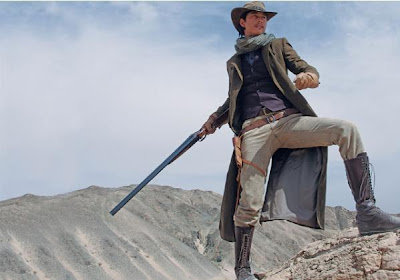 The good (I think)
It was directed and co-written by Ji-woon Kin, clearly a Leone fan. It had a fat Korean budget of $17m and the production values are more big-studio Hollywood than Cinecittà on a shoestring. There are special FX, a train and a cast of lots. 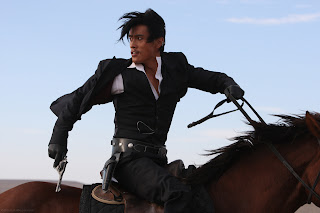 The bad (probably)
As with its titular model, it is not clear which of the three principal characters is good and which bad. However, they are all weird. 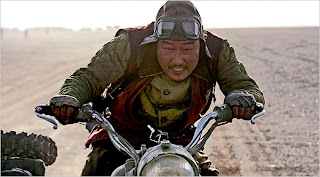 The weird (certainly)
One of them looks more Western than the others. He carries a pistol in a holster, wears a cowboy hat and is a dead shot with a Winchester. One wears a slick Armani suit and the other seems to be a Korean peasant with a leather flying helmet. Eli Wallach on a motor cycle.


It has lots of violence and gore (censored on TV) and mucho action of all kinds. Trains are held up, the Japanese army fires artillery, there is much shooting in markets, and so on.


It’s a treasure-hunt plot. They try to kill each other to get the map. There’s something about the mafia too. Everyone wants the treasure. The three main characters arrive at the end of the film and have a three-way shoot-out, more triangular than Leone-circular, and are all left shot up and prostrate. They all appear to be dead. But…

The three-way shoot-out, Manchurian style
I don’t know where it was filmed but the desert locations render homage to Leone by looking like Almeria, Spain.


The whole thing is a big, spectacular, fast-moving nutty cartoon. You notice the choreography of the action. It’s too long but very good if you like that kind of thing. 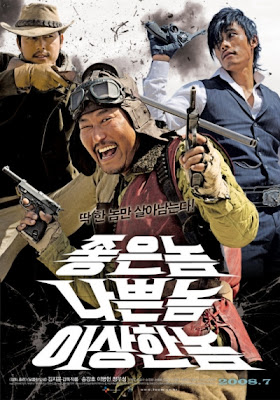 It is actually quite fun
If Italian cowboy films are called spaghetti westerns and Spanish ones are paella westerns and Israeli ones matzo-ball westerns, what do we call Korean ones? The director, according to IMDb, says he'd like this to be called a "kimchee western", after the Korean food made with fermented cabbages. He says he thinks the plot and film are spicy and vibrant, like the Korean culture and people. Fermented cabbage westerns?
Alright then.