As convention-ridden as a Japanese Noh play

The penultimate Lone Star B-Western of the 30s starring John Wayne was (for no apparent reason) called The Dawn Rider. The title was considered good, for there were Riders of the Dawn in 1920, 1937 and 1945 and Dawn Rider appeared again in 2012. 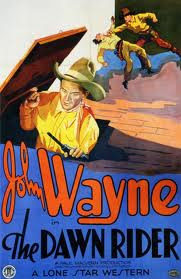 They loved secret compartments and hidey-holes
It was very much the Lone Star/Duke mixture as before. This was one again directed by RN Bradbury. Wayne is John Mason this time, and his father is killed, so he sets out to get the bad guys that did it. How we love that revenge-the-dead-daddy plot. He goes about the place winning friends and admirers with his courtly manners and charming smile despite his black hat (one character says, “Who can help liking a guy like that?”).


Wayne always leaps athletically onto his horse and displays his impressive roundhouse punch (actually, it seemed to be the only one he had).


There’s a high-noon moment, although the saloon clock ticks to the crucial hour of 4 pm so that spoils it a bit.


The heroine is Marion Burns again (how many times did Wayne have to woo and win her?). Here she is Alice, always called ‘Aluss’ by John. 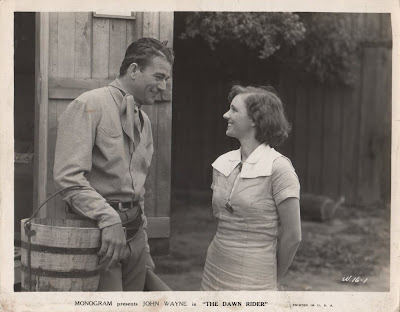 Romancing Marion. Again.
This time Yakima is the saloon owner. He wasn’t too busy with stunts, sadly, so had the time to run the saloon and head up the gang. 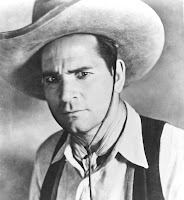 The great Yak
Earl Dwire’s back (my hero), as Pete the Expressman. Archie Stout photographed it, competently, as ever.


These were absolutely classic 1930s Westerns, as convention-ridden as a Japanese Noh play. The acting was always awful; the characters recited their lines loudly in a monotone. The hero wins out against the bad guys and gets the girl. There’s loads of action and galloping and shooting (at least every ten minutes). Some humor, usually a song. It’s as though they put all the ingredients in a (ten-gallon) hat, shook them all about and came up with a Western. 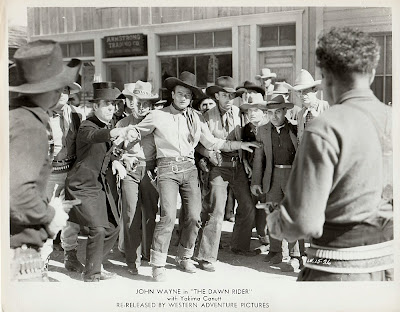 Posed, nous?
Some reviewers have had the nerve to be dismissive of this Western and call it formulaic. Fools. All these movies are fun and full of energy, and The Dawn Rider is no exception.