There’s a whole website devoted to this rather tiresome Western and if you like that kind of thing you can while away some of your time there. There are also very long, vapid and meandering commentaries on the special features part of the DVD but I couldn’t get through to the end of those, they were so boring. The film itself is, mercifully, reasonably short, at 88 minutes. It’s best described as a post-spaghetti. 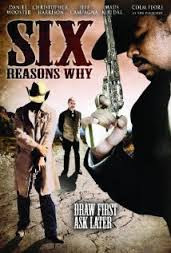 Indie more than Indian Western
Set in some weird place and post-apocalyptic or alternative time, it starts with credits that are a homage to Sergio Leone, all bright colors and cartoon/silhouettes. There’s a Leone cannon and a deliberate reference to the poor English of some spaghetti credits: “A film of the Campagna brothers”. The music is also spaghetti-esque, a whistly/guitar/harmonica riff, later developing into irritating sub-Mexican trumpet. Overloud gunshots of course. Occasionally an intrusive rock song is heard.


The whole film is pretty home-made and full marks to the Canadian Campagna brothers for their efforts. I suppose they are of Italian extraction, judging by their name (and appearance), and grew up on spaghetti (westerns). In fact they have tried to break the record for the number of times their surname appears in the credits (they have bested even the van Peebles clan in Posse in this regard). I don’t think the hairdresser’s driver's assistant was a Campagna but s/he could have been. 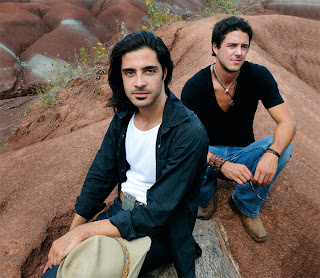 Campagna Bros
The acting is, I’m afraid, rather ho-hum. Dane Mads Koudal seems to have been in a fair few movies but Christopher Harrison and Dan Wooster are relatively new. Two Campagnas inevitably figure. Colm Feore (Sherman the same year in Bury My Heart at Wounded Knee) is a preacher. The barman is supposed to be a “limey” but isn’t. There’s a big horse, a grey (it’s a different nag in flashback, which is confusing). In fact there are huge numbers of flashbacks as well as fashionable time-lapse photography. In one of the flashbacks someone impersonates Sharon Stone.


Visually it’s quite attractive and they managed to find some bits of Canada to stand in as desert badlands, which was quite an achievement.


The scene where Harrison beats a lawman about the face with his pistol butt is pretty grisly and not for the squeamish. He just goes on beating for ever.


The meaning of the title isn’t clear but may refer to the six bullets in a revolver.


The costumes are poor. One character walks around the desert in a Columbo raincoat. C Harrison wears a penguin suit. Perhaps the idea was ‘other time, other place’ but it just looks silly. One character wears a poncho, of course. One is called ‘Johnny Guitar.’ The characters are men with no name. There are close-ups and long sequences of the men gazing at each other. So there are spag references there alright, and that’s OK, I guess, especially if you like spaghetti.


But all in all, the film comes across as amateurish, I’m afraid. And, like the spaghettis it lauds, it’s not so much a Western as about the Western.