No return? Probably just as well

River of No Return was Otto Preminger’s only Western. It featured top Hollywood stars Robert Mitchum and Marilyn Monroe and had dramatic Canadian Rockies locations in the new CinemaScope. It should have been a wow, and indeed it did well at the box office. It is in fact quite good, in a way. But quite good doesn’t make great. 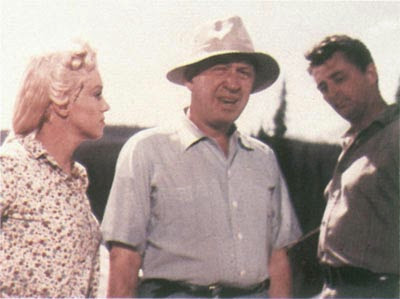 Monroe, Preminger, Mitchum. Not happy bunnies.
It’s a raft story, as Bob ‘n’ Marilyn battle rapids, mountain lions, Indians and badmen, sometimes all on the same afternoon, on their way downriver from their cabin burnt by Indians to the safety of Council City.


The story opens (after a regrettable ballad) with farmer Mitchum arriving in a tent-city gold-mining camp defined by a minister as Sodom and Gomorrah, both. Bob is searching for his nine-year-old son Mark (Tommy Rettig, the Lassie boy). Mitch has been away. He finds the lad being cared for, lucky boy, by a saloon gal, Marilyn of course, who sings a good number of songs – Changing Hands, I’m Gonna File My Claim, Down In the Meadow (twice) and, naturally, River of No Return. 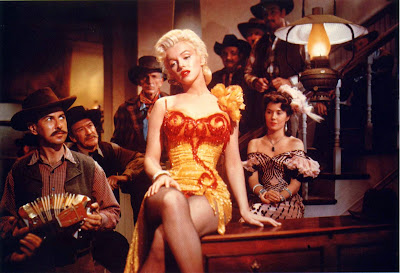 The squeezebox player seems distracted
It turns out that Mitch has been ‘away’ because he was in prison for shooting a man in the back. He plunges in his son’s estimation. Shooting someone in the back is not considered quite the done thing in Westerns. However, the ending redresses that problem neatly, if brutally.


Mitchum is good – he always was, even when on auto-pilot. Monroe is competent, if absurdly dressed in a 1950s take on the 1870s. To many people’s surprise, on the set Mitchum did not make an attempt on Monroe’s virtue. He found her vulnerable and childlike, and not his type. Of course in the film they are made for each other and they and the boy will form an ideal family, you can tell.


Rory Calhoun, in probably his most celebrated role and in his final Fox Western, is Marilyn’s ex, a ne’er-do-well gambler who abandoned her but now that Bob is interested, he wants her back. Rory liked rivers: he had done Massacre River and Powder River before this River. In fact 37.5% of his Westerns to date had been about rivers. I tell you this on a need-to-know basis, of course. He'd been fourth-billed in Marilyn's epic of the previous year, How to Marry a Millionaire, so they got on. In River of No Return, though, he only got 16 minutes of screen time so we can't really consider this a Calhoun Western.

Calhoun as ne'er-do-well gambler
Once the cast and crew were assembled in Banff, the drama began to unfold. Marilyn could not cope with Preminger’s Hitlerite screaming. Paul Helmick, the assistant director, said that Preminger “was a complete pain in the ass. Vicious, impatient, very crude to people, especially to women.” In no time at all Preminger and Monroe weren’t speaking to each other and communication was only through Mitchum, who was hitting the bottle. Another major source of unpleasantness was the ubiquitous presence of Marilyn’s “coach”, the odious, smelly and fake Natahsha Lytess. She insisted that Monroe e-nun-ci-ate all her syllables distinctly, advice which Marilyn took so much to heart that her performance became unfilmable. Mitchum thought she looked like a fish. 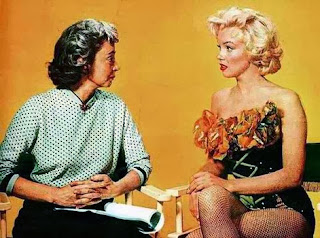 Lytess also cruelly told the boy Rettig that he was just at the age when child actors lost their talent: he froze on the set and cried before takes. 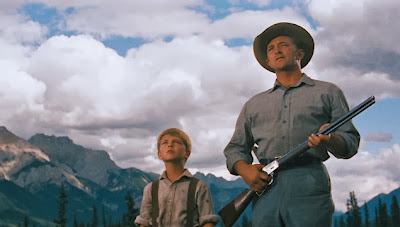 Father and son
Meanwhile, the second unit director and stunt people were making the film. Such exciting action as unfolds is to the credit of these brave professionals (one of the Oz munchkins dressed in corduroy stood in for Rettig). Later, the stars went back to Hollywood where they stood on a tethered raft in front of a back-projection screen and studio crew threw buckets of water at them and shot arrows into the timbers at their feet. Preminger’s contract expired just before the end and he departed for Europe without doing any post-production, to everyone’s relief. 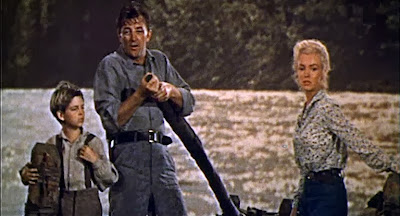 Back-projection
Just as the cast were finishing up in Banff, a Universal team arrived to make Saskatchewan on the same locations. The reclusive Alan Ladd (in a role turned down by Mitchum) buried himself in the hotel while certain other (female) members of the cast made a beeline for Bob.


The music of River is rather overwrought and the film is too talky. There are one or two dodgy lines in the Frank Fenton screenplay of the “He can run but he can’t hide” kind.  Both Mitchum and Monroe despised the script. But there is a Deliverance/Rooster Cogburn vibe in a way, though Marilyn is slightly more attractive than Katharine Hepburn in her late sixties. Or Burt Reynolds.


At one point the attacking Indians snatch at Marilyn and her blouse comes away completely. I wonder why Preminger did that. At another point she is soaked and is dressed only in a blanket while Mitchum has to massage her dry.

The pace is too slow, generally.


It’s an OK Western, thanks to Mitchum, but you can tell that Preminger didn’t understand the genre and it was doubtless a good thing that he only made one.