I personally don’t much care for tricorn-and-sword dramas, nor do I think they are Westerns, but Mohawk, a lively Fox offering of 1956, was about as Western as the genre got. 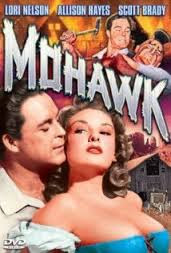 But Lori doesn't get a look in
Scott Brady was one of the three enfants terribles Tierney brothers, and was often in trouble for drink or drugs. He looks a bit like Marlon Brando, only handsomer and he was a rather less mannered actor. Here he is an artist out on the frontier, painting landscapes (and innkeepers’ daughters) and sympathizing with the Iroquois. His fiancée from Boston (Lori Nelson) arrives unexpectedly with a Wodehousian Aunt Agatha (Vera Vague) which is a bit awkward as he has fallen in love with Onida (Rita Gam) the daughter of big chief Ted de Corsia. It’s not surprising because Onida wears a skin-tight mini-tunic and emerges from a swim looking a bit like Raquel in One Million Years BC. 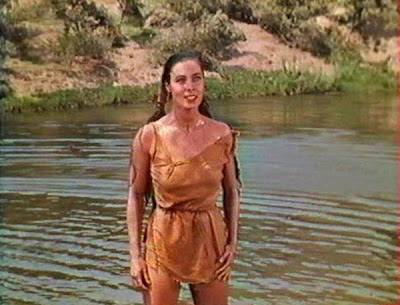 Rita Gam as Onida. The model for Raquel's BC flick?
The evil Butler (John Hoyt) incites war between the settlers and the Indians as he wants the valley for himself (or something); he is excellently sneaky and mean. Neville Brand is an Indian who is all for war. Good old Neville. He was certainly a better actor than a bear would have been. Mae Clark is the bossy chief’s wife. Old Ted has to listen to her or he’s in trouble. 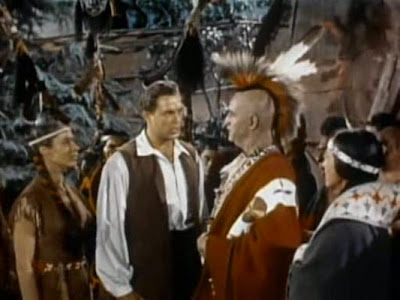 Noble artist Scott Brady talks to Mohawk chief Ted de Corsia (the latter told what to say by Mae Clark as Mrs. Chief, right)
There’s a great war dance by Chabon Jadi. Wish I could dance like that. The Indians sing like 1950s Hollywood angels and at one point chant hi-ho, as if in Snow White. The Iroquois attack the fort rather well. There’s a song in the inn, moving music, could it be by Schubert? Is it a Mahler liede? It’s called Love plays the strings of my banjo. 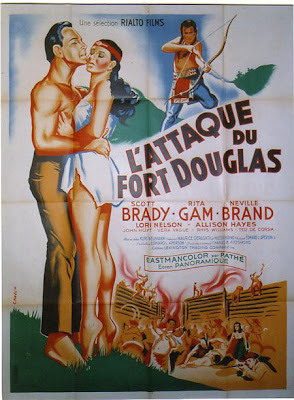