Yet another low spaghetti

Don’t you get tired of these so-called ‘comedy’ Westerns with Terence Hill in them? They aren’t in the least funny unless you have a mental age lower than your boot size, they contribute nothing to the genre and they are far too talky (which might be acceptable if the screenplay were any good). Probably the worst sin of all, they are boring.


By 1972 the ‘They called him…’ titles were wearing thin (but then so was the whole spaghetti genre). The English-language title presumably referred to the  movie Man of the West, in which case Signor Barboni, the writer and director (billed for some reason as EB Clucher) seems to be suggesting that he was like Anthony Mann and Terence Hill was trying for a Gary Cooper performance, a notion as laughable as it is insulting. 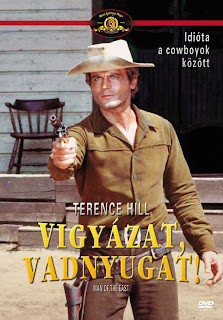 Perhaps it's better in Hungarian
The German title gives a clearer idea of the ‘plot’: Ein Gentleman im wilden Westen. But if you think Mr. Hill isn’t up to impersonating Gary Cooper, you should see him as an ‘English gentleman’. Hill (a Venetian named Mario Girotti) was quite good at low Italian comedy but was totally awful in all Westerns.


He is supported (but really undermined) by 50s B-movie bit-part player Gregory Walcott, 70s bit-part player Dominic Barto and, believe it or not, Harry Carey Jr. as ‘Holy Joe’, the gun-toting parson. They all, even with the dreadful script, show Hill up and out-act him by miles. 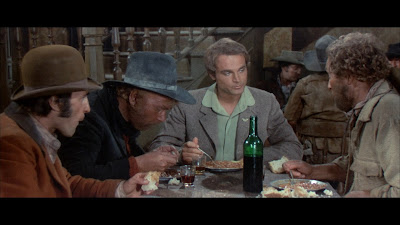 Dobie, what the hell are you doing? Making a buck, I guess.
The love interest is provided by Yanti Somer. She doesn’t.


There’s the usual ‘comic’ saloon brawl (the sort Hill had perfected with Bud Spencer) and that is typical: there is nothing whatever original or amusing or interesting about the movie. It’s just a straight commercial exploitation job.


It was filmed in Yugoslavia and there is a shot or two of a ‘Rio Grande’ train trundling along a mountain track but the train plays no part at all in the story and it’s not clear why it is in the film. Probably because it was there.


All in all this is yet another low spaghetti western of no merit whatsoever.