The Eagles song Desperado first appeared on the album of the same name in 1973 and became a standard rock take on the West. In 1987 it seemed to inspire a TV movie. At any rate the song opened and closed the film, over the titles. It isn’t quite clear from the lyrics what it has to do with the story of the film but the movie’s about a desperado anyway so that’s probably enough. 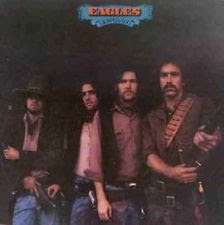 Des-perado...
The movie Desperado is, frankly, a fairly standard, not to say pedestrian TV Western and it was in little danger of becoming a classic. Alex McArthur plays Duell McCall, a drifter who falls for Nora (Lise Cutter), daughter of a ranch owner (Donald Moffat) who is being harassed by hands of ‘The Company’ who want his land. Duell joins father and daughter in their fight for right. Both protagonists are rather 80s-looking in their hair styles and so on but there we go. They’re alright, I guess.

Alex McArthur as Duell McCall
There are often evil Eastern corporate interests behind any skullduggery in a Western, usually an unscrupulous railroad company. This one might be a railroad, it isn’t spelled out, but they certainly do the unscrupulous part.


The Company’s ‘police chief’ is played by David Warner. Warner was so-so as the half-crazed ‘preacher’ in The Ballad of Cable Hogue but is better advised here by playing it as a straight tea-drinking Englishman (pining for Curzon Street) and not attempting an American accent. He is nasty and heinous enough so that we give half a cheer when he finally gets his just desserts (no spoiler there, I think).


His sadistic lieutenant is Mr. Bede, played by Yaphet Kotto, who looks odd in a Western: he seemed more at home as a tough cop.


Three well-known stars make an appearance, Gladys Knight (sans Pips) as a cello-playing brothel madam, Robert Vaughn (looking sadly overweight and tired) as a bought-and-paid-for sheriff and a white-bearded Pernell Roberts, very good as always, as the US marshal with a shotgun. 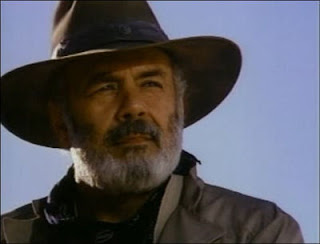 US Marshal Pernell Roberts
The opening shots are of the Mittens in Monument Valley. At one point the heroine gives the hero, who doesn’t read much, a volume of poetry, saying that “poets don’t use many words.” Unfortunately, she has chosen a volume of Tennyson, that most prolix of poets. What the hero made of it, heaven knows. Anyway, it finishes in the flames.


There’s a sub-Thomas Crown Affair and rather unerotic game of chess and when the lovers hit the hay (or it might be straw) in front of a small campfire, the flames of passion duly rise, as per the oldest of clichés.


To be fair, while most of the movie is unoriginal and predictable, it does accelerate in pace towards the end, enough to make you put off making that cup of tea.


The only really surprising thing is to learn that the great Elmore Leonard wrote it. If I hadn’t read that, I certainly would not have guessed. There is some anachronistic or odd wording. The whites call the black Bede sir, there is mention of unions and suffragettes. And, as I say, it’s all pretty hackneyed and standard stuff. Not Elmore at all. Maybe they monkeyed around with his script. They must have done.


The movie spawned four sequels, the first of which was fairly routinely entitled The Return of Desperado. None of them starred Antonio Banderas, however, in the unlikely event that you are wondering.
Don't you draw the queen of diamonds, boy
She'll beat you if she's able
You know the queen of hearts is always your best bet
Don't say you haven't been told.