Chato (Charles Bronson) is an Apache half-breed on the run because he killed a racist sheriff who threatened him. Chato is chased by a posse of hateful white men. He demonstrates his courage and knowledge of the land and outwits them. He kills them one by one and then the movie ends. 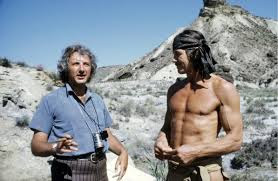 Poor director and wooden actor confer
Seen it all before? Yes. And done better. This movie was produced and directed by a Briton, Michael Winner, who had very little idea of the Western or how to make one. Witness the dreadful Lawman of the previous year. He also used a Brit to write it, Gerald Wilson, who was responsible for Lawman too, and while in Chato’s Land Mr. Wilson does make some attempt to develop the characters of the posse members, it must be said that generally he fails.


As Chato is an Apache you might expect his land to be New Mexico, Arizona or northern Mexico. However, Chato’s land is Spain. Almeria, to be precise. Mr. Winner seems to have brought with him on the plane to Spain a couple of saguaro cacti. Or perhaps he had plastic ones manufactured in Almeria. Anyway, they appear in every damn scene, in the vain hope of making the stony gray Spanish landscape look like Arizona. Wherever the posse or Chato roam, all through the desert, the same wretched cacti appear.


Mr. Winner used the same photographer and writer of the score as for Lawman, Robert Paynter and Jerry Fielding, respectively. Both are average at best. 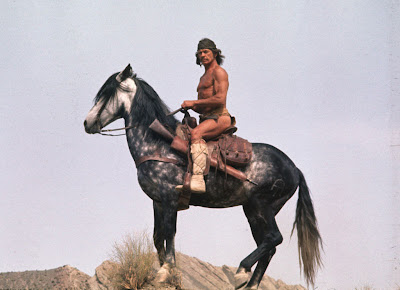 Muscular
Curiously, the ‘hero’ is very little seen and says almost nothing. He is the strong, silent type and his only role is to murder posse members serially. It is a very 2D role.  Mr. Bronson suits it. At 50, it has to be said he was very fit and in good nick. He spends much of the time scantily clad with muscles rippling. One is quite envious. This is one of no fewer than 70 Westerns that Mr. Bronson, né Buchinsky (he was billed as Buchinksy in his earlier parts) was in. He was in no danger of winning an Oscar for this role.

Jack the Great
The posse is led by an embittered ex-Confederate officer, Quincey (Jack Palance, not one of his better roles, I fear, though he does try to make the character as sympathetic as possible, not easy for the leader of a bigoted, racist lynch party). He is seconded by Josh Everette (James Whitmore, who looks exactly like Monsieur Pousse in my village). Richard Jordan is a member too. He was in Lawman and was quite good in the vastly superior Valdez is Coming, which this film apes. The movie also tries to copy Apache. 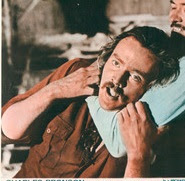 Richard Jordan in a bit of a bind
There are Simon Oakland, Ralph Waite, William Watson, Richard Basehart and a few others in the posse to bring up the numbers of Chato victims to be shot, have rattlesnakes thrown down on them and so forth.


There is only one woman and she is only there to be raped by the posse. This is a Winner hallmark.


So you see this film isn’t very good.