Admirable if too consciously didactic

Dee Brown’s worthy and weighty tome Bury My Heart at Wounded Knee: an Indian History of the American West covered the whole story (he would say tragedy) of the American Indian from the Civil War to the massacre at Wounded Knee in 1890. It caused a storm when it came out in 1970, at a time of increased American Indian activism, and though partial and passionate, was probably a necessary corrective. It is perhaps surprising that a film of it has not been made before. Maybe the canvas was thought too large, or portrayals of the plight of the American Indian become too commonplace. At any rate, HBO’s offering of 2007 is interesting and they certainly invested in it. 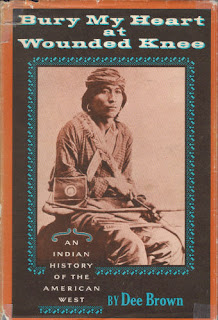 Dee Brown's best-selling book
The movie solves the problem of scope by concentrating on one tribe in one period, the 14 years from Little Big Horn in 1876 to Wounded Knee. And it concentrates on the (fictionalized) story of three people, Republican Senator Henry L Dawes (1816 – 1903), played by Aidan Quinn, Dr. Charles Eastman or Ohiyesa (1858 – 1939), played by Adam Beach (his part is very fictionalized), and his wife, the poet Elaine Goodale (1863 – 1953), played by Anna Paquin. The casting people actually chose actors who looked, judging by their photographs, very like the real people. 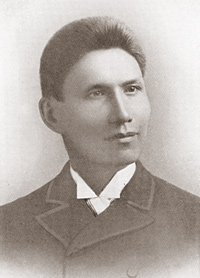 The story is by now a well known one and the judgment by Justice Blackman in 1980 of how the Sioux were treated was certainly exaggerated but was essentially true: “A more ripe and rank case of dishonorable dealings will never, in all probability, be found in history.” 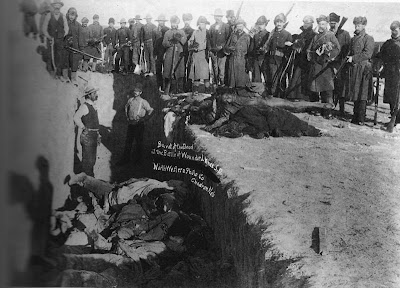 The mass grave at Wounded Knee
Wounded Knee (December 29, 1890) was the last major confrontation between the US Army and American Indians. It was a disgraceful and shameful affair, which included soldiers using rapid-fire Hotchkiss guns on tipis containing women and children.

The Hotchkiss guns used at Wounded Knee
American Horse (1840–1908), an Oglala Lakota chief, said, “…after most all of them had been killed a cry was made that all those who were not killed or wounded should come forth and they would be safe. Little boys ... came out of their places of refuge, and as soon as they came in sight a number of soldiers surrounded them and butchered them there."


Hugh McGinnis, First Battalion, Co. K, Seventh Cavalry reported that "General Nelson A. Miles who visited the scene of carnage, following a three day blizzard, estimated that around 300 snow shrouded forms were strewn over the countryside. He also discovered to his horror that helpless children and women with babes in their arms had been chased as far as two miles from the original scene of encounter and cut down without mercy by the troopers. ... Judging by the slaughter on the battlefield it was suggested that the soldiers simply went berserk.” 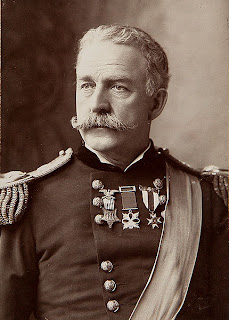 General Nelson A Miles, commanding
This film is powerful, intense, outraged and long (qualities it shares with the book) and its production values are high. Some of the acting is excellent, the characters listed above but also, in particular, two actors who have come to corner the market in Indian portrayals, Eric Schweig as Gall and Wes Studi as Wovoka (Jack Wilson). Schweig was Buffalo Hump in Dead Man’s Walk and El Brujo in The Missing. Studi was Geronimo in Geronimo: An American Legend, and Charon in Seraphim Falls. They are both fine actors and the film benefits from their presence, even if the screenplay (Daniel Giat) isn’t really worthy of their talents. August Schellenberg (Cochise in Geronimo: An American Legend and Sitting Bull in the 1996 TV Crazy Horse) is also strong, again as Sitting Bull. 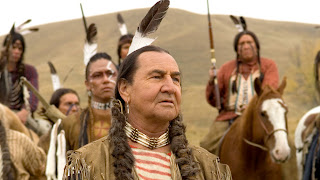 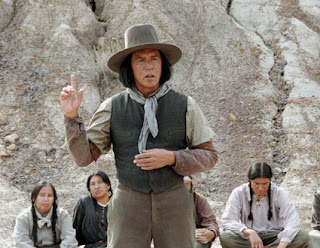 Visually Bury My Heart at Wounded Knee is striking and the David Franco photography of the Alberta locations is moving. I also liked the old photographs. There is a great aerial shot of the Battle of Little Big Horn (even if it is doubtful that the Indians rode round and round being shot as they do in old movies). The music is also appropriate. The opening and closing credits have a bit of fashionable (well, 1990s-fashionable) Robbie Robertson but George S Clinton provides a decent score. 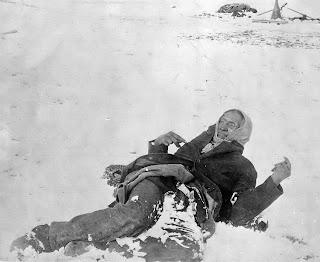 The death of Spotted Elk
The person who delivers the opening line has shockingly lazy modern diction so that you have to rewind to catch what she says (“It is easy to be brave fromsstance”). President Ulysses S Grant (Fred Thompson) is drunken, corrupt and incompetent. William Tecumseh Sherman (Colm Feore) is portrayed as a coarse brute and Nelson Miles (Shaun Johnston, looking like a Carradine) not much better. The two girls in the opening shots turn out to be boys. The Indian agent (JK Simmons) looks exactly like Raymond Massey.


The film is long, worthy, in many ways admirable but, sorry, didactic and a bit ponderous. 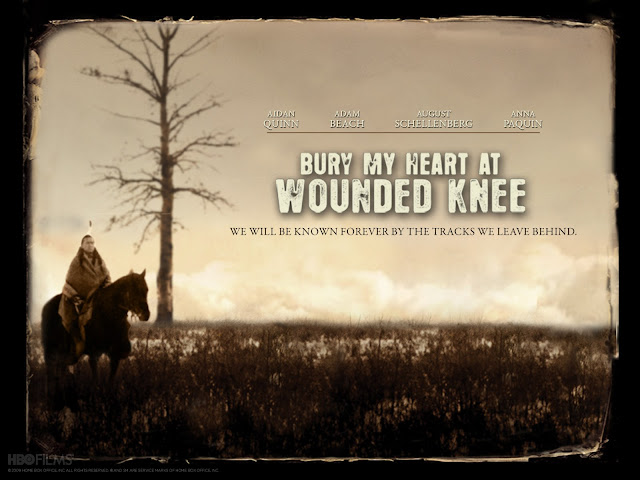