Much of the American interest in the Mexican revolution and therefore by extension (regrettably or not) world interest, has been concentrated on Pancho Villa.

Partly because of Villa's proximity to the United States, his attempt to gain political support there and indeed, when this support was given instead to Carranza, Villa's invasion of US territory in 1916 and the retaliatory invasion by Pershing's punitive expedition, all these combined to make Villa the focus of interest.

The principal years of the revolution, the 1910s, coincided with the years of the emergence of popular cultural media, notably motion pictures, and the 1914 deal done between Mutual Film Studios and Villa described in the excellent And Starring Pancho Villa As Himself meant that it was Villa that the American and wider world public concentrated on. Later film makers too all concentrated on Pancho. Viva Villa! (1934), Villa Rides! (1968), Pancho Villa (1972), even in this century And Starring Pancho Villa As Himself (2004) are examples. 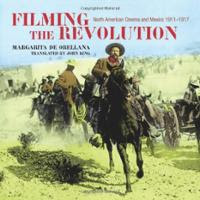 Margarita de Orellana, in her book Filming Pancho Villa: How Hollywood Shaped the Mexican Revolution (translated by John King, Verso, 2009) shows just how much the outside world's perception and knowledge of the Mexican revolution comes from the cinematic treatment of Pancho Villa. One of Villa's rivals, Venustiano Carranza, for example, hardly gets a look in, even though he became president. Ask ordinary, even college-educated people in the US (or indeed world) street to name a Mexican revolutionary and it won't be Carranza they first come up with, if they come up with him at all.

The only other non-Pancho Villa name they might cite is that of Emiliano Zapata. He would come very much second to Pancho but he might be mentioned. Academics and Mexicans might well feel that Zapata played just as  important a role as Villa but he has received far less attention outside Mexico. What attention he has received comes from, you guessed it, Hollywood.

The early 1950s Viva Zapata! is not really a Western in the purists’ view. To the hard-core Western fan, Mexican horse operas are OK if, as in The Magnificent Seven or The Professionals or The Wild Bunch, Americans go down and get involved, but straight Mexican history pics like Viva Villa! or Viva Zapata! are, well, war films or revolution films or whatever. 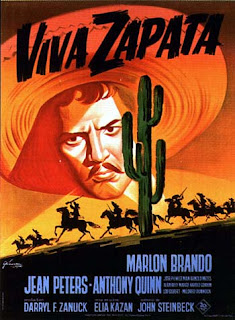 Still, Viva Zapata! is an American movie, with horses and guns, filmed in Texas (the Mexican authorities were unhappy with the treatment of Zapata and didn’t want it shot there), starring Marlon Brando and Anthony Quinn, directed by Elia Kazan for Fox and written by John Steinbeck.


These credits mean that it is superb. It’s the only horseback movie Brando was any good in. One-Eyed Jacks, The Appaloosa and The Missouri Breaks, weak films, are all even worse for his hammy part in them. But Brando is very fine as the peasant who becomes a general (Tyrone Power was the studio’s choice). 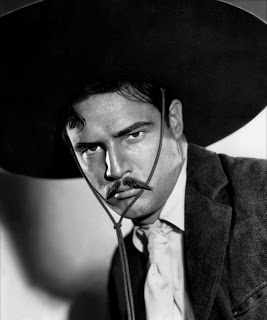 Brando very good indeed
Jack Palance said that Kazan had offered him the part of Zapata’s brother Eufemio but had reneged on that and given the role to Anthony Quinn. Quinn thought he deserved Brando’s part. Quinn is, though, outstanding, as he so often was. He received his first Academy award for his performance, and Brando and Steinbeck were nominated. 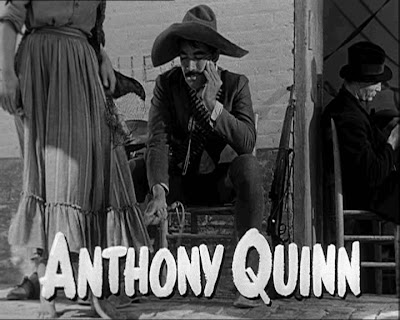 Quinn magnificent
The Kazan direction is seriously classy and the black & white photography by Mexico City-born Joe MacDonald luminous. Kazan and MacDonald together studied the famous Casasola photographs of the revolution.
The Alex North score is good and brassy and Mexican too.


Joseph Wiseman is icy as the cold-blooded Stalinist revolutionary who orchestrates the assassination. Jean Peters is moving and intense as Zapata’s wife, even though Kazan didn’t rate her and felt that Fox had imposed her as their favored star of the moment. He wanted a Mexican - though it is also true that a Mexican female lead might well have shown up the 'Mexican' Brando for the Indiana boy he was... 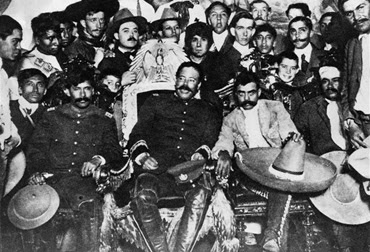 Villa and Zapata in Mexico, 1914
The reserved Emiliano Zapata was a most interesting man, far more than the glorified bandit that the mercurial Pancho Villa was. Dandy, womanizer, true believer, Kropotkin-influenced communalist, superb horseman, courageous fighter, he was not Marlon Brando but while the film may not capture the real facts of the life of the man, it does somehow capture the spirit. History is always changed in Hollywood. Various scenes never happened. Zapata did not meet Porfirio Diaz in Mexico in 1909, for example. But a lot is right and the movie is closer to the reality than many. Kazan said, “There may be more historically accurate portrayals of Zapata in other films, especially from Mexico, but I think Brando provided a wonderful interpretation.” 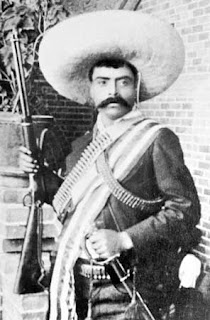 Dandy, true believer: Emiliano Zapata
The moment in 1914 when Zapata and Pancho Villa were in Mexico City is especially fascinating. Zapata was simply not interested in presidential power and ruling all Mexico. He cared only about his Morelos communes. He just walked away from it.


Alan Reed plays Villa. The trouble is, Mr. Reed was the voice of Fred Flintstone and you can’t help remembering that when you see/hear him. Viva Fred! hasn’t quite the same ring to it.


The movie is powerful and gripping. For all its Hollywood production, it is a fine portrayal of a painful and terrible yet foundational time in Mexico’s history. It’s an honorary Western only, maybe, but still a must-see. 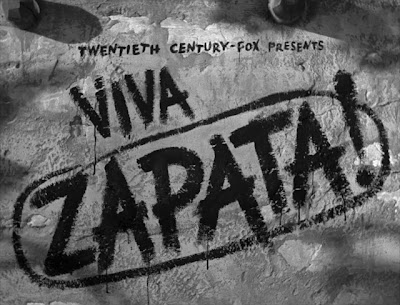 See it. Despite the exclamation point.