Clint is second to nun

Directed by Don Siegel and based on a story by Budd Boetticher, this movie ought to have been better. Perhaps it would have been if Boetticher had directed it, as he wanted to. Not that it’s a turkey but it’s rather standard post-spaghetti Eastwood. It was 1970. He still had some way to go yet before he would be making good Westerns.


In the opening scenes, second-billed Clint saves a naked woman (top-billed Shirley MacLaine) from being raped only to find, when she dresses, that she is a nun. Although she does nunnish things, such as wanting to give the rapists a Christian burial, Clint ought to have spotted right off that something was amiss by Shirley’s heavy false eyelashes. Little by little, as she swigs whisky and swears like a trooper, he does find it odd, although it takes rather a long time for the penny to drop. Einstein he ain’t. He doesn’t even wonder why a nun should help him (spectacularly) blow up a train with dynamite. Perhaps he thinks that’s what nuns do. 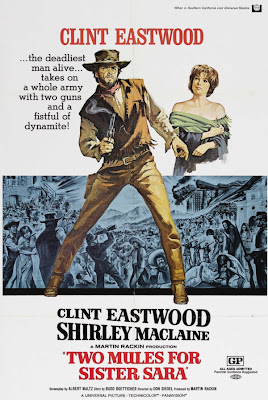 So it’s not exactly The African Queen or Rooster Cogburn here. More of a kind of Butch Cassidy buddy movie.


It’s a Juaristas-against-the-French tale set in Mexico, and indeed it was made in Mexico by a Mexican company (jointly with Malpaso) and crew, with many Mexican actors. In reality, although the Washington government in the 1860s was actively helping the Juaristas, most Texans in Mexico during and after the Civil War were pro-Maximilian (think of Ben Thompson and Phil Coe, for example). The Confederacy offered to recognize Maximilian. But never mind. I’m sure there were some on the Liberals’ side. 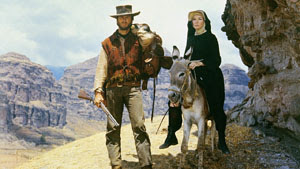 The movie has rather ugly jangly guitar plus folk instrument music in the spaghetti style by Ennio Morricone, a poor composer of music for Westerns. Sara and Hogan (Clint) have their own themes, like a (very) poor man’s Wagner opera.


Clint, who is only pro-Juarista for the money, is unshaven, squints and chews on a cheroot, so no surprises there. This movie is actually more spaghettiesque than the first Western he made after the Dollars trilogy, Hang 'em High. He has gone backwards.


It is nicely photographed by the famous Mexican cinematographer Gabriel Figueroa. Some of the direction is a bit obvious or heavy-handed, such as the opening shots of a series of deadly critters. 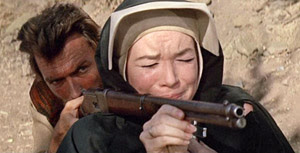 MacLaine is quite good despite her 1960s hair and make-up, although none of the supporting actors stands out. There is a battle at the end in which much dynamite is thrown and Juaristas and French soldiers die in great numbers, sometimes bloodily, but it's alright because they are foreign.


This is light fare and a long way from some of Eastwood’s great work (or Siegel’s for that matter). But it’s enjoyable, watchable and amusing in parts, I guess.  Mr. Eastwood was on the way and although we still had to wait two more years before he did a good Western (Joe Kidd), he was getting there.