The Star Packer was the eighth of the series of Lone Star westerns made between 1933 and 1935 and came directly after Randy Rides Alone. John Wayne, in those great calf-length jeans, is John Travers this time and becomes the sheriff when the town’s previous one is shot dead on his first day of office. John doesn’t wear a star though. Maybe he packed it in his saddle wallets and was thus a legitimate star packer. 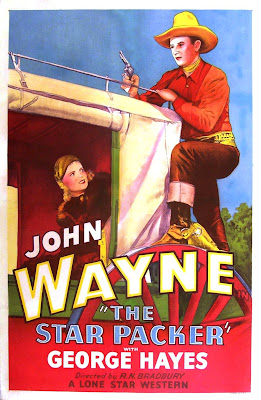 Great poster
It’s very much a case of the usual suspects. RN Bradbury directed, Archie Stout was again at the camera and Wayne was accompanied by Yakima Canutt and Gabby Hayes. Mr. Canutt plays the Tonto-like Indian sidekick of John (a Lone Ranger comparison all the more noticeable as the hero rides everywhere on a Silver-like white steed - Duke -and the Indian is constantly told to stay there and wait). The Indian is called Yak, and were it not for the fact that we know it's Yakima playing the part, we might wonder why an Indian would be named after a Tibetan bovine quadruped, bos grunniens. 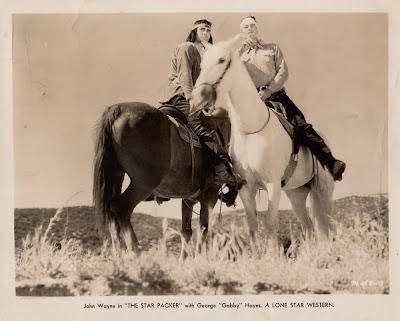 Hero on white horse, Indian sidekick, let me see, where have I seen that before?
Gabby is the (clean-shaven) badman. The plot has very much been done before: Gabby is a leading townsman but really he is The Shadow, boss man of a gang of outlaws terrorizing the town. These films loved secret compartments and hidey-holes and this one has an ample supply. The fifth-billed actor, Billy Franey, is simply listed as ‘Henchman in the stump’ and there is a hollowed-out stump in the main street conveniently placed for shooting down sheriffs.


My hero Earl Dwire is in it too but sadly is not, this time, the sheriff with handlebars but has only a minor part as ‘Henchman Mason’. The gal for John to get is bit-part actress Verna Hillie. We haven’t seen her before but she was to reappear in The Trail Beyond. She screams a lot. 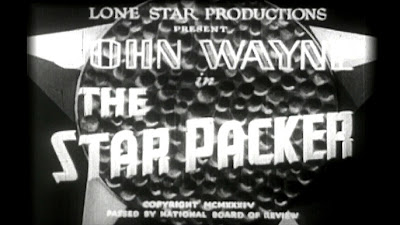 Oh, happy days
There’s a telephone and a machine gun but the latter is quickly disabled as Wild Bunch-style massacres weren’t quite the thing in 1930s B-pictures.


When the townsfolk gather in a great posse under Marshal Wayne to defeat the outlaw gang, they all considerately wear rather dashing white headbands so that we can easily see who are the good guys.


The film starts and ends with a canoe.